Why does Academia Always Resist Change? 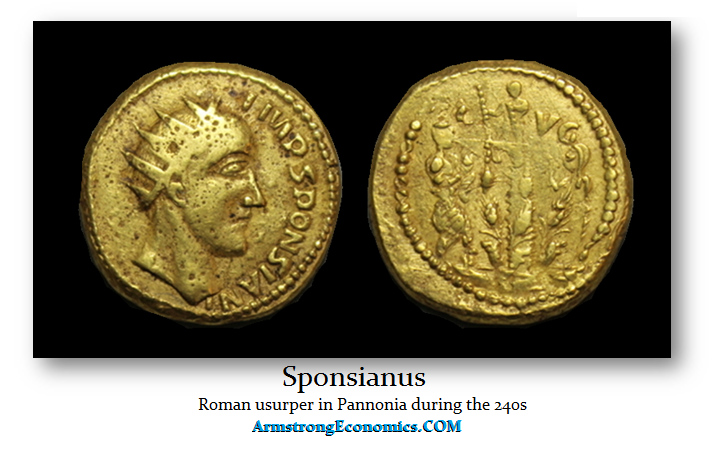 QUESTION: I find it interesting that the Roman coin the academics said was fake has now been shown that it had been in circulation. Is this what you talk about how academics are always trying to reject anything that upset their established view of science or history?

ANSWER: Absolutely. It does not matter the field. It is always the same. The Book Historia Augusta they swore was a fake and attributed it even to a monk a few years before.  Then there was Homer. They declare that was all fiction until Schleman set sail and discovered Troy, Mycena, Thebes and all the cities they said were fiction. Why this is the standard I cannot explain. They rejected Keynes until the politicians turned to the idea. They reject the existence of a Business Cycle to this very day. You have to beat them over the head with something to prove your point.

Sponsianus was aA second usurper from the Danube region, which today they claim is Ukraine.  Sponsianus appears to have come to power briefly in Dacia defending the area from an invasion of Germanic tribes of the Alamanni in 244AD during the early reign of Philip I (244-249AD) based upon coin finds bearing the name Sponsianus who was otherwise unknown to history. Like Historia Augusta, the academics immediately called the coin a fake. Anything that seems to upset the academic narrative they immediately reject regardless of the field. 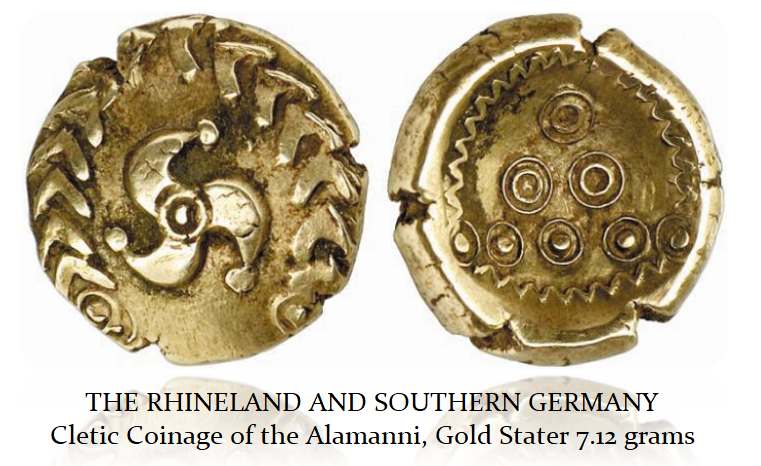 In 1713, two gold aurei bearing the name of Sponsianus were unearthed in Transylvania, Romania together with coins of Gordian III and Philip I known as the Arab. This was followed by the suggestion that Sponsianus was a usurper during the reign of Philip I after he murdered Gordian III. Instantly, most academics declared them as forgeries. Simply because they found no written record mentioning this usurper, they conclude the coin must be fake. 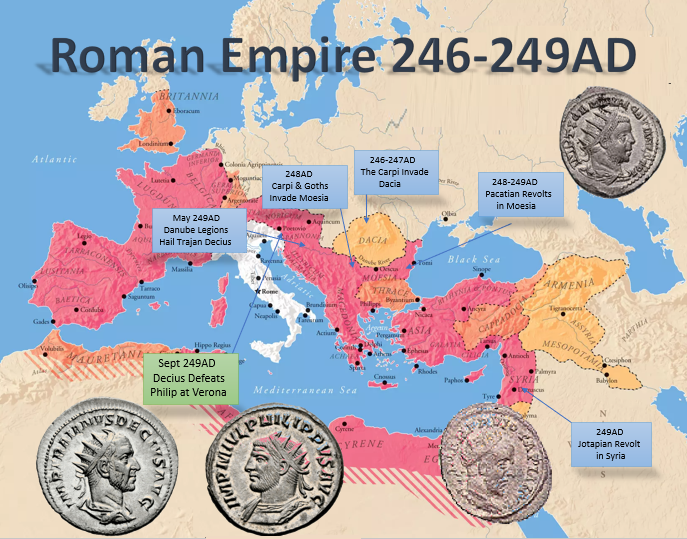 However, this was the precise period when the Goths began to invade. We know that the Carpi began to invade Dacia no later than 246AD and within one year they were joined by the Goths to invade Moesia, which included the find site which was in Transylvania, Romania. We know of one other usurper at this time in the same region Pacatian (248AD), but in the end, he was murdered by his own troops.  There was yet one other usurper – Silbannacus who is known only from a single coin that now resides in the British Museum. Silbannacus most likely led a very short-lived rebellion during this same period on the Rhine perhaps about the same time period as Pacatian in the Moesia (Romania).

Silbannacus appears to have defended the region against the Alamanni during the first half of 244 AD was coins declare a victory as well as a usurpation of power with the support of the Senate. It is possible that Sponsianus may have been Severus Hostilianus of the Byzantine sources which may have confused him with Hostiliaisn (251AD), the young son of Trajan Decius (249-251AD).

Consequently, Sponsianus may be the same person noted by his Zonaras who refers to Severos Stilianos. It may have been the usurpation of Marcus Silbannacus and his support by the Senate that forced Philip to make concessions to the Persians. No emperor Sponsianus is mentioned in the Historia Augusta.

What we do know is that Philip I had murdered Gordian III in his attempt to seize the throne. However, he was not equipped to manage the entire empire. As the invasions began from the Northern Germanic tribes, this is clearly why we see these usurpations, not from a quest to seize the throne as much as the political turmoil facing these invasions.

Trajan Decius (249-251AD) was hailed emperor by the troops on the Danube and and he marched against Philip I and defeated him and his son at Verona. However, Trajan Decius was then the first emperor to be killed in battle against the Goths. It was because of these invasions that Trajan Decius took this as the Christians refusing to honor the gods of Rome angered the gods and as such he ordered the first widespread persecution of the Christians in 250AD because of these invasions.

History of the Region

The Alamanni several Germanic tribes including the Ubii, the Sicambri, the Teneteri, the Usipetes, the Catti, and the Cherusces. They were the inhabitants of the upper and lower Rhine, and those beyond that great river, such as the Westphaliaus, the Hessians, and the Saxons, as far as the Elbe and the Weser. They did not imitate the Roman coinage but issued their own Celtic gold staters early on.

It was Drusus, during the time of Augustus (27BC-14AD) who constructed forts and established garrisons throughout this region, in order to hold the Germanic tribes in check; at the same time that he opened a road for his troops through the Hyrcanian forest. The victories of Drusus (brother of Tiberius (14-37AD) over the Alamanni were well known. However, those exploits were not followed by the expansion of the empire and the subjugation of the Germanic tribes of that region. Thus, that area was never reduced to the form of a province.

Following this period, the Alamanni inhabiting that part of Germany, which is situated between the Danube, and the Upper Rhine, were finally subdued at first by Caracalla (198-217AD), and later by Aurelian (270-275AD) Later on, the father of Constantine I the Great (307-337AD), Constantius Chlorus (393-305), while still a caesar under the Tetrarchy, overthrew them with a great slaughter. They continued, nevertheless, from time to time, to wage war against subsequent emperors, from Constantine the Great to Gratian (367-383AD). They were finally brought to subjection 496 AD when they met with a major defeat by the Franks under King Clodovicus.

The primary reason for the Academic rejection of these coins stemmed from that reverse of the coin depicts an image borrowed from coins minted by C. Augurinus dating back to 187 BC. The inclusion of the Republican era reverse has led to suggest that Sponsianus was the leader of his senatorial resistance against Philip I. In opposition to this, some academics have suggested that it is unlikely that his senatorial recognition would have used along with a Republican reverse from the coins celebrating the family of the Minucii by C.Augurinus.

because there existed emperors appointed by the Senate of Pupienus (238AD) and Balbinus (238AD) Therefore, it has been argued that if Sponsianus was supported by the Senate he would have used a more current theme for his coinage. While the series is interesting, they certainly are not conclusive. It cannot be ruled out that Sponsianus perhaps claimed his right to the throne arguing he had descended from that ancient senatorial family. After all, Constantine the Great did that with Claudius II (268-270AD) in an attempt to so some legitimacy. 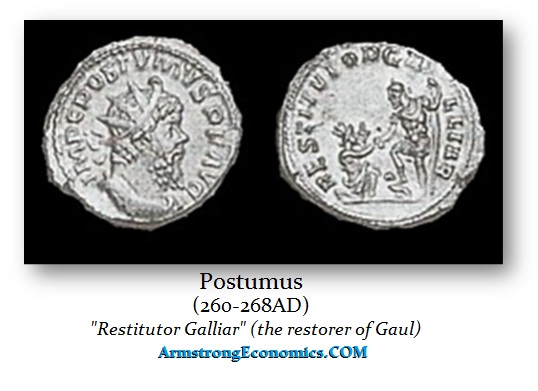 It is most likely that there were invasions in that area on the Danube frontier whereas he may have been held Emperor to defend the local region from the invaders. We have seen this before even for example Postumus (260-268AD) who claim the throne of the Gallic Empire to protect the people from invaders from the North. He issues coinage showing he was there to protect them from the barbarians which Rome could not. This region of the Danube was under attack at the time around 244 AD by the Alamanni the Germanic tribes. There have been additional ports of coins discovered in Romania that also date to this period of 244 AD suggesting that there was political instability and war in the region during that time.