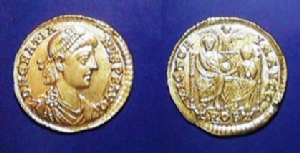 Emperor of the West
Son of Valentinian I

Flavius Gratianus was the son of Valentinian I by his first wife, Severa. He was raised to the rank of Augustus at the age of eight (367 AD). Following the disastrous battle of Hadrianopolis, in which Valens lost his life, Gratian became the senior Emperor of the West along with his 4 year-old brother Valentinian II. At the time, Gratian, who was the nephew of Valens, was nineteen years old. In reality, Gratian was in effect the sole ruler. Five months later (January, 379 AD) Gratian appointed Theodosius I to be his colleague in the East.

During 383 AD, a revolt broke out in Britain where Magnus Maximus was proclaimed Emperor by his troops. Maximus thereby invaded Gaul. Gratian found himself deserted by his own troops and Gratian attempted to flee in the direction of the Alps, but was captured at Lugdunum on August 25th, 383 AD and executed.

Gratian introduced reform to the bronze coinage around 379 AD. In addition to Valentinian I’s AE3 denomination, Gratian introduced its double, the AE2 and its half denomination, the AE4. The average weights were thus AE2 4.5, AE3 2.3 and the AE4 1.49 which closely resembled the weight standards used in the silver coinage from the Miliarense, the Siliqua and Half-Siliqua. Hoard evidence suggests that the AE3 was by far the most common bronze denomination. This reform of Gratian prevailed for the most part until the bronze reform of Theodosius I. However, following his death, while the denominations remained constant, the weights were reduced to AE2 4.5, AE3 2.27 and AE4 1.13 sometime between 383 – 386AD.