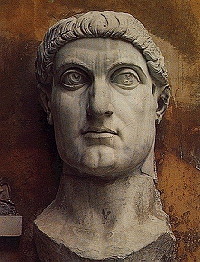 Flavius Valerius Constantinus was the son of Constantius I Chlorus by his first marriage with Helena, known to Christians as St Helena. Constantine was born at Naissus in Upper Moesia on February 27th. The year is not quite certain, however, it was either 280 – 282 or 272 – 273 AD. As we will see, Constantine was always prone to stretch the truth if not make outright false claims. In this case, the 272 – 273 time period is most likely his true birth date despite Constantine’s attempts to portray himself as a youthful leader for political purposes in later years.

Constantine was educated in the finest of Roman traditions and benefited from his experience serving at the court of Diocletian when his father was given the rank of Caesar (junior emperor) within the Tetrarchy in 293AD. Constantine remained at Diocletian’s court, most likely as a hostage, while his father traveled. Constantine accompanied Diocletian in his campaign against the usurper Domitius Domitianus in Egypt.

As Constantine became of age, he entered the military. He became a successful tribune (officer) serving as a member of Diocletian’s bodyguard and later as a bodyguard to Galerius. Constantine was with Galerius on his campaign against the Persians in 297 – 298 AD.

In 305 AD, Diocletian and Maximian abdicated carrying out Diocletian’s vision of the new system of the Tetrarchy. Once every 20 years, the joint Augustii would retire and the two Caesar’s would take control of the Empire and appoint two new junior partners raising them to the rank of Caesar.

The two new Augustii were Galerius and Constantius I Chlorus. Lactantius tells us that many were surprised that Constantine was not given the rank of Caesar. But Galerius was certainly the more dominant of the Augustii and as such he was stacking the political deck so to speak. Whatever the case, the two new Caesars were Severus II, a close companion of Galerius, and Maximinus II Daia, nephew of Galerius. The house of Constantius was slowly being pushed out of the Tetrarchy system.

In 306, Maximian’s son, Maxentius, used the loyalty of the troops towards his father and the bitter resentment of new taxation imposed by Severus to take control of Rome in a rebellion on October 28, 306AD. He too had felt overlooked in this power struggle and demanded recognition. Despite being married to Galerius’ daughter, Maxentius and Galerius were never fond of each other. Constantine, recognizing an opportunity when he saw one, made an alliance almost immediately as a counter measure to the considerable influence and power held by Galerius in the East.

Severus was ordered by Galerius to march against Maxentius. He failed to capture Rome and eventually surrendered to Maximian with the promise to spare his life – a promise, which was quickly broken. Then Galerius himself attempted to invade Italy but also failed and retreated. 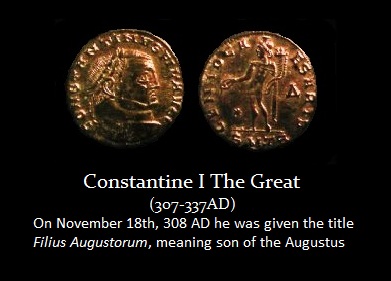 On November 18th, 308 AD, Galerius called a conference at Carnuntum on the Danube, but Maxentius was not invited. Galerius tried to convince Diocletian to return to the throne but he refused. Galerius then demanded Maximian retire for a second time and he then appointed another trusted friend Licinius as the second Augustii. Constantine and Maximinus II Daia were expected to remain at the rank of Caesar. They were given the title Filius Augustorum, meaning son of the Augustus. However, within a year, both Constantine and Maximinus II Daia assumed the titles of Augustus and Galerius could do little to prevent their claims. The Tetrarchy was collapsing.

While Constantine launched several expeditions against the Alamanni and the Franks along the Rhine, Maximian was determined to cause trouble a third time. Now he seized power of Arelate (Arles) grabbing the treasury there and then seized Massilia (Marseille) with plans to most likely launch a maritime invasion of Italy. Constantine immediately besieged Maximian, compelled him to surrender and probably put him to death in 310 AD.

Constantine’s rule had been supported by Maximian. However, after disposing of his father-in-law, Constantine felt vulnerable and needed some basis upon which he could claim a hereditary right to the throne. This is where Constantine invented a hereditary line to Emperor Claudius II Gothicus and even issued posthumous coinage in Claudius’ honor to strengthen his claim. 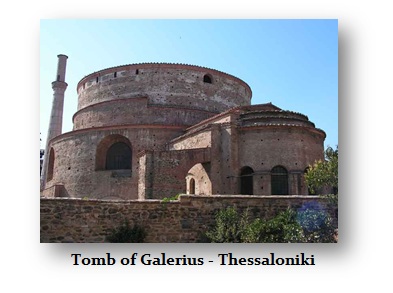 In 311 AD, Galerius died of a horrible disease and was buried in Thessaloniki leaving four main contenders: Constantine with Gaul, Britain and Spain; Maxentius with Italy and parts of Africa; Licinius with the Danube region; and Maximinus II Daia with the powerful East. The Tetrarchy had turned into a system of 4 Augustii and no one willing to accept the status of junior partner with its title of Caesar. 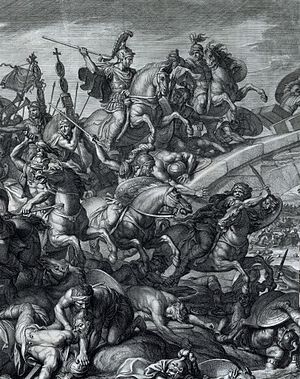 Constantine turned toward Licinius and formed an uneasy alliance against Maximinus II Daia and Maxentius. In 312 AD, hostiles broke out when Constantine took the chance of marching against Maxentius. Despite being seriously outnumbered, (100,000 to 40,000) Constantine’s legions pressed over the Alps, and in a series of victories he pushed Maxentius to the very gates of Rome. There the future of the Empire was decided on October 28th at the battle of Milvian Bridge. It was at this famous battle when Constantine claimed to have received a vision from Christ foretelling of his victory if he marched into battle under the sign of the cross. Indeed, Constantine had the Christian symbol painted on the shields of all his men and Maxentius was defeated and drowned in the Tiber while trying to flee from the battle. Constantine thus entered the Eternal City as the virtual ruler of the Western half of the Roman Empire.

Licinius greeted Constantine’s success with great enthusiasm. In 313 AD, Licinius married Constantine’s sister Constantia and the two issued the famous Edict of Milan, which officially ended the persecution of Christians. Thereafter, Licinius set out with an army to destroy Maximinus II Daia. After Licinius’ victory, once again two Emperors now controlled the East and the West. In 315 AD, the Senate voted Constantine a triumphal arch, the last to be built in Rome. While the Arch of Constantine depicted Constantine, it also incorporated panels taking from other Emperor’s works with the round medallions coming from a Hunting Arch of Hadrian. However, for Constantine, his ambitions were not satisfied by an arch. For him, ultimate power knew no boundaries.

By 316 AD, tensions between Constantine and Licinius began to rise as they tested each other for control of the Balkans. However, an initial victory for Constantine in one battle was not followed by a string of successes, as was the case with Maxentius. This time, a temporary peace was concluded, which established new frontiers. But in 323 AD, Constantine marched against the Goths in the Danube region. Constantine, determined to be sole ruler of the Roman World, used his pursuit of the enemy as an excuse to openly violate the borders with Licinius. Finally, in 324 AD, Constantine launched another campaign and the two rivals now met on the battle field once again at Hadrianoplis (Adrianople) on July 3rd, 324 AD. Licinius’ army finally broke rank after losing a battle at sea on September 8th and Licinius was forced to surrender. The Roman Empire was now in the hands of one man. While Constantine initially spared the lives of Licinius and his son based upon the plea of his sister, that word was broken shortly thereafter and both were executed. 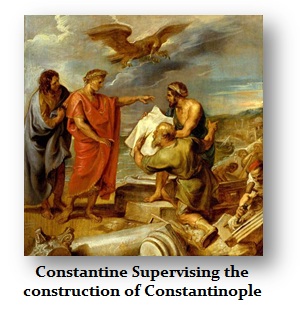 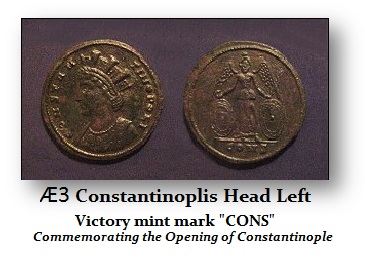 Flavius Valerius Constantinus transformed the Roman Empire and helped shape the future course of Western civilization. As sole ruler, Constantine instituted reforms in virtually every aspect of government from legal & bureaucratic to taxation and of course the monetary system. He also founded the city of Constantinople which became the new seat of power for the Roman Empire. Construction began in November 324 AD and the city was finally dedicated on May 11th, 330 AD.

Personal problems for Constantine were just beginning. With his new found power came internal family struggles. Constantine’s first wife Minervina had bore him a son who was named Crispus. Constantine had raised his eldest son Crispus to the rank of Caesar in 317 AD, clearly designating him as the logical heir to the throne. But like his father, Constantine had entered into a political marriage with Maximian’s daughter Fausta, who also bore him three additional sons, Constantine II, Constantius II and Constans.

While traveling with his father to Rome in 326 AD, Crispus was executed on the order of Constantine himself. The circumstances are not completely clear. However, it may be that Crispus was falsely accused by his stepmother, Fausta, of attempted rape. Whatever the case, Constantine showed no mercy towards his own son. In a repeat of the family struggle between Alexander the Great and his father Philip II, a stepmother appears to have come between two talented men. Whatever the case, later that very same year, Fausta was executed on suspicion of adultery while others believe it was for revenge on Crispus’ behalf. 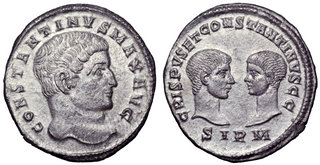 To make matters worse, the court at Constantinople also had nine male relatives belonging to Constantine’s half-brothers and sisters born by his father Constantius I Chlorus and Theodora, instead of Helena. The question of what to do about an heir was certainly far from easy and the likelihood of civil war was great.

In 335 AD, Constantine divided the Empire into four regions over each he appointed a Caesar, Constantine II, Constantius II, Constans and Delmatius. The easternmost provinces were given to Hanniballianus. It appears that Constantine in his mind was trying to reestablish the concept of the Tetrarchy, with Hanniballianus merely serving as a buffer with the Persians on the outermost Eastern frontier.

Constantine finally decided that he would accept baptism in 337 AD, which has given rise to many questions as to his true devotion to Christianity or did he simply use it to rally the masses for political support. Whatever the case, shorty thereafter, Constantine travelled to a state-owned villa at Achyrion quite near Nicomedia. Upon his arrival, he laid down on a white couch and died peacefully. The body was laid in a coffin made of gold and covered with purple draperies and transported to Constantinople. In the great hall of the imperial palace, the body of Constantine lay in state with full imperial robes and his gold diadem. His body was attended night and day as countless men and woman waited in line to pay their last respects.

Upon the arrival of Constantius II, the final funeral possession began. His body was carried to the Church of the Holy Apostles where it was buried in the central drum of the building. It was later removed to a separate mausoleum around 356 – 357 AD. The coffin, originally intended for Constantine, was most likely used for the unexpected death of his mother Helena.

The three sons of Constantine at first hesitated in claiming their inheritance and for a brief period Constantine the Great, despite being dead, was still the official ruler of the Empire. However, the hesitancy appears to be more of a plan than of confusion. For after luring all descendants to the palace, the sons of Constantine quickly disposed of possible rivals within the imperial family by massacring no fewer than nine of the male descendants of Constantius I Chlorus and Theodora. Instead of the envisioned Tetrarchy, they merely apportioned the Empire between themselves.

Constantine carried out a major monetary reform throughout his reign beginning from the time he was merely a junior partner holding the rank of Caesar. A new weight standard was employed for the gold and new denominations were added to the silver. Bronze coinage also underwent major reforms, usually for the worst, with a continual steady decline in size and weight. 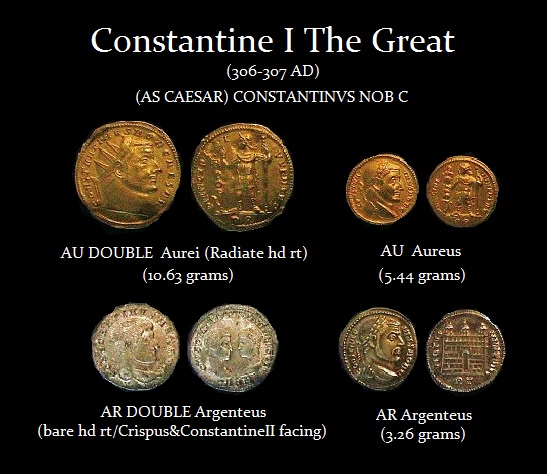 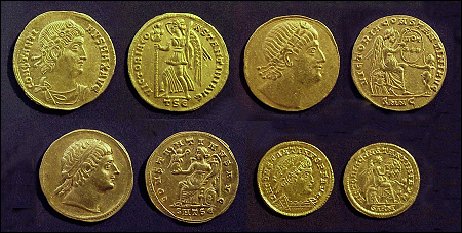