Marcus Aurelius Valerius Claudius Gothicus II was most likely from Upper Moesia. Claudius appears to have been an accomplished soldier originally serving as a tribune under Trajanus Decius and Valerian I. Under Valerian, Claudius rose to the highest rank of supreme commander of the legions in the province of Illyricum.

In 268 AD, Claudius joined the legions of Gallienus serving as one of several generals. When one of Gallienus’ other generals Aureolus rebelled against the Emperor, it was Claudius who assisted in the siege of Mediolanum (Milan) where Gallienus was murdered by assassins in the heat of the battle. Without an Emperor, the troops then hailed Claudius as Augustus over general Aurelian. Claudius crushed the mutiny and promised a large donative to each man for their loyalty. Claudius then resumed the siege of Milan, worked out a cease-fire with Aureolus, and had him put to death.

Claudius then turned his attentions toward the Alamanni invasion and Goths along the Danube frontiers and in the Balkans. Through a series of impressive victories, Claudius crushed the barbarian invaders earning him the title of Gothicus.

Still, the barbarians continued their relentless pressure upon the Roman frontier. In 270 AD, it was the Juthungi who now crossed the Danube. General Aurelian was placed in charge of finishing off the Goths while Claudius marched to Sirmium, where he became ill with the plague and died.

Claudius’ reputation as a defender against the Goths led to him being remembered for decades to come. Constantine the Great claimed that Claudius was a member of his family. This is highly suspect due to the lack of evidence and Constantine’s boasts in an attempt to support his claims to the throne.

There is little doubt that the age of Claudius II was one of turmoil and chaos. The borders of the Roman Empire were under siege on every front. While Claudius was succeeded by his brother Quintillus, the ambitious general Aurelian soon captured the throne for himself. While Romans fought between themselves overpower, the Empire remained in chaos with the Gallo-Roman Empire under control of Victorinus, Zenobia of Palmyra creating unrest in the East, and the barbarians ( Juthungi, Vandals, and Goths) still threatening the frontiers.

Posthumus Coinage by Quintillus & Constantine I

Silver coinage was not a part of the Roman monetary system during this period. However, the existence of unique silver denarius of Claudius does exist. Strangely enough, another unique silver denarius also exists for this period struck by Tetricus I. In both cases, this may represent some special donative issue or maybe an attempt to reintroduce a new silver denomination, which was eventually accomplished 15 years later by Emperor Diocletian. A silver denarius is also known under Emperor Florianus. 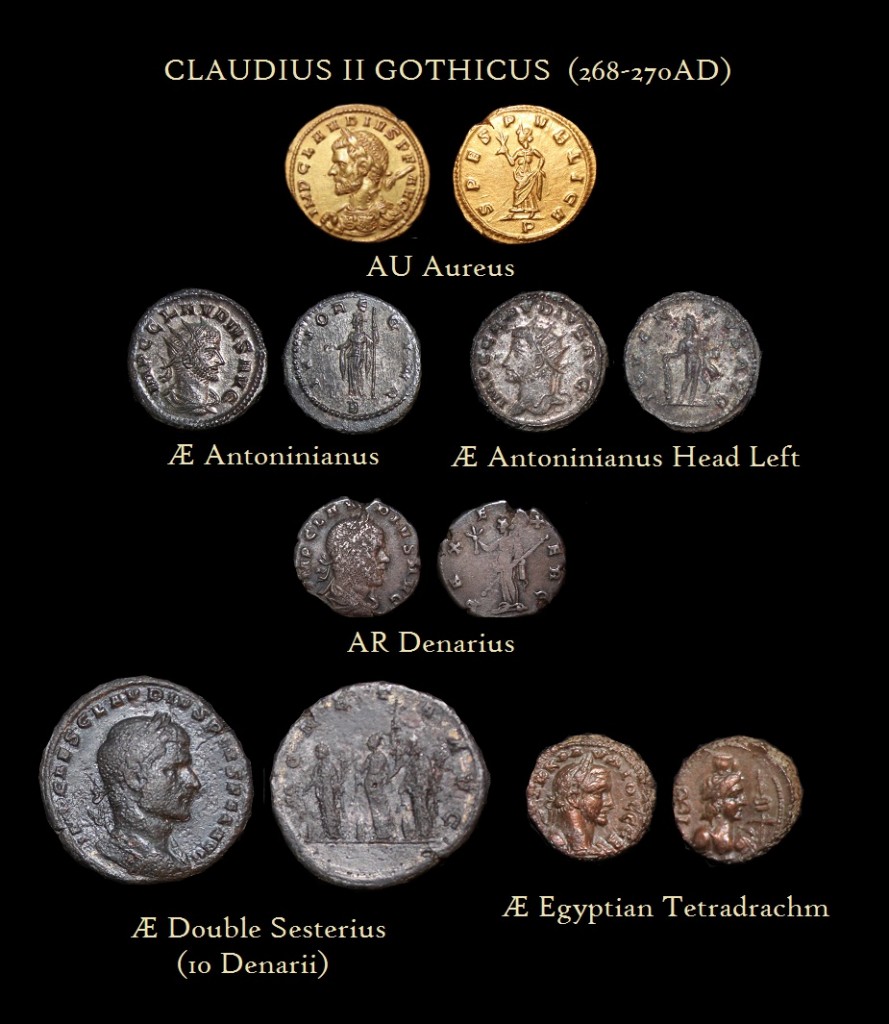 Claudius II was one of the few emperors of the 3rd century to be held in high regard for several generations that followed. Posthumous coinage was of course struck for political reasons by his brother Quintillus. However, Constantine the Great also struck commemorative coinage in his honor for political reasons as well. Constantine, in his quest for power, also claimed to be a blood descendant of Claudius.

by Constantine the Great

The term ‘barbarous coinage’ of the 3rd century refers to imitative coins that are typically crude in style. Their origin stems from the use of Roman coins outside the empire and as a result, there was a high demand that was not often met. Consequently, the shortage of official coinage was compensated by the strike of imitative coinage that was underweight, but there was no real intrinsic metal value. Like US dollars circulate in Russia and China, it is the confidence in the foreign government that provides the inherent value to the monetary instrument rather than the metal content.