First emperor from the Balkans

C. Messius Quintus Traianus Decius was born about 201 AD in the Balkans at Budalia of Lower Pannonia. Decius not merely came from a military background but had also attained senatorial rank early in his career serving as consul in 232 AD. Decius was also governor of Lower Moesia. He then served as governor of Hispania between 235 and 238AD followed by urban prefect in Rome under Philip I.

Philip I hardly provided inspiration during his reign. Numerous uprisings along the northern frontier had taken place internally, not to mention the constant threat of the Goths. The failed rebellion of Pacatian in Upper Moesia prompted Philip to dispatch Trajan Decius to restore order to the region. Philip’s great mistake was to appoint Trajan Decius governor of both Moesia and Pannonia making him one of the most powerful men in the empire in terms of the number of legions at his command. The dissatisfaction of the troops in the Balkans still remained despite the murder of the usurper. Decius set about to stem the tide of the invading Goths and after his success, the troops convinced Decius to accept their decision to promote him to the office of Emperor.

Trajan Decius and his legions marched on Rome and confronted Philip around September 249AD in Macedonia. Philip was soundly defeated and died in battle. When the news of Decius’ victory reached Rome, the praetorians immediately murdered Philip’s young son – Philip II.

Decius then advanced to Rome where he took the reins of power. At this time that he took the surname “Trajanus” in memory of Trajan (98 – 117 AD) and his great Dacian victories. Decius then began a series of economic and monetary reforms as well as public works including the construction of baths and the restoration of the Colosseum. However, Decius is remembered for his severe persecution of the Christians, during which Pope Fabian was killed.

In 250AD, the Goths crossed the Danube once again terrorizing Thrace. Decius raised his son Herennius Etruscus, named after his mother Herennus Etruscilla, to the rank of Caesar. There was also another usurper, one Titus Julius Priscus, who was killed shortly thereafter. However, the following year brought another usurper Julius Valens Licinianus in Rome itself with the support of the Senate. However, by the end of March 251 AD, Valens was murdered.

Trajan Decius raised his son, Etruscus, to the rank of co-emperor in 251 AD and his youngest son, Hostilian to the rank of Caesar. Shortly thereafter, Trajan Decius and his eldest son Etruscus were both killed in battle against the Goths. Decius was the first Roman Emperor to die in battle by an external enemy. Hostilian died later that year due to the plague.

Trajan Decius enacted a major monetary reform concerning both the bronze and the gold coinage. This reform is a reflection of the growing hyper-inflationary pressures that were developing during the 3rd century with great momentum. Decius reintroduced a Double Aureus, which had previously made a brief appearance during the reign of Caracalla (198 – 217 AD). We also find the introduction of a Double Sestertius. This spectacular large bronze denomination was in fact close in weight and size to the sestertius of the Julio-Claudian era. The introduction of this denomination suggests that the older sestertii may have been valued on the street at a much higher premium than that of the current issues. The hoarding of older sestertii was most likely the result, much as was the case in modern times when silver was withdrawn from the coinage during the mid-1960s. The Double Sestertius appears to have been introduced at about 39 grams but quickly declined to 29 grams. The Double Aureus weight appears to vary between 6.2 and 5.6 grams compared to an average weight of 4.5 grams for the aureus itself. Therefore, both these new denominations were in fact an extension of the current inflation by allowing higher denominations to be coined at only a 50% increase in the cost of production. 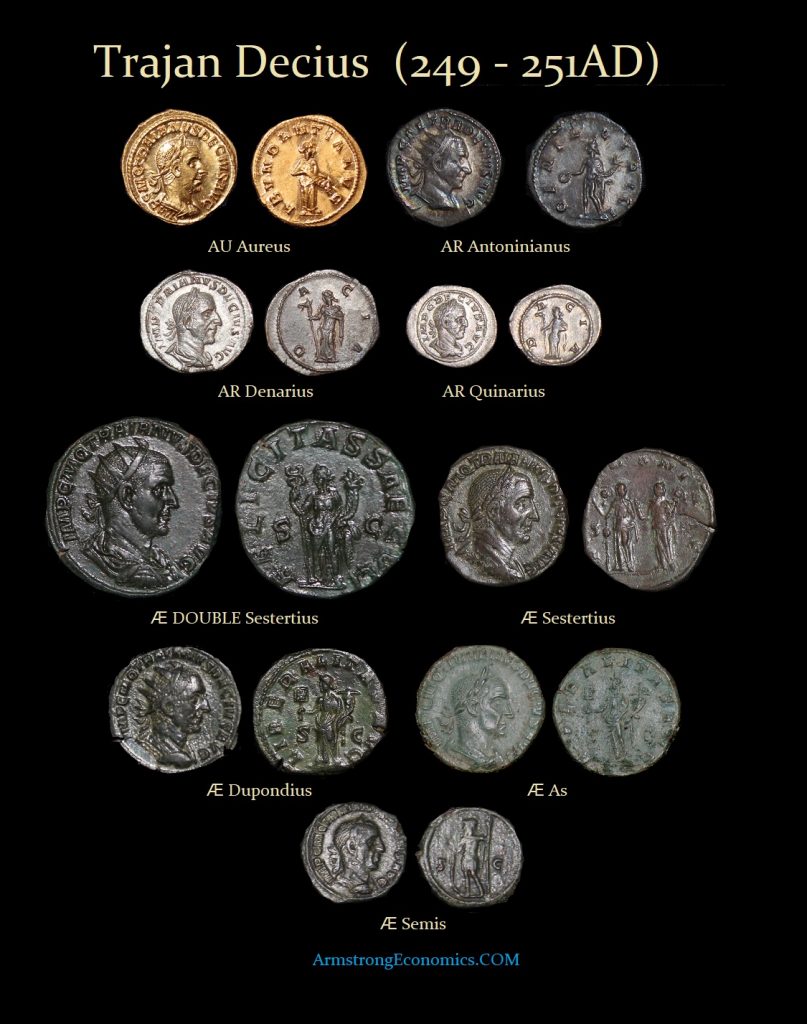 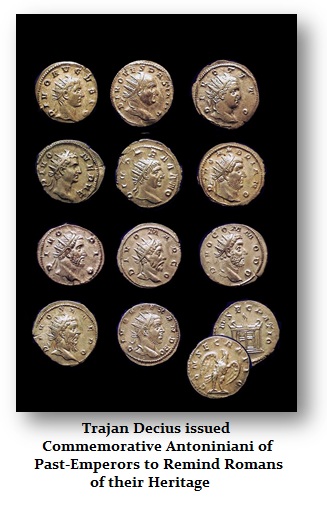 Trajan Decius struck a series of antoniniani commemorating many of the deified Emperors of Rome from Augustus to Severus Alexander. The series is known to have two reverse styles and altar or an eagle. The last such great commemorative series had been struck by the Emperor Trajan (98 – 117 AD).