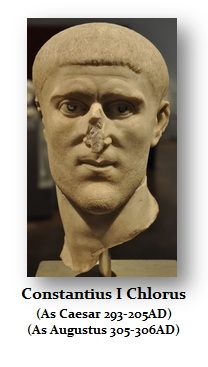 Flavius Valerius Constantius I Chlorus was most likely born in the Danube region. Constantius apparently fell in love with an innkeeper’s daughter named Helena in Naissus located in Upper Dacia. This is the location of the birth of their first son who would later become known to history as Constantine I the Great. Despite later claims of being a descendant of the former Emperor Claudius II Gothicus by his son Constantine, there was no connection whatsoever and the story was merely a fictitious tale created to legitimize Constantine’s ambition for power.

Little is known of the early career of Constantius Chlorus. He had risen in stature to become Governor of Dalmatia. Following the death of Numerian, Diocletian, who had been commander of the Praetorian Guard, was proclaimed Emperor by the troops in 284 AD and following the assassination of Carinus, emerged as sole ruler of the Roman Empire by 285 AD. Obviously, Constantius Chlorus must have proven himself to be a loyal and trustworthy military leader. Sometime prior to 293 AD, Constantius had risen to the position of Prefect of the Praetorian Guard under Diocletian. Another military leader came to power named Maximianus when a revolt broke out in Gaul and Diocletian sent him against Amandus and Aelianus. Upon his successful conquest over the Gaulish usurpers, Maximianus was given the rank of co-Augustus by Diocletian in 286 AD.

Diocletian’s abilities were much more so in the field of reform and statesmanship, while Maximianus was the popular leader among the Army. It was thus Diocletian’s vision of a stable rule by establishing a system that became known as the Tetrarchy whereby two joint Augustii would rule with two junior Caesars as heirs in the wings who served as Consuls. It was during that time when Constantius chose to follow his ambition by divorcing Helena in favor of a marriage link with the new co-ruler, Maximianus with his daughter Theodora.

In 293 AD, Constantius was admitted to Diocletian’s new vision by being raised to the rank of Caesar. It was therefore his role to serve under Maximianus in the West while Diocletian concentrated on ruling the Eastern provinces. At the same time, Galerius, another leader who had risen through the ranks of the military, was also given the rank of Caesar. Galerius also divorced his wife and married Valeria, the daughter of Diocletian. It was at this time that the Tetrarchy was created.

Discovered in the Arras Hoard

Constantius’ first task was to regain the territories under the usurper Carausius – Britain and part of Gaul. Maximianus had tried to defeat Carausius with little success, therefore the task now fell to Constantius. His first move was to blockade Carausius’ stronghold in northern Gaul – Gesoriacum (modern Boulogne) in 293AD. Carausius later died at the hands of his own ambitious minister Allectus before Constantius was prepared to invade Britain. Finally, in 296 AD, Constantius began his invasion but personally was unable to land. A second fleet, commanded by Asclepiodotus (Praetorian Prefect to Constantius), succeeded to not only land, but also engaged and defeated Allectus. The glory, however, still went to Constantius as this gold medallion illustrates. Here we see Constantius being portrayed as the savior of London.

During Constantius’ rule, he did much to strengthen the frontier along the Rhine. He also began an extensive building project at Trier, the capital city of Treviri in the Gallia Belgica region. Trier was located on the Moselle River just east of modern day Luxembourg. Trier rose as a major center under Constantius who chose this city to be the center of operations for his new Caesar. Constantius began construction on a large imperial palace which occupied much of the eastern portion of the city. Much of these projects were later completed by his son including the famous Gates of Trier – Porta Nigra.

In 305 AD, Diocletian became the first Emperor to ever abdicate and Maximianus was forced to do the same. Their successors thus became Constantius I Chlorus and Galerius. But the Tetrarchy was already showing signs of strain. Galerius was a ruthless ruler who took great pleasure in persecuting Christians. He held the more powerful East and to strengthen his hand even further, he held Constantius’ son, Constantine the Great, as hostage at his court.

At this time, there was a great barbarian invasion of Britain on the part of the Picts which provided the excuse for Constantius’ request that his son be allowed to join him in defending the Empire. On July 25th, 306 AD, Constantius Chlorus died in Britain at York leaving his son Constantine to face Galerius alone. Constantius himself had won the loyalty and admiration of his own troops which would prove invaluable to his son in his quest for power.

NOTE: The monetary system as employed by Constantius I was that of Diocletian’s Reform.The early issues of the silver argentius display a large wide flan with a weight of about 3.2 grams. This coin quickly became reduced in diameter and weight dropping under 3 grams fairly quickly. The portrait styles became fairly idealized for all members of the Tetrarchy in an attempt to display a unity among the two Augustii and two Caesars. 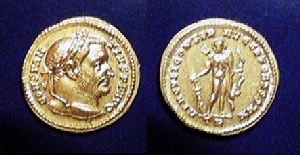 Note: Posthumous coinage in honor of Constantius was issued by Constantine and by his ally Maxentius. Maximianus, Constantius and Galerius were the last emperors to receive divine honors, for after Constantine’s recognition of Christianity the whole concept of deification became impossible. The only exception to this is the enigmatic Divus Constantinus Pater Augusto rum coinage of Constantine himself.