Drusus was the son of Tiberius by his first wife, Vipsania. Named after his brother, Nero Claudius Drusus, Drusus the younger was born about 14 BC. Drusus grew up at court and eventually married the granddaughter of Marc Antony, Livilla, daughter of Antonia. Livilla bore three children: a daughter Julia and twin boys named Gemellus and Drusus. Drusus died at a very young age and Gemellus would later find himself unwanted and unloved by most members of his family.

As his father Tiberius rose to power under Augustus, Drusus was also looked upon by Augustus favorably. In 11 AD he was given the rank of Quaestor and in 13 AD and eventually served as Consul in 15AD. In 14 AD, when his father succeeded Augustus to the throne, Drusus became the logical heir to his father.

Drusus was sent on an important mission in 14 AD following the death of Augustus. He went to Pannonia with the task of subduing the legions stationed there who had broken out into mutiny. Drusus succeeded in his mission aided by bad weather and an eclipse which proved to be the omen he needed. Drusus was given special powers as governor of Pannonia in 17 AD. 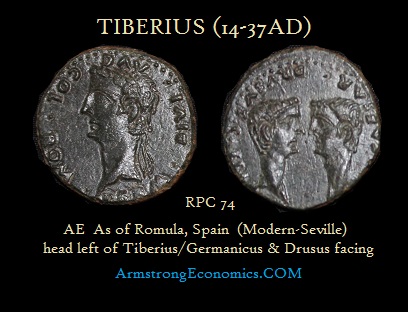 As of Tiberius with his heirs
Germanicus & Drusus facing

Drusus was not happy to find that the cousin Germanicus (father’s nephew), rising as the popular prince of the people. Germanicus had been adopted by his father as his heir in 4 AD at the time Tiberius had been adopted by Augustus. Germanicus had been given a splendid triumph in 17 AD for his success in Germany. Nonetheless, Drusus maintained good relations with Germanicus and his family. In 19AD, following the death of Germanicus, Drusus became the center of attention in the ambitious plans of Tiberius’ right-hand man, the Prefect of the Praetorian Guard – Sejanus. His father finally granted him a triumph of his own for his success in Pannonia on May 28th, 20 AD.

Drusus disliked Sejanus intensely. He did not know the extent of his ambitions or of his affair with his wife. Still, Drusus tried to warn his father about his reliance upon Sejanus and Tiberius did not appreciate his concern. They apparently argued and Drusus struck his father in the process. According to Dio, Tiberius shouted at his son saying “You will commit no act of violence or insubordination while I am alive, nor when I am dead either!” Drusus did have a reputation for being cruel and licentious to the point that in Roman slang an insult was to call someone Drusian.

In 22 AD, Tiberius finally granted Drusus the Tribunician Power. The following year, however, he fell a victim to Sejanus, who conspired with his wife to poison him. Sejanus planned to married Livilla and become the next heir to the throne. Thus, Sejanus systematically isolated Tiberius from his own family and did everything he could to insure the downfall of Germanicus’s wife Agrippina and their children. The plot came to light following a letter sent to Tiberius by Livilla’s mother Antonia. Sejanus was put to death but Tiberius did not move against Livilla out of respect for Antonia. However, Livilla was imprisoned by her own mother and either starved to death or perhaps she committed suicide. 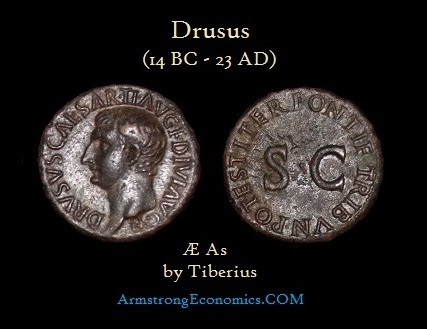 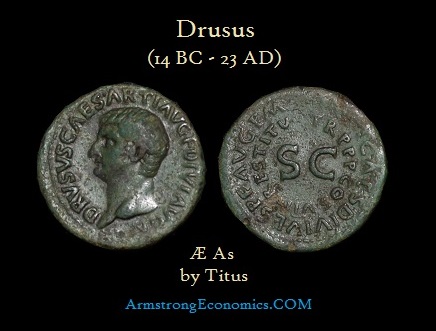 Æ As (Restitution by Titus) 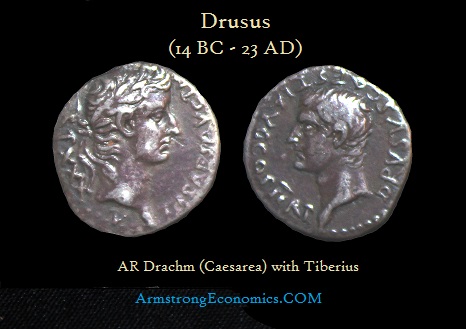