The 8.6-Year Frequency is Within Nature 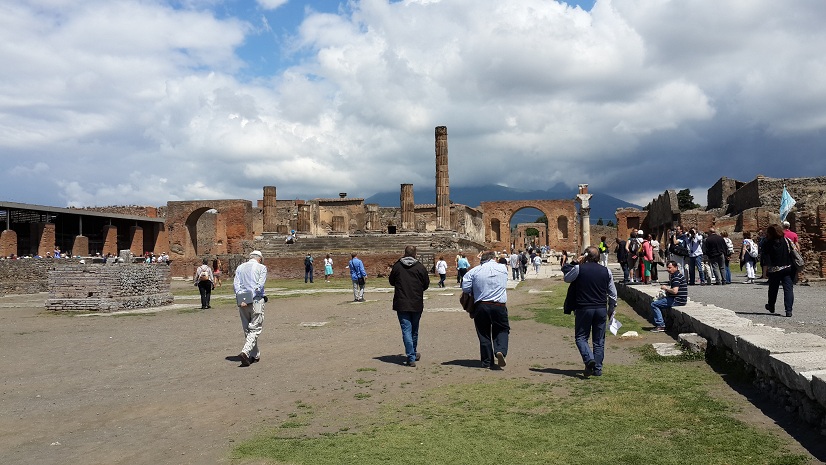 QUESTION: You have noticed that the 8.6-year frequency even allowed you to see that volcanic eruptions would begin in 2018. Are there other examples from history where you have found this to also be true or was Hawaii just unique? 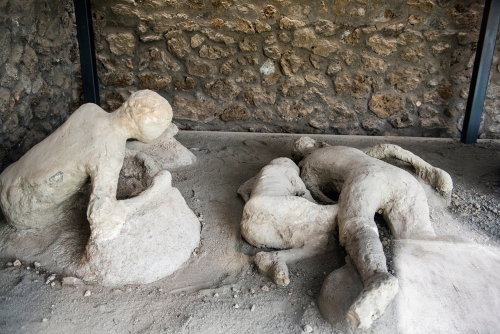 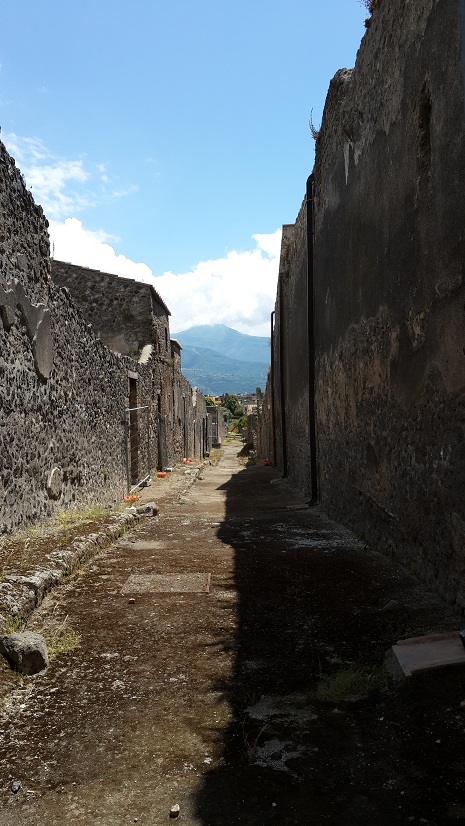 ANSWER: Oh, there are plenty of examples. Let’s take one of the most famous volcanic eruptions in history – Vesusius. Everybody has heard of Pompeii which was destroyed by the eruption of August 24th, 79AD. That eruption was so violent, it hurled stone and ash 20,000 meters (65,000+ feet) into the sky which then came down and buried Pompeii and Herculaneum. There is even a current song out on the destruction of Pompeii by Bastille.

However, there was a major earthquake 17.2 years before (2 x 8.6) that took place in 62AD which was devastating and also produced a tsunami. On February 5th, 62 AD a powerful earthquake that was probably a 7.5+ in magnitude occurred, with the epicenter at Pompeii the prelude to the eruption. The Latin adviser to Emperor Nero (54-68AD) Seneca the Younger wrote a description of the event. Sheep died from falling rocks and statues were toppled. He even said some people lost their minds and wandered around in their madness. 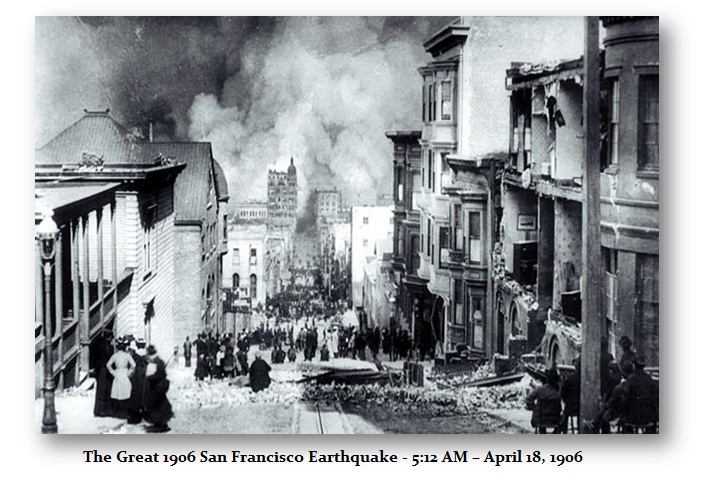 This earthquake was as significant and 1906 San Francisco earthquake which destroyed much of the city. Like the 1906 San Francisco Earthquake led to the Financial Panic of 1907, which inspired the creation of the Federal Reserve by 1913 almost 8 years following that disaster, we see similar reforms in Rome which also included a monetary system reform.

Pompeii at the time had a population of at least 20,000 and was a tightly packed city which was not particularly favorable for surviving earthquakes. Much of the city was constructed from bricks which tend to crumble easily. Seneca reported that while Pompeii was severely damaged, Herculaneum had far less damage while Naples was barely touched. He described the earthquake in vivid terms:

“What hiding-place will creatures find, where will they flee in their anxiety, if fear arises from below and is drawn from the depths of the earth? There is panic on the part of all when buildings creak and give signs of falling. Then everybody hurls himself headlong outside, abandons his household possessions, and trusts to his luck in the outdoors. What hiding-place do we look to, what help, if the earth itself is causing the ruin, if what protects us, upholds us, on which cities are built, which some speak of as a kind of foundation of the universe, separates and reels?” 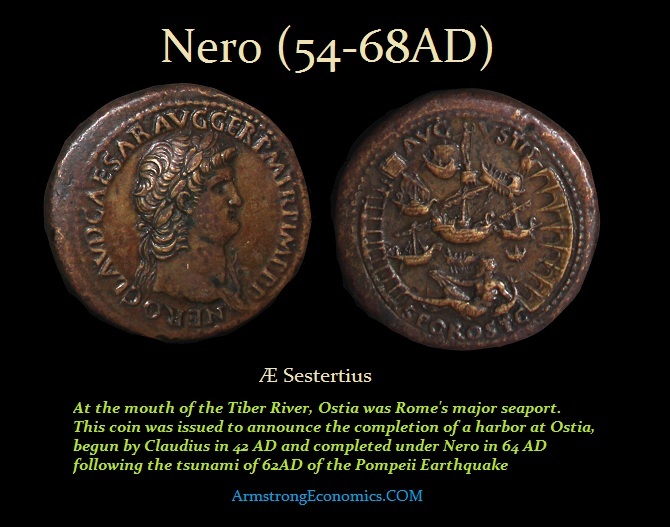 February 5th, 62AD a tsunami or tidal wave hit Ostia, the port of Rome. Whatever could go wrong for Nero would go wrong until he was forced to commit suicide in 68AD. At that moment in history, there were perhaps 300-grain ships in the harbor waiting to unload. These ships would arrive from Alexandria and Carthage once a year and had the vital grain supplies for Rome for the entire year. All of them were engulfed by the tsunami and their cargoes lost. This natural disaster created rioting in Rome for the people feared they would starve and the bankers were in a state of panic down the Via Sacra, the Roman version of Wall Street. Nero was forced to respond taking a political action that began his downfall in popularity. Nero in 62AD rationed the stored grain supplies to the people of Rome. He would later issue this coin in 64AD, two years later, announcing that the damage to the port had been repaired.

Back at Pompeii, the earthquake affected the demographics of the city. The rich patricians who used Pompeii as a summer resort decided to move elsewhere and a new class of merchants and traders took their place and rebuilt the city. Here is a dedicatory plaque at the Temple of Isis. This plaque declares that Numerius Popidus Celsinus provided the money to rebuild the Temple of Isis after the earthquake. Indeed, the process of repair was slow and extensive. We can still see the repair work in the ruins today. There were projects such as the embellishment of the Forum and repairing the city’s water supply which was also destroyed. Nero also had to contribute funds for the rebuilding of Pompeii. Perhaps, his second wife, Poppaea Sabina who from Pompeii, inspired Nero to aid the city. That is where her family was located.

The Villa Poppaea is an ancient Roman seaside villa located between Naples and Sorrento. The villa itself is quite a large structure situated in the ancient Roman town of Oplontis which most of it also remains about 35 feet below current ground level under modern Torre Annunziata.  Evidence suggests that it was owned by Emperor Nero, and it is believed to have been used by his second wife, Poppaea Sabina (30-65AD), as her main residence when she was not in Rome. 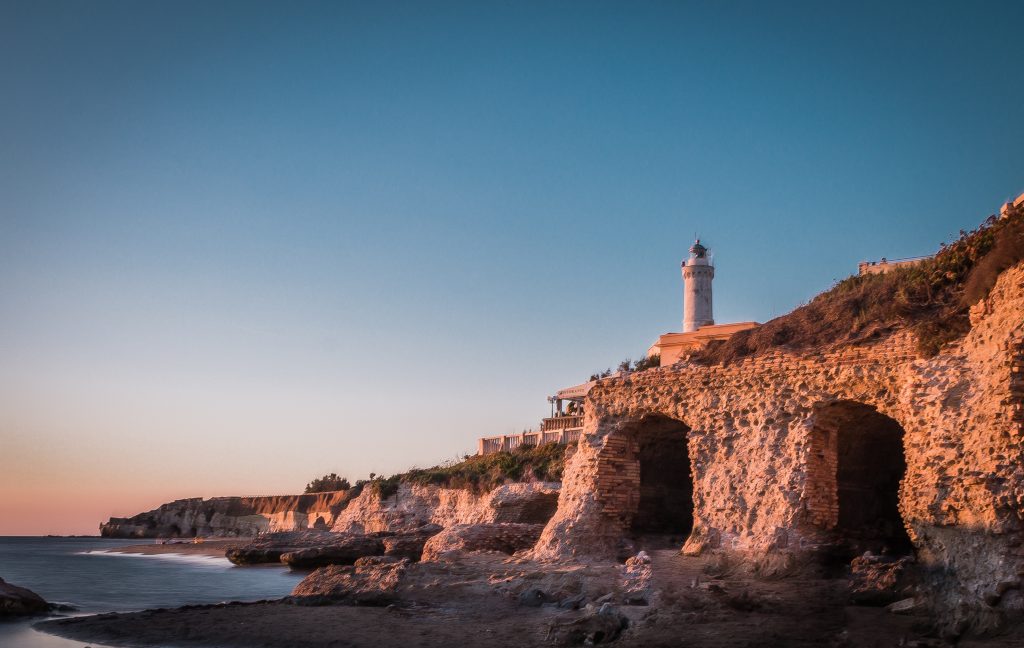 Then on the night of July 19th, 64 AD, a fire broke out among the shops lining the Circus Maximus. In a city of two million, the people were suffering under a very hot summer. Despite the claims that Nero started the fire, he himself was miles away in the cooler coastal resort of Antium. The ruins of the Villa Nero are to be found on the sea about 35 miles north of Rome in the modern town of Anzio.

Nevertheless, the Great Fire of Rome was no ordinary fire. The flames raged for six days before coming under control; then the fire reignited and burned for another three days. When the smoke cleared, 10 of Rome’s 14 districts were in ruin. The Temple of Jupiter Stator and the Atrium Vestae, the hearth of the Vestal Virgins, were all gone. Two-thirds of Rome had been destroyed.

Nero returned to Rome to organize a relief effort, which he paid for from his own funds. Nero’s contributions to the relief extended to personally taking part in the search for and rescue of victims of the blaze, spending days searching the debris without even his bodyguards. These are not actions of a man who would have deliberately torched the city. Even after the fire, Nero opened the royal palace to provide shelter for the homeless and arranged for food supplies to be delivered in order to prevent starvation among the survivors.

The historian Tacitus, in one of the earliest non-Christian references to the origins of Christianity, notes that the population searched for a scapegoat and rumors held Nero responsible. To deflect blame, perhaps Nero or someone in the administration targeted Christians. He ordered Christians to be thrown to dogs, while others were crucified and burned. But the citizens of Rome did not believe that the Christians had anything to do with the affair and preferred the political forces in play used this to blame Nero claiming he was trying to deflect blame.

What we must understand of this period is that everything was seen as a sign or action of the gods. Indeed, the Rev Jerry Falwell and Pat Robertson both said on national television that the terrorist attack of 911 on the World Trade Center was the act of an angry God who allowed the terrorists to succeed in their deadly mission because the United States had become a nation of abortion, homosexuality, secular schools and courts, and the American civil liberties union. Back then, the destruction of Rome was seen as the gods were angry with Nero for killing his mother Agrippina and Claudius’s son Britannicus.

Therefore, with the Pompeii Earthquake of 62AD, the tsunami that destroyed the food supply, and then the Great Fire of Rome all within a 2-year period, the people turned against Nero who they saw was the reason the gods were angry. It was Nero who began the first debasement of the Roman silver coinage. We do not know the exact date, but we can reach an approximate date being late 63 AD to the very worst 64AD. Therefore, it clearly appears that Nero increased the money supply post-Pompeii Earthquake of 62AD. Then the Great Fine his by July 64 AD and the amount of coinage increased output by Nero more than doubled.

Meanwhile, a continued period of seismic activity began over the course of 17 years (two 8.6-year cycles) right up until 79 AD when Mt. Vesuvius erupted destroying the towns was dangerous. However, the small tremors were only seen as signs from the gods, and the eruption in 79 of Mt. Vesuvius was largely unexpected. 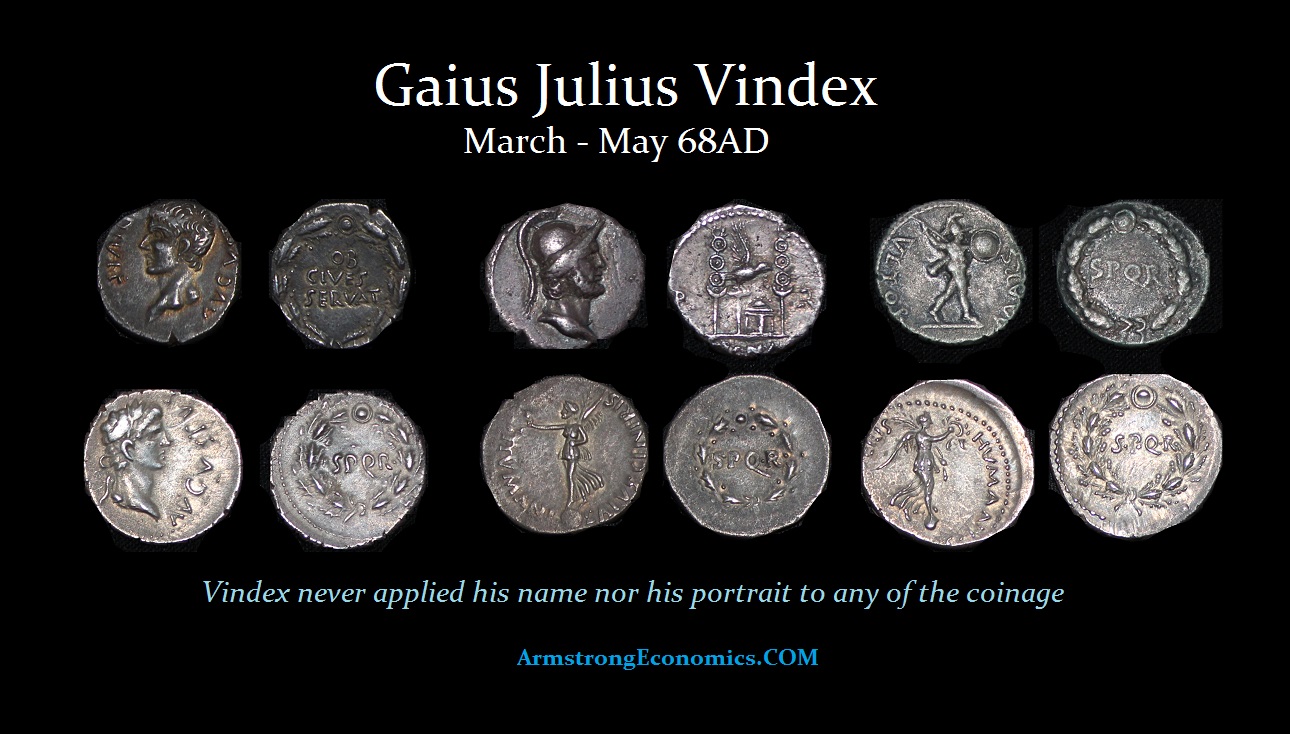 It is interesting that from 62AD, it took just 6 years to force Nero to commit suicide. One 8.6-year cycle brought us to the end of the Civil War that erupted after Nero was dead first in Spain, then Gaul, and Africa. This is also the time when the Jews revolted attempt to separate from Rome. The Gallic War ended by 70 AD. The generals rising up for power were Vindex (Mar-May 68AD), Clodius Macer (Apr-Oct 68AD), Galba (68-69AD), Otho (Jan 15- Apr 17, 69AD), Vitellius (Jan 2 – Dec 20, 69AD), and the final victor, Vespasian (Jul 1, 69AD – Jun 24, 79AD). The Civil War was over with the first 8.6-year cycle and then the second 8.6-year cycle brought the total destruction of Pompeii as well as the death of the victor, Vespasian.

« Hawaii Volcano – Right of Schedule?
When is the Next Megathrust Earthquake Due? »