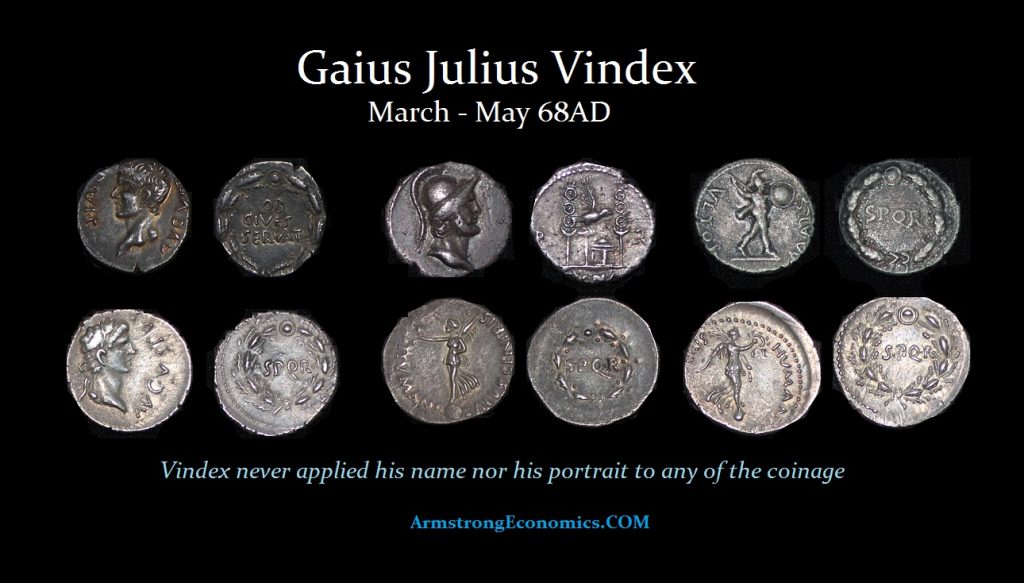 Gaius Julius Vindex (25-68AD), descended from the kings of Aquitania and the son of a Roman senator. He was governor of Gallia Lugdunenis at the time when he raised the standards of revolt in Gaul against Nero (54-68AD) in March 68AD as a reaction to Nero’s tax policy. However, Vindex had no Roman troops under his command. Consequently, Vindex then appealed to other provincial governors to support his uprising. His invitation was answered only by Servius Sulpicius Galba in Spain (Tarraconensis). Even his own provincial capital of Lugdunum refused to join his cause, though Vienna (modern Vienne) in Narbonensis did side with him and was the probable place of mintage of the coins struck during the period of his revolt. Since this was the first revolt against an Emperor, none of the coins he struck bear his name or portrait. In May 68AD, Vindex’s rebellion was crushed when his army was defeated at Vesontio by L. Verginius Rufus, governor of Upper Germany. Shortly afterwards, the Senate decided to oust Nero by declaring him a public enemy, thus spurring on Nero’s suicide. It was only a few weeks later when Nero committed suicide. Soon thereafter, Galba was formally recognized as Emperor by the Roman Senate.

Nero’s death saw the arrival of the first civil war since the defeat of Marc Antony in 30 BC. Consequently, between June 68 AD and December 69 AD, Rome witnessed a period of anarchy and a series of quick successions of generals becoming emperors. Four Emperors ruled in this period: Galba, Otho, Vitellius, and Vespasian, with the latter securing the imperial throne and founding the Flavian dynasty.