A Question of Money — Interest & Bankers

Mr Armstrong, interesting article today, the story of the store of value (at least long term) has always confused me. One can look at saving accounts also as an asset as it yields the interest payment and one relinquishes the access to the money. No difference to bonds.

But your article causes some questions: as you stated before the FED buying bonds does not increase real money supply, so what caused the decline of purchasing power of money in the asset class of equities? Is it that the manipulating of interest rates distorted the actual confidence and time preference in the economy which can be measured by the velocity?

You posted earlier that the velocity has declined. People do not want to invest but save which is not an option for big money as it doesn’t yield any or very little return. Hence enterprises buy back shares and smart money has no other option.

Interest rate hike by the FED, eventually increasing retail participation, a cooling world economy, sovereign debt crisis and the flight to the Dollar. The outcome of your computer, a rise in US stock markets including a possible phase transition, seems comprehensible.

The only thing what leaves me with amazement is what do they really intend? I don’t believe that the families who run the banking system, operating for centuries in money business, do not understand that. I can only assume that for being protected by government the banking cartel buys the governments time and keep financing the deficits.

ANSWER: The problem lies in so many areas, and though we can focus on one issue, the answer is a complexity of variables. The history of interest rates is provided on this site. Interest rates in a developed economy reflect the “option” value on the expected decline in purchasing power of money. If I expect it to decline by 5%, then I expect a profit, and say want 8%. You in turn will pay the 8% only if you think you also can make a profit above 8%, perhaps 10%+.

In an UNDEVELOPED economy, we transpose the depreciation risk of money with risk in general. Lacking any developed economy, one will lend based only upon the risk of repayment. Therefore, without a legal system, the risk is either the person or the political climate. When we look at the history of interest rates, I demonstrated that the rate of interest even within the Roman Empire increased the further you moved away from Rome. Hence, the lowest interest rates are in the dollar and they rise in other countries based upon perceived political risk. Greece’s interest rates are significantly higher than Germany’s. This is a reflection of political risk, not simply the future inflation rate in the euro.

The Fed did not increase the money supply with QE easing and we have seen that nine months of QE in Europe has also failed to create inflation. What happened to the whole theory of the quantity of money impacting inflation? The problem lies in the definition. When U.S. government debt was illegal to borrow against using it as collateral, then issuing debt DID NOT increase the money supply. When that was changed and you could post T-bills as collateral to trade, then there was no longer a difference between debt and money. 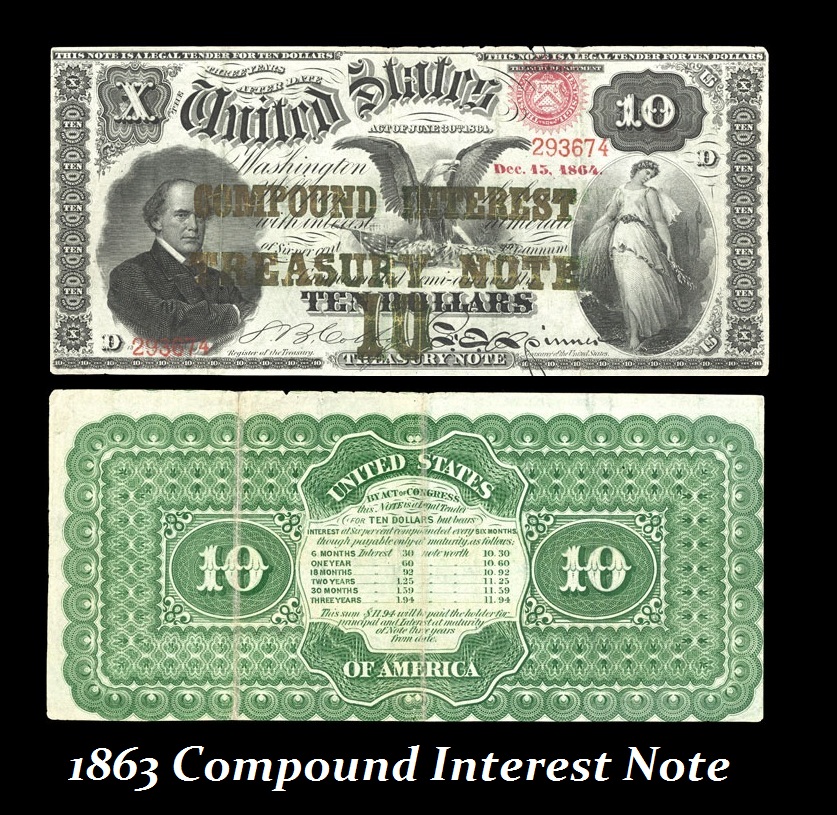 After the revolution, the U.S. government did not issue paper money until the Civil War. To encourage people to accept it (CONFIDENCE), it paid interest. In reality, this was a form of a circulating bond. The term “greenback” referred to the issues that did not pay interest and were not purportedly backed by silver or gold. You turned it over and it was just green ink with no promises. 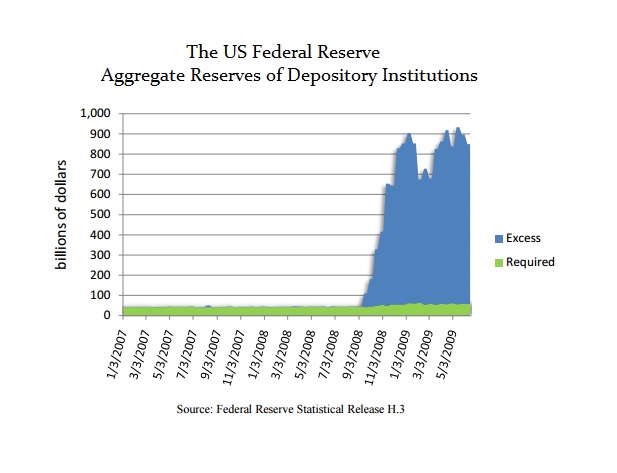 So the Fed buying in bonds did not increase the money supply and failed to create inflation as expected BECAUSE it merely swapped bonds (money paying interest) with non-interest paying money (electronic entries). The bankers then complained so the Fed created the Excess Reserve Facility, where banks have nearly $3 trillion in cash. The SF Fed argues that Milton Friedman said they should pay interest on reserves. That was only on the required reserves. The creation of the Excess Reserves totally negated the entire idea of stimulating the economy for the banks never lent the money out. It became a giant swap of bonds for cash deposits, of which the Fed then had to pay 0.25% interest. 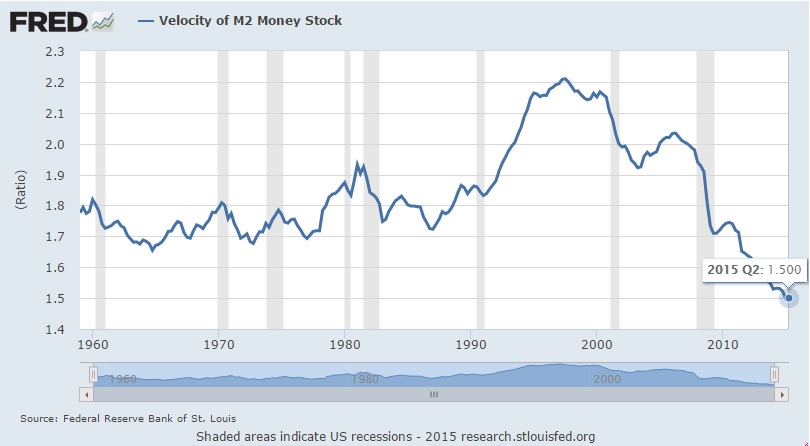 So now turning to the VELOCITY of money: a decline here demonstrates that people are HOARDING cash (rising in purchasing power as assets decline), as well as banks (Excess Reserves). We have companies buying back their own stock, further shrinking the supply of equities, and fueling the deflationary spiral. The Excess Reserves at the Fed show just how much banks are hoarding cash.

Therefore, we can see the deflationary trend and the contraction right here. The U.S. share market has been at the high-end of trading, but it did not breakout beyond our second target of 18500 on the Dow. The market indeed doubled as we warned, coming out of the hold in the 6,000 level and passing 12,000, which is the MINIMUM requirement to start a Phase Transition. We nearly tripled by the 2015.75 target beating our minimum doubling requirement, but this was still not a Phase Transition. Why? Retail participation has been at record lows in stocks. This is a bubble in government debt — it is the reason why we are at a 5000-year low in interest rates.

Now top the conspiracy, as worded by one of our e-mailers: “The only thing that leaves me with amazement is what do they really intend? I don’t believe that the families who run the banking system, operating for centuries in money business, do not understand that. I can only assume that for being protected by government the banking cartel buys the governments time and keep financing the deficits.” 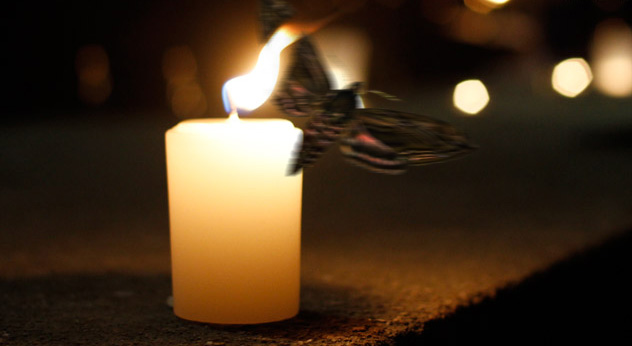 Banking establishments are some of the WORST investors throughout history. They always go bust and government devours them every single time. Yes, the government has been protecting the bankers for they have also been fueling the debt and assisting governments to borrow. Therein lies their own demise. EVERY major banking house has been destroyed by this very same flirtation with power. They are like moths attracted to the flame of a candle, hoping to dance by the light and never realizing their wings may get burned. 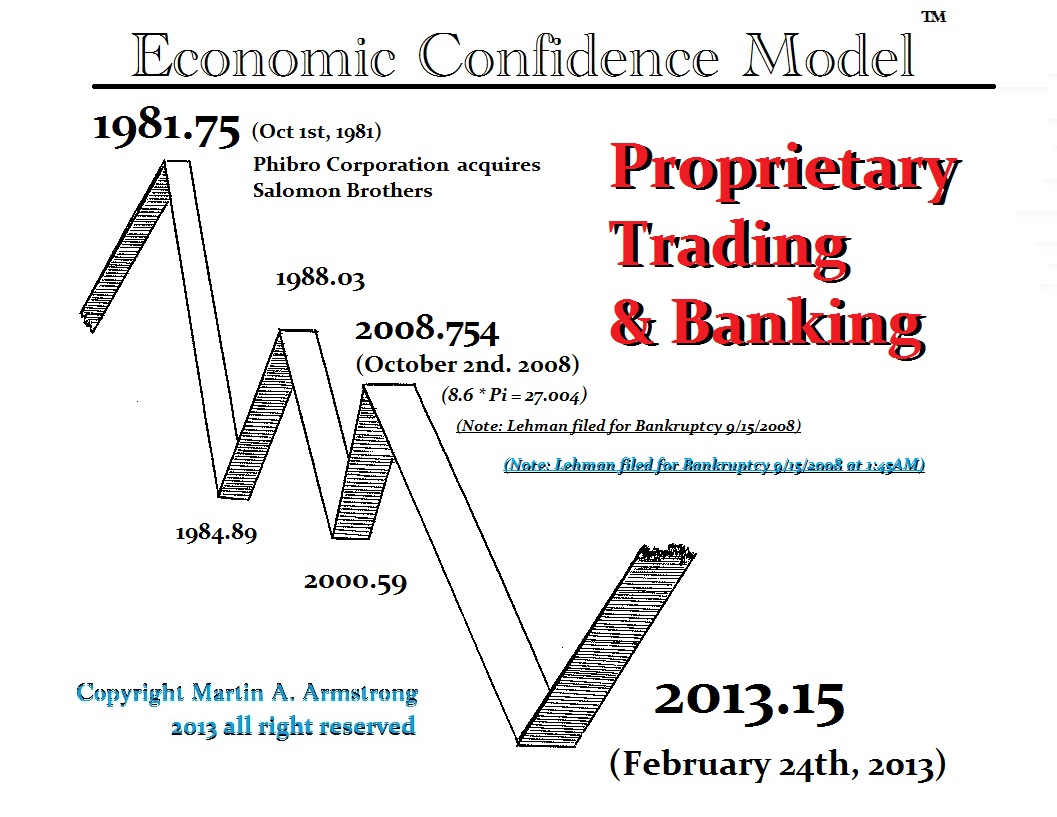 The cycle has changed. The wheel of fortune has completed its revolution. Governments are turning against the banks and looking to electronic currency. The days of rumored banking conspiracies are coming to an end, as it always does. The banks will be a giant short. When the Sovereign Debt defaults become a contagion, the banks will not be supported by government.

« Religious Freedom & War
Why Money Need Not Be “Tangible” »