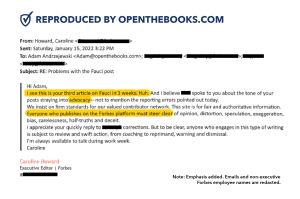 Adam Andrzejewski reported that Dr. Anthony Fauci became America’s highest-paid public employee amid the pandemic, and that report cost him his job at Forbes. The war on journalism is on. Everything Andrzejewski reported is public record — Fauci earned $1.7 million in 2020, and his wife Christine, who also works at NIH, earned $234,284 in 2020. The Fauci’s household net worth now exceeds $10.4 million.

Forbes was not happy with Andrzejewski’s reporting, and the situation reached a peak in January 2022 when US Senator Roger Marshall (R-Kan) cited the Forbes article while questioning Fauci’s financial disclosures. Fauci pulled a Biden and called the senator a “moron” on a hot mic. OpenTheBooks sued NIH in October 2021 for failing to provide the 1,200-page report of Fauci’s hidden financials. Rather than questioning the money flowing to Fauci, Forbes blamed their own journalist for exposing the skeletons in the closet.

Caroline Howard, the executive editor at Forbes, reached out to Andrzejewski to question why he wrote three articles on Fauci in three weeks. Howard accused Andrzejewski of reporting his personal “opinion” rather than fact, despite him citing his sources and maintaining journalistic integrity. Only six of his 56 published articles from 2021 to 2022 mentioned Fauci, but that was still too much for Forbes. 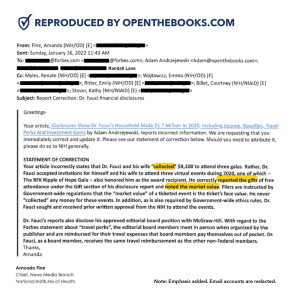 The National Institute of Health should have no say on public reporting and their eagerness to censor the truth should raise suspicions. The NIH reached out to Forbes demanding that they change the terminology surrounding Fauci’s gala attendances to “received” rather than “collected,” along with other minor changes, but they found nothing wrong with Andrzejewski’s overall report. Forbes fired Andrzejewski two days later.

All news agencies have been compromised. All news is now government-sponsored and/or edited. The truth is not easily available, but it is out there if one cares enough to seek it out.