Capital Controls in Europe Have Arrived 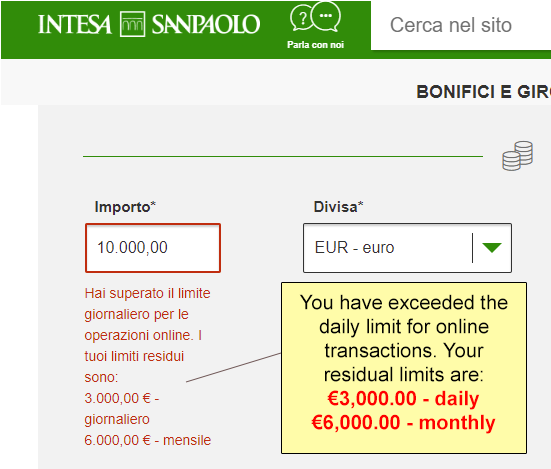 I was trying to wire money from my bank account in Italy to the one in the UK, just to realise that I can no longer transfer more than 6,000EUR per month.

The Soviet EUSSR is in full capital controls mode. I am missing the beauty of Italy every day, but I am so glad to live in Brexit UK.  Good luck to the old continent.

REPLY: I warned that all my sources were confirming, three very high up, that Europe would quietly impose capital controls on June 30, 2020. That has now taken shape. Europeans and not allowed to send more than 6,000 euros per month to another account outside the EU. Capital has been pouring out of Europe, and they beat not just the war drums but also the Green drums that forewarn of a severe economic decline for Europe.

Even in the United States, we have capital controls in place for a different reason — taxation. You will find it limited to try to wire more than $3,000 to an individual outside the United States. As I reported before, a friend in Singapore found me a service apartment and put down the first month’s rent for me. I sent him a wire, but when I got there, he said he never got it. I called my bank to put a trace on it, and HSBC returned it, saying they would not credit it to that account because they could not verify it was not secretly for me. I had to write him a check. You can wire to a business without a problem, but not to an individual. The hunt for taxes lives.

People have argued with me that I am wrong and it is capitalism that is collapsing. Sorry – socialism has brought us to the very sad end. Politicians can only run bribing voters, saying they will rob the rich to hand it to them. They can no longer borrow endlessly with no intention of paying anything back. That said, they know they will have to default. The question has been HOW?
This is what Schwab’s entire WEF is about. His Great Reset is because socialism is collapsing. I did our Solution Conference in 2015 because I knew what he was advising to world governments. The problem was that his way is that they become dictators, and he is even ending your right to vote. While they call Putin authoritarian, the head of the EU also does not stand for election. They are appointed by EU member politicians. This is what they want — ZERO right of the people to vote. They intend to control what we buy, where we live, and what we are allowed to say. So you can see, in my Solution, we retained democracy, so they were not handed ultimate power. Capital controls are part of this plot to end our freedom.
Categories: Tyranny
Tags: 2015 Solution Conference, capital controls, EU, Great Reset, Hunt for Taxes, WEF