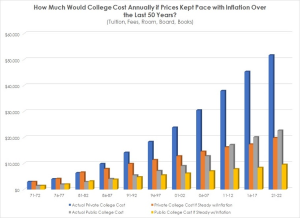 I have stated countless times before that an apprenticeship or on-the-job experience is superior to formal education. The curriculum is shaped by left-leaning professors who are funded by left-leaning organizations. Even a North Korean defector reported feeling that students were “choosing to be brainwashed,” and felt that the curriculum at Columbia University stifled critical thinking.

Not to mention, once you pile on the student loan debt, good luck getting out. Thanks to the Clintons repealing Glass-Steagall, student debt is non-dischargeable even in the case of bankruptcy. The costs for college continue to rise. According to a non-profit group called the College Board, college tuition would cost between $10,000 and $20,000 annually if it rose at the same rate as inflation. Instead, the cost for public tuition is now between $22,690 for in-state students to $39,510 for out-of-state students, while private schools cost around $51,690. This means that the average cost of college has increased by 2700% in the past 50 years!

Joe Biden vowed to erase some college tuition debt as a campaign promise designed to attract young voters. Unfortunately, he had no financial plan to do such a thing, and most who are educated and well-read (there is a difference), knew it was an empty promise. Companies are increasingly not requiring college degrees for new hires, but the stigma attached to not having a college degree remains prominent. The idea that we must receive formal education to be labeled as educated individuals is an antiquated concept that is causing thousands of Americans to plummet into a life of debt from which there is no escape. Prior generations could afford to go to school, buy a home, and begin families. The entire concept of the American dream has been altered due to the US university cash-grab.