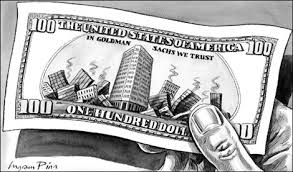 Goldman Sacks agreed to pay Malaysia $3.9 billion in league with the Department of Justice (who always protects Goldman) in return for Malaysia dropping all CRIMINAL charges against Goldman Sachs concerning the 1MDB fraud. I have reported before that when that deal was coming down, no other firm was allowed to quote the project. The entire thing was orchestrated in an illegal fashion and other dealers were prohibited from even quoting.

There will NEVER be a clean up of Wall Street, for the bankers OWN the Justice Department in New York City, the courts, as well as the SEC & CFTC regulators. I maintain that you should never deal with any New York bank, for you will NEVER prevail in any confrontation. They own the entire system.

This settlement is simply because Malaysia was filing criminal charges against Goldman Sachs in its own country. This deal reflects how they own the Department of Justice, for Goldman is only paying a cash settlement of $US2.5 billion while another $US1.4 billion will come from seized 1MDB assets being returned with the help of the US Justice Department.

Trump is oblivious to the real swamp in New York, which funds everything in Washington. They bought the Clintons to make student loans nom-dischargeable in bankruptcy so we have a whole generation with worthless degrees and so much debt that they cannot buy a home. Goldman Sachs not just donated to Hillary exclusively during the 2016 election, but they went as far as prohibiting staff from donating to Trump. Then Trump blindly hires people from Goldman Sachs? Very wrong decision!