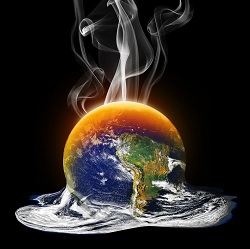 ANSWER: No. What is happening is clearly climate change. The big question remains are we talking about a pole shift or simply a collapse in the cycles to a minimum? Areas that are traditionally cold are getting warm and vice versa. I was in Germany in Bavaria and it was hot. In fact, that area typically does not get hot so the buildings, including hotels, do not even have air conditioning. Off in Ukraine, which is notorious for a hot summer in Kiev, was dramatically cooler. Even here in the USA, the north was bitterly hot and here in the Tampa area in Florida, we NEVER had a single day that reached 100F (37.7778c). I also previously reported how girls were wearing bikinis in Siberia for the first time.

The weather patterns are flipping. This idea that there is Global Warming for the entire planet as a whole is just nonsense. It is preventing real research into what is going on and are we in the early stages of a pole shift, which is overdue. The problem is that such events take place every 720,000 years or so (see Maya Report).  Consequently, nobody knows for sure. There is concern that what we are facing is a pole shift given what is normally warm is cold and vice versa. Those in geology know the cycles of the Earth. They are at odds with those claiming Global Warming is being caused by women driving the kids to soccer practice.

The forecasts were that New York City would be under water by 2000. Then they moved the target to 2020. Now the IPPC moved it again to 2050. The forecasts about nuclear war have also been proven incorrect. The research is really the worst I have ever seen.

The relevance of all this to markets is the backdrop to the commodity cycle.