Julian II – The Trump of Rome? 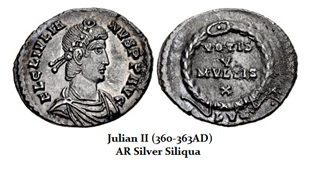 QUESTION: Mr. Armstrong; You seem to have studied history more than any professor I ever met. So I am directing this question to you. Did Rome have their Trump who tried to drain the swamp? Or was everyone just immersed in the swamp?

ANSWER: History repeats because human nature never changes no matter how much we progress technologically. So many people think history is irrelevant and you will often hear that this time it’s different. I have found no exceptions whatsoever and I have really searched very hard by studying the rise and fall of empires, nations, and city-states.

Flavius Claudius Julianus, known to history as Julian II, was born in Constantinople around 332 AD, the son of Julius Constantius who was the half-brother of Constantine the Great. His father was born by his grandfather’s second wife, Theodora. When Constantine the Great died in 337 AD, his son, Constantine II launched a midnight Palace Massacre whereby all persons who might be his rival for the throne and were not the direct descendant of Constantine I’s first wife were slaughtered. Fortunately for Julian, he managed to escape the Palace Massacre only due to his extremely young age. Julian was restored to the imperial favor as he grew and was given the rank of Caesar (Vice President) on November 6th, 355 AD, about the same time he married Constantius’ youngest sister, Helena. 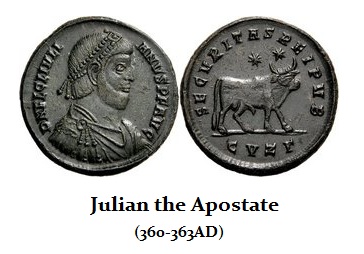 Yet the Palace Massacre left a deep mark upon his character whereby he saw Christianity as just another cult and the preachings of thou shalt not kill  meant really nothing when power was at stake. As a result, he was dubbed by theologians as Julian the Apostate. Julian’s coinage changed when he became Emperor. He grew a beard which was taken as a sign of being a pagan whereas Christians were clean-shaven. His coins would often display pagan motifs as well. Julian began his reign by throwing off his Christian cloak and declaring that all religions would be tolerated. He gave especially large donations to the pagan causes. He dismissed his Christian teachers and ended state subsidies for the church. He then took an active role in organizing pagan worship throughout all the provinces.

Julian’s own philosophical beliefs led him to idealize the reigns of Hadrian (117-138 AD) and Marcus Aurelius (161-180 AD). He described the ideal ruler as being essentially primus inter pares (“first among equals”), and thus not above the same laws that applied to everyone else. Julian frequently attended the Senate, participating in debates and making speeches. He was opposed to the traditional royal court operations that were used by his predecessors as inefficient, corrupt, and highly expensive. He cut the bureaucratic waste dismissing thousands of servants, eunuchs, and duplicated officials drastically reducing the cost of government for the taxpayers. He went as far as to prosecute corruption in government establishing the Chalcedon tribunal under the supervision of a magister militum Arbitio. He prosecuted former official under Constantius including the chamberlain Eusebius who ran the royal court finding them guilty and this sentenced to death. Yet Julian did not attend these proceedings that some argued meant he did not approve of these actions yet he took no steps to prevent them.

Julian also adopted the philosophy of Thomas Jefferson whereby he tried to reduce the federal bureaucracy expanding state and local authority at the expense of the imperial bureaucracy as Julian sought to reduce direct imperial involvement in urban affairs. For example, he went as far as to return city land owned by the imperial government and city council members were then compelled to resume civic authority.

There was really a massive invasion of people from the north as the climate began to turn colder. It was more than just barbarians seeking plunder. They were migrating due to climate change. In 357AD Julian, had defeated the barbarians known as the Alamanni giving him the prestige and political power to be respected. He stepped in and prevented a tax increase by the Gallic (France) praetorian prefect Florentius and personally took charge of the province of Belgica Secunda. Julian now cross from military to civil administration, where he demonstrated his philosopher training being influenced by his liberal education in Greece.

Julian’s first priority, still as Caesar and not Augustus (Emperor), was to drive out the barbarians who had breached the Rhine frontier. Thereafter, he won the support of the civil population by his fairness. He set out to rebuild the region creating a stable and peaceful economy following the barbarian invasions. Julian clashed with Florentius over the latter’s support of tax increases and the prevailing corruption within the bureaucracy.

Julian’s handling of tax reform was brilliant. As far as taxes upon the cities, Julian actually reasonably made the tribute in gold by the cities called the aurum coronarium astonishingly voluntary rather than a compulsory tax. Like Hadrian, who rectified tax situations and is said to have defended the weak against the strong, Julian followed his role model. Any arrears concerning land taxes were simply canceled. This was an essential reform reducing the power of corrupt imperial officials, as the unpaid taxes on land were often hard to calculate or higher than the value of the land itself. Forgiving back taxes both made Julian more popular and allowed him to increase collections of current taxes.

Clearly, Julian ceded much of the authority of the imperial government to the cities decentralizing the government in what we would call state-rights today. His actions, no doubt, provided the backdrop to Thomas Jefferson who studied everything he could about the Roman Empire and perhaps accounted for his anti-Federalist position.

Julian also took more direct control of the affairs of state to eliminate corruption himself. For example, new taxes and corvées had to be approved by him directly rather than left to the judgment of some bureaucrat. Julian was well aware of the need for society to be properly managed politically, but he also saw the religious side that had led to the horrendous and violent dislocation of religion during the 3rd century.

Julian purged the bureaucrats draining the swamp that were career appointees of previous administrations and instead drew heavily from the intellectual and professional classes with knowledge and experience – very novel in those days. His choice of consuls for the year 362 AD was highly controversial since he surprisingly chooses Nevitta, who had been Julian’s trusted Frankish general. Some argued that this appointment was showing his reliance upon the power of the army while others claim he was seeking the maintenance the support of the Western army that made him emperor.

Julian was convinced that an all-out war would become necessary against the Persians who had for centuries constantly caused the eastern provinces great trouble. In March of 363, Julian departed for his invasion of Persia taking 65,000 infantry and Calvary. After some minor success, he reached Ctesiphon, the capital of Persia, in June, but his food supply was running low. Realizing that he could not take the city, Julian ordered a retreat down the Tigris. Julian was injured by a spear. There was speculation that he was killed by a member of his own troops because of his religious beliefs. But this was only speculation.

We have less than 100 silver Siliqua that are from a very famous hoard discovered in Britain. This is known as the Harptree Hoard discovered in 1887. This hoard was discovered in the village of East Harptree, located approximately 16 miles southwest of Bath. The hoard consisted of 1496 silver coins, five silver ingots, and a Roman silver ring set with a carnelian intaglio stone. The coins are 4th century, covering the period of Constantine the Great to Gratian (circa 306 to 383 AD).

The landowner, Mr. William Kettlewell, made the hoard available to the British Museum under the law, and it was first written up by John Evans in The Numismatic Chronicle of 1888 (pp. 22-46). The British Museum kept 25 of the most interesting coins from the hoard, and the rest of hoard was returned to the owner. We have purchased a portion of that hoard and are offering here the coins of Julian II (360-363 AD). Again, the quality of these coins is exceptional and grade Very Fine or better.