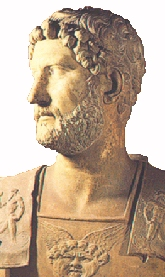 Publius Aelius Hadrianus, was born in Rome on January 24th, 76 AD although his family had settled in Italica (Spain) nearly 300 years prior when that region was first opened to Roman colonists. In 86 AD, Hadrian lost his father at the age of ten – Aelius Hadrianus Afer who was a cousin of Trajan. Hadrian, along with his sister Paulina, were placed under the care two guardians, Acilius Attianus and the future Emperor Trajan.

At the age of 15, Hadrian was pushed into a military career rather reluctantly. While he tended to prefer a life of extravagance and hunting, Trajan recalled him to Rome and appointed him judge in one of the inheritance courts. Soon thereafter, Trajan sent him off as an officer in the Second Legion and he was later being posted on the Danube while serving in the Fifth Legion.

Following the death of Nerva in 98 AD and Trajan’s rise to the throne, Hadrian became a close friend of Trajan the Emperor yet perhaps not close enough. Hadrian was the favorite of Trajan’s wife, the Empress Plotina. In 100 AD, Plotina proposed a marriage between Hadrian and Vibia Sabina, Trajan’s grand-niece by his sister Marciana. Although Trajan was opposed to this union, Plotina somehow won.

Hadrian’s career began with the help of the Empress Plotina. Eventually, Hadrian commanded the First Legion during Trajan’s Second Dacian War between 105 and 106 AD. His career finally began to bloom becoming Praetor in 106 AD, Governor of Pannonia in 107 AD and then Consul in 108 AD. In 114 AD, Hadrian was given the Governorship of Syria, which was an important position at the time since Trajan was marching into war against the Parthians.

There was no clear sign that Trajan had intended Hadrian to be his heir and indeed there remained some serious doubts among contemporary writers of the day. Some even went as far as to accuse Plotina of forging documents after Trajan’s death which showed that he had adopted Hadrian shortly before his death. Whatever the case, apparently some coinage was struck showing Hadrian taking the title of Caesar making him perhaps the first to use that title to designate the status of heir. 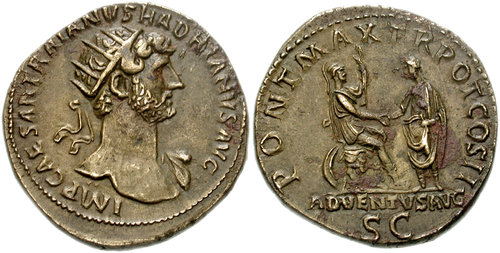 Hadrian’s arrival in Rome was on day (July, 9) in 118 AD. Hadrian entered the city of Rome eleven months after his succession to Trajan. His reign began with what became known as the “affair of the four consulars” This was an incident when four ex-consul Senators were murdered on the charge that they were plotting the overthrow of Hadrian. It is not clear exactly what happened but according to Historia Augusta, Hadrian’s autobiography (now lost) placed the blame on the Senate for ordering their executions without his approval. Hadrian even swore a public oath that he had nothing to do with the incident. 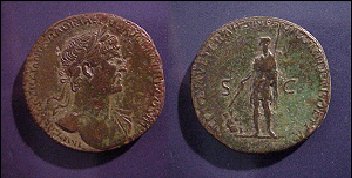 As a consequence perhaps of this incident and the rumors that Trajan had not named Hadrian as his heit, Hadrian focused on measures to increase his popularity with the plebs by cancelling the public debt worth 900 million sestertii. The records of these debts were publicly burned in the Forum Trajanum illustrated on this sesterius This was an event which gained him public favor (see the burning of the tax debts tablet on the Plutei of Trajan and on this sestertius of Hadrian).

Hadrian tax-amnesty anaglyphia Traiani of 118AD followed the similar tax-amesty of Octavian (Augustus 27BC-14AD) who also burned records of all debts before the battle of Actium wiping out debts prior to the civil war. Hadrian’s tax-amnesty benefited not just individuals with tax-debts, but also tax-farmers and public contractors, potentially a broad spectrum of equestrain and senatorial orders. Anyone who was a tax-farmer or a contractor made guarantees on tablets forfeiting money is they failed to meet the guarantee. The civil war had seriously impacted the flow of taxes and hence these taxes were still owed to the state. A tax-farmer guaranteed the taxes for a region and it was their responsibility to collect the taxes. Any excess was their profit. With the civil war, tax collection came to a halt.

Traditionally, the state censors published a list deadbeats who owed the state taxes at the treasury (aerarium). Hadrian’s tax-amnesty was about 900 million sesterii. Historia Augusta recalls:

“Moreover, he [Hadrian] used every means of gaining popularity. He remitted to private debtors in Rome and in Italy immense sums of money owed to the privy-purse, and in the provinces he remitted large amounts of arrears; and he ordered the promissory notes to be burned in the Forum of the Deified Trajan, in order that the general sense of security might thereby be increased. He gave orders that the property of condemned persons should not accrue to the privy-purse, and in each case deposited the whole amount in the public treasury. He made additional appropriations for the children to whom Trajan had allotted grants of money.”

Hadrian abandoned Trajan’s eastern conquests and his plans to expand the Empire beyond the Euphrates River. Instead, Hadrian chose to revert back to Augustus’ policy of consolidation of the frontiers already in Rome’s possession, which meant holding the natural borders of the Danube in the north and the Euphrates in the east.

Hadrian’s major reform program appears to be directed at the fact there had been rumors that Trajan’s wife made him Emperor not Trajan. Therefore, Hadrian also revised the administration of justice and finance, and developed a permanent civil service.  We also find coinage informing the people of the “restoration of Liberty” showing a woman with two children standing before Hadrian. This is most likely a reference to the freedom to make a will without the interference of the Emperor. However, it could also refer to Hadrian’s decision that the children of a Roman citizen by a slave mother should be regarded as a free citizens. 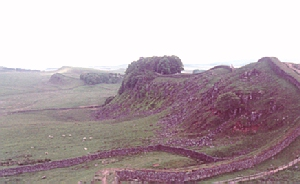 119 AD was a year during which the coinage also celebrated the restoration of order in Britain. It is most likely at this moment in time when Hadrian first decided on the construction of one of his most famous building projects – Hadrian’s Wall in Britain. The great wall which crosses England between the Tyne and the Solway Rivers, covers a distance of about 75 miles. Much of this immense work (18′ high x 6′ to 10′ thick) still exists today.

Between 121 and 133 AD, Hadrian spent much of his time visiting the provinces of his vast Empire. He issued a series of coinage showing most of the provinces of the Empire as he traveled. Hadrian also spent much of his time improving the defenses of the frontiers, laying the foundation for many new towns, and building a vast new road system and, of course, aqueducts to supply his new creations. 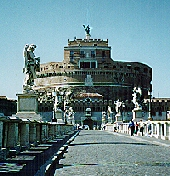 Among Hadrian’s other building projects are his magnificent villa at Tivoli covering 160 acres (65 hectares) as well as his mausoleum, which was later converted into the Castle of Saint Angelo. There is little doubt that Hadrian was one of the empire’s most capable Emperors, who devoted his whole life to the improvement of the state. A magnificent Arch was constructed showing various unting scenes. However, much of the sculpture from this arch was used by Constantine I in the construction of his own arch in Rome. A Triumphal Arch of Hadrian had also been erected. However, all that remains today are several relief panels.

There is little doubt that Hadrian engaged in homosexual behaviour. Historia Augusta criticizes him for not only his love of men but also his adulteries with married woman. There is also little doubt that he was not especially close with his wife Sabina and rumors claimed that Hadrian even attempted to poison her. But of all the evidence that exists, perhaps the best is that of his love affair with Antinous who was a man of great beauty. Antinous was Hadrian’s companion and he accompanied him on a trip to Egypt in 130 AD. Hadrian reported in his autobiography that Antinous fell from his boat into the Nile and drowned. Hadrian was so grief stricken, that not only were numerous sculptures and several coinage issues commissioned, but he also founded a city in Egypt on the spot where he died – Antinoopolis.

The master builder of Rome, Hadrian ran into serious trouble when he attempted to rebuild Jerusalem in 132 AD. The city had remained largely destroyed following the first revolt of 66-74 AD which was concluded by Vespasian and Titus. Hadrian had grand plans to build a new Graeco-Roman city in Jerusalem to be named Aelia Capitolina. A Temple to Jupiter was to be raised on the old site of the Great Temple of Solomon.

Hadrian’s grand plans for Jerusalem led to what would be his only war – the Second Jewish Revolt between 132-135 AD. The revolt was led by Simon Bar-Kochba. Hadrian initially dispatched the the Governor of Britain to deal with the rebellion and finally he himself had to travel to Judaea. Finally, peace was restored in 135 AD only after 500,000 rebels had been killed.

In 136 AD, Hadrian found himself at the age of 60 with his health starting to fail. Lacking a son, Hadrian turned to Lucius Ceionius Commodus and adopted him late during the year of 136 AD. His name was changed to Lucius Aelius Caesar and in 137 AD a series of portrait coinage of Aelius was issued along with a large donative (300 million sesterii) to the legions in hopes of securing their support. Unfortunately, Aelius died suddenly of tuberculosis in 138 AD. Hadrian then turned to Antoninius Piusand adopted him as his heir on February 25th, 138 AD. However, Antoninus was 51 years old and an honorable Senator who was clearly not ambitious and by choosing him, Hadrian may have been securing the throne for his 16 year old nephew who ultimately succeeded Antoninius – the future Emperor Marcus Aurelius.

Hadrian suffered greatly from an illness described as dropsy. He reportedly attempted suicide several times but his servants refused to aid him. He finally turned the affairs of government over to Antoninus Pius and departed Rome for the resort at Baiae where he died on July 10th, 138 AD.

The precise date of renewal for Hadrian’s tribunician power is not known, but it was most likely some time during August.

Hadrian was the first Roman Emperor to have himself portrayed with a beard. This is most likely due to his great love of Greek Art and culture. 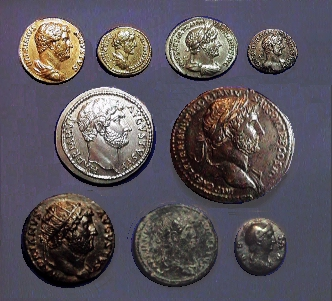 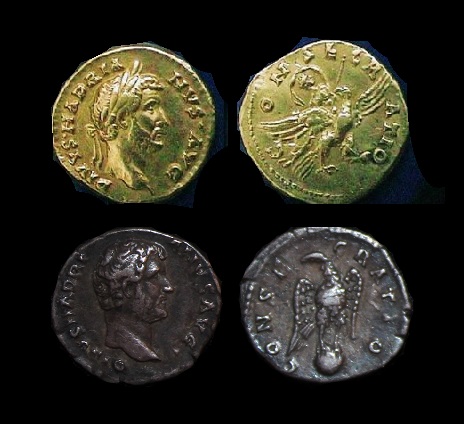