Has the FBI become the Praetorian Guard? 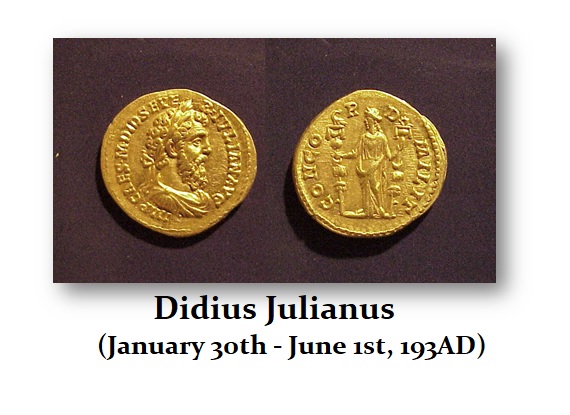 COMMENT: Hey Marty, if it’s true that the FBI formed a “Secret Society” to eliminate Trump in the 2016 elections isn’t this similar to the Praetorian Guard picking Emperor?  The Elite Police/Military choose our leader.  So in other words, the USA’s downward spiral has been sent in decided motion and we have begun our descent.  I can’t believe people aren’t outraged.

REPLY: The next step is to auction off the office of president to the highest bidder whoever promises the bureaucrats the most money for their pensions.

This reminds me of Marcus Didius Julianus who was a distinguished Senator of Rome. Emperor Commodus was assassinated and Pertinax became emperor and he, like Trump, was not liked by the bureaucrats so he was murdered by the Praetorian guards. After parading around with the head of Pertinax on a pole, the Praetorian Guards withdrew to the safety of their camp. There was no clear heir to the throne so the Guards stationed heralds on the wall to announce openly that the office of Emperor was up for sale to the highest bidder.

This incident became the most scandalous affair in the history of political corruption. Can you imagine that the FBI auctions off secretly the office of the President? I am sure Lindsey Graham would be a major bidder.

There were two rival bidders who presented themselves – Titus Flavius Sulpicianus (father-in-law of Pertinax) and Marcus Didius Julianus. Didius’ bid was 25,000 sestertii per man, which was the high bid and he was duly declared Emperor.

Didius Julianus quickly found himself in serious trouble. The treasury had been depleted much more so than he had expected under Commodus. Didius began to reduce the weight of the coinage trying to stretch the reserves as far as possible. At the same time, he attempted to politically demonstrate stability by also issuing coins bearing the portraits of his wife Manlia Scantilla and daughter Didia Clara.

Julianus found himself deserted by the Praetorians and deposed by the Senate. He sought refuge in his deserted palace but was beheaded on June 2nd after a reign of only 66 days.

If Mueller and his FBI conspirators, cheer by Lindsy Graham,  take down Trump, they better beware. There may be a bigger rebellion against them than they ever imagined if history has anything to say.