It turns out that not only do they engage in FAKE NEWS, but they employ the internet in every possible way to falsely deprive the people of the truth. Wikipedia is such a joke that students are not allowed to use it as a source in school. They protect whoever writes their entries with anonymity. Now what has surfaced is that the pretend independent fact-checker website FactCheck.org is one major fraud. If this had anything to do with stocks, the SEC would storm their gates, and everyone involved would go to prison for 20 years.

Anyone who has had a family member harmed by a vaccine should ban together and file a class-action lawsuit, for these people are NOT immune. This FactCheck.org is funded by the same $1.9 billion vaccine lobby group that it is supposedly independently checking. This is a MAJOR FRAUD, and on top of that, this site is a Facebook partner whose articles are used to censor critical voices on the social media platform. They are instrumental in having people canceled on Facebook.

In any other regulated field, FactCheck.org is a criminal organization deliberately pushing vaccines and is instrumental in shutting down any opposition. This criminal organization under TRICO statutes is headed by a former CDC director, which is once again a conflict of interest. He is being paid by the drug lobby indirectly. Facebook partnered COVID fact-checker is an outrageous fraud. FactCheck.org was funded by the same $1.9 billion vaccine lobby. A US congressman Thomas Massie has pointed out a fact that a COVID-19 vaccination “fact-checking” project conducted by a Facebook-partnered website was actually funded by a group that holds $1.9 billion in Johnson & Johnson stock. 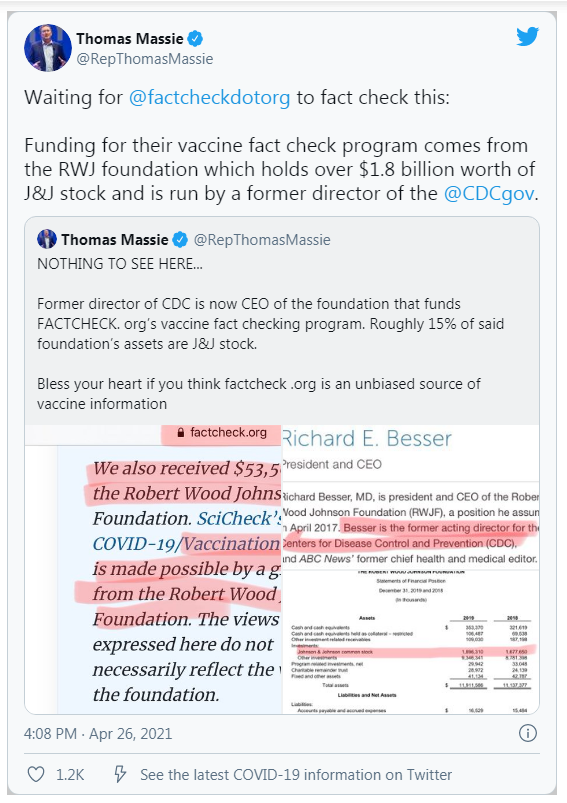 The degree of corruption here is unbelievable. There is NOBODY defending the people. Companies like Facebook have crossed the line and now put people’s lives at risk — for what? Money or power?

The Racketeer Influenced and Corrupt Organizations Act (RICO) is a federal law designed to combat organized crime in the United States. It allows prosecution and civil penalties for racketeering activity performed as part of an ongoing criminal enterprise. Such activity may include illegal gambling, bribery, kidnapping, murder, money laundering, counterfeiting, embezzlement, drug trafficking, slavery, and a host of other questionable business practices that FactCheck.ORG falls under.

To convict a defendant under RICO, the government must prove that the defendant engaged in two or more instances of racketeering activity and that the defendant directly invested in, maintained an interest in, or participated in a criminal enterprise affecting interstate or foreign commerce. The law has been used to prosecute members of the mafia, the Hells Angels motorcycle gang, and Operation Rescue, an anti-abortion group, among many others.