USA: Where Politicians Are Free to Rig the Game As to be expected, the Republicans are up to dirty tricks to try to prevent Trump from being the candidate. After the Iowa Caucus, reports are surfacing from volunteers who say that their precincts were being combined into one large mob to push the vote to Cruz. Iowa was always a rigged game, and generally only 1 in 6 people eligible to vote bother to show up. The political elite have typically tried to manipulate the election results, showing that Joseph Stalin was not so off base by saying voters never decide elections. 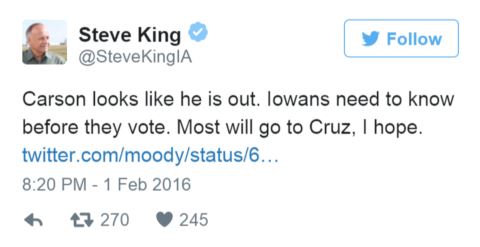 Reports are coming in stating that combining precincts neutralized the “caucus” process entirely. Rep. Steven King was in on it, tweeting that Carson was out of the race, which was not true. Ben Carson is outraged.

Trump has a long, hard, road ahead and they will do everything possible to rob the election from him in the primary. If they cannot rob the election from him, he will be assassinated. Unfortunately, they have far too much to lose to allow any outsider to enter their game. All career Republican politicians are endorsing Cruz and Democrats are endorsing Hillary. They are circling the wagons and ready to do whatever it takes to prevent anyone from the outside to enter Washington.