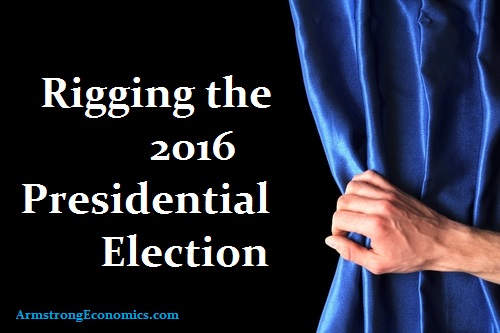 Clearly, the stage is set to blame Russia for a Trump victory. They are prepping the media who 99% endorse Hillary; the press conspiracy to feed propaganda to the American people is in full swing. Meanwhile, Obama continues to support the Sunni in the civil war with the intent to attack Russian forces in Syria. Our model still shows the largest turnout may take place here in 2016. This scares the blood, no matter how cold, right out of the veins of the career politicians. The American press is committing suicide and have succeeded in becoming indistinguishable from Pravda (“Truth”) of the old Soviet Union. Power corrupts everything, including the press.

There are two scenarios running around behind the curtain. I reported the one that Obama would declare martial law, suspend the constitution and remain in the presidency declining to allow Hillary or Trump to take the throne, he would step aside and hand it to Joe Biden. Some counsel that is too extreme. Others are proposing that Obama still blame Russia, but then throw it to the Congress by means of the electoral college and that way keep it under the pretense of being constitutional. Any way you cut it, this does not look like they will allow Trump to take the White House regardless of the vote. 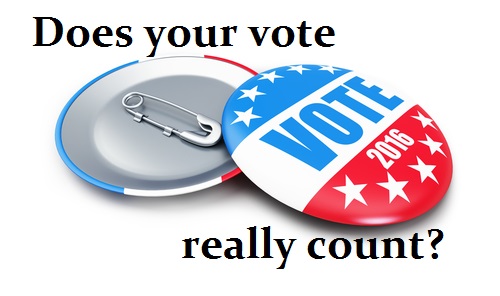 The United States Electoral College is the body that actually elects the President and Vice President of the United States every four years. The American people actually have no right to actually elect the president directly. Constitutionally, the states choose “electors”, who normally are pledged to vote for particular candidates. Hence, electors are apportioned to each of the 50 states in addition to the District of Columbia. The number of electors is determined by population and thus is equal to that state’s number of members of Congress. The Twenty-third Amendment granted the District of Columbia the same number of electors as the least populous state which equal three. Consequently, there are 538 electors which corresponds to the 435 Representatives and 100 Senators, plus the three additional electors from the District of Columbia. There are two exceptions where Maine and Nebraska do not vote on a “winner-take-all” basis. Maine and Nebraska use the “congressional district method” meaning there is one elector within each congressional district by popular vote.

Here comes the loophole. There is NO constitutional or federal law that compels an elector to honor any “pledge” and that is a hole big enough to fly a fleet of 747 planes through. Therefore, if they bullshit the people enough with the media supporting them, we will see the Electoral College hand it to Hillary regardless of how the people vote. This would be in line with our model which forecast 2015.75 was the peak in government and it’s all downhill from there. The candidate who wins the absolute majority of electoral votes, or 270 today, becomes president. The Twelfth Amendment provides for what happens if the Electoral College fails to elect a president or vice president, which could come into play here in 2016. Under this situation, then the House of Representatives will select the president. On four occasions, most recently in the 2000 presidential election between Bush and Gore. There, Gore won the popular vote with 48.4% and Bush had 47.9%. The Electoral College was 271 for Bush and 266 for Gore. Therefore, the Electoral College system has in fact resulted in the election of a candidate who did not receive the most popular votes in the election.

The election of a President who has not won in the popular vote also took place during the 1888 election. Grover Cleveland received 48.7% of the popular vote to Benjamin Harrison’s 47.9%. However, Harrison carried New York state and therefore outpolled Cleveland by 233 to 168 in the Electoral College. In the 1976 election, Carter carried 23 states with 297 electoral votes, while Ford won 27 states and 240 electoral votes. It has long been argued that the election of any President who received less than a popular vote plurality is really unfair and should be unconstitutional.

Only two Presidential elections (1800 and 1824) have been decided in the House. The election in 1876 after the civil war saw, South Carolina, Florida, and Louisiana submitted certificates of elections for both candidates. A bipartisan commission of Representatives, Senators, and Supreme Court Justices, reviewed the ballots. They awarded all three state’s electoral votes to Rutherford B. Hayes of Ohio, who won the presidency by a single electoral vote.

Our models are pointing to 2032 as the meltdown in the political system. This will be 52 years from 1980, with prior targets being 1928, 1876, 1824, and 1772. The current target of 2016 equates to 1964 and JFK’s assassination, 1912 and the defeat of the Progressive Party (Socialism), and 1860 with the Civil War. Each have been watershed events politically. It appears 2016 will live up to its target. Civil Unrest will rise significantly by rigging this year’s election.