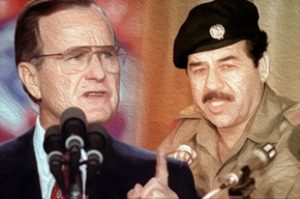 Iraq finalized its $52.4 billion reparation payment for its 1990 invasion of Kuwait, according to the United Nations. Under Saddam Hussein, 100,000 Iraqi troops occupied Kuwait in search of oil on August 2, 1990, leading to the first Gulf War. Iraq retreated from Kuwait in February 1991 after the United Nations Security Council placed embargos and sanctions on the nation. The United States under former President George H.W. Bush invaded to help liberate the people of Kuwait, and years later publicly executed Saddam Hussein after the Iraq War under former President George W. Bush.

There is outrage surrounding the payment as some feel the Iraqi people should not be punished for the actions of their previous dictator. However, that is not how reparations work. After Hitler committed suicide, Germany was still forced to pay reparations, albeit leading to economic ruin. However, under the London Agreement in 1953, Germany’s foreign creditors cut the nation’s payment in half.

The second Bush Administration pushed to forgive some of Iraq’s debt in order to stabilize the nation. In the end, whoever loses the war has to pay up and the victor can choose whether or not to forgive some of the debt. However, in the case of the Gulf War, this was not the US’ decision to make. UN Compensation Commission (UNCC) processed 2.7 million claims totaling $352.5 billion but approved the $52.4 billion payment for 1.5 million claims. The largest payment went to Kuwait Petroleum Corporation (KPC) for $14.7 billion to pay for the damage caused by burning oil wells.

“With the final payment of compensation made on 13 January 2022, all compensation awarded by the Commission has now been paid in full,” the UNCC declared. Iraq’s current GDP as of 2020 sits at $167.22 million, representing 0.15% of the global economy. Dictators can leave lasting damage on their nation’s citizens for decades, and this is no exception.