Forging a Vaccine Card is Now a Felony 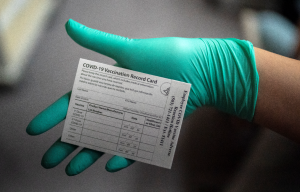 The US government has found a new way to turn regular citizens into criminals to fill overcrowded for-profit prisons. Forging a vaccination card is now a federal offense that could carry a lengthy prison sentence. The government is ready to pile on charges in addition to the original charge of falsifying the vaccine card. People are also facing charges for fraudulently using the seal of a US department, a crime that carries five years in prison. Manufacturing and distributing the cards could carry a sentence of 10 years.

In fact, a 53-year-old nurse from South Carolina, Tammy McDonald, was recently indicted for forging and replicating vaccination cards and lying to federal investigators. She now faces 15 years imprisonment for every card she produced, in addition to an extra five years for lying to investigators.

New York Gov. Kathy Hochul signed the Truth in Vaccination law that makes tampering with vaccine records a felony, carrying a sentence of one year. Therefore, unvaccinated newly deemed criminals will be subject to state and federal punishments.

Businesses could face lawsuits for failing to validate employees’ vaccine cards. There are hotlines in place for people to call to turn in anyone they suspect has possession of a fake card. I suppose lawyers are going to have a new niche to enter. Forbes reported on an Axios/Ipsos poll that discovered 6% of Americans knew someone who had a counterfeit vaccination card. The report found an equal number of Democrats, Republicans, and Independents hosting fake vaccination cards, showing that this is certainly not a political issue. Respondents aged 18-29, 30-49, and 50-64 were all equally as likely to know someone with a fake card. Resistance to vaccine mandates spans across political beliefs and age, but that is not reported in the mainstream media.