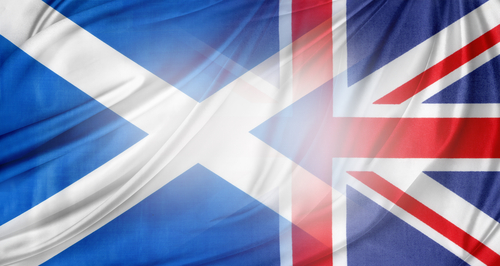 QUESTION: Marty,
Big fat question for you regarding the UK and the SNP.
You seemed to support Scotland breaking away from the UK in 2014, but since then you’ve voiced your concern on the socialist policies of the SNP. I share that concern, as do a growing number of people here, in not so sunny Scotland.

Unfortunately, SNP seems to have introduced a few more taxes into the system in the last year. One of which is that the higher tax band in the rest of the UK has been raised to 50K, whilst in Scotland, it has been kept at 43k. The other latest tax is that if the company you work for have parking spaces and you drive to work and park your car there, you can be hit with around £450 per year.

Looking back on the history of UK general elections, the SNP hit a high point in the October 1974 general election, polling almost a third of all votes in Scotland and returning 11 MPs to Westminster. They then dropped to under 6 seats till the 2015 election, where they went from 6 seats (in 2010) to 56 in 2015. You could argue the rise to 56 seats was due to the fact people either wanted independence or voted for them as they were happy to be led by them in Scotland but not wanting to be independent. They dropped to 35 seats in 2017, primarily due to people being fed up with the independence record being regurgitated over and over.

To summarise then, the large rise in ’74 followed by a big drop in its support at the 1979 General election, followed by a further drop at the 1983 election. Will we see this again? Big rise in 2015, followed by a large drop in 2017 and the same again in the next election?

Personally, I think the tax rises will take a big toll on their support and they will get hammered in the next election.

Many thanks for your thoughts and wisdom.

ANSWER: I love Scotland. Every time I flew in to Edinburgh to do an institutional conference for a day, I was introduced as a 7th generation Scotsman – never an American. The separatist movement is separate and distinct from the SNP, which is one step to the right of communism. I was living in London when “Braveheart” came out. I remember going to the movies there, and on the way out everyone was saying how some member of their family was Scottish.

That said, the SNP socialist policies are brain dead and this idea that they must remain part of the EU is beyond stupidity even for someone who is dead mentally. There is absolutely no economic validity to remaining inside the EU. The British have NEVER won anything of significance in the European court. What will it take to make the British realize that they are not really welcome in the EU for resentment remains that it was the Brits who saved Europe from both Napoleon and Hitler.

The Scots voted for independence in a referendum which was clearly rigged by London and the EU. But that was the prelude to BREXIT, which the government is doing its best muck up again over this unwarranted fear over trade. The economy will turn down very hard in Europe in 2019 into 2020 before bottoming. This will alter the politics ahead rather significantly. In Brussels, they will be blaming the Brits, while the Italians will begin to voice their opinion that the Brits got it right after all.

However, the true Scottish Separatist/Nationalism Movement actually began back in 1934 during the economic hard times of the Great Depression. It was in 1934 when the Scottish National Party (SNP) was founded, making its primary goal the future independence of Scotland. The party gradually began gaining ground after World War II, when the British pound crashed in 1949. It was further propelled again by the discovery of rich oil resources in the North Sea during the 1970s. Then in 1974, the SNP won 30% of the Scottish vote and 11 seats in Parliament after campaigning on the slogan “It’s Scotland’s oil!”

A referendum was held on September 11th, 1997 to ask the Scottish people whether they wanted a Scottish Parliament and whether it should have tax-varying powers. In that 1997 referendum, the Scots voted in favor of devolution of powers, which meant that although Scotland remained part of the United Kingdom, its government gained a broad range of new powers. It would have the power to set its own tax rates as well.

Among these new powers was also the right to control education and healthcare. This lead to the creation of a Scottish Parliament for the first time since it was dissolved in 1707. At the peak of the economy in 2007, the SNP won an upset victory in the Scottish parliamentary elections, ending some 50 years of Labour Party dominance. Then the SNP leader Alex Salmond became the first elected minister of Scotland. He won a second term in 2011 and was able to use his party’s historic mandate to secure approval for a referendum on independence for Scotland.

It took just two 8.6-year cycles from 1995 to the beginning of the separatist movement in 2012. In 2012, Salmond and British Prime Minister David Cameron signed an agreement to hold that referendum in 2014. Subsequent negotiations lowered the voting age in the referendum for 16 and determined that it will pose a single question: “Should Scotland be an independent country?”

The problem the SNP faces is they have mixed up independence, socialism, and remaining in the EU rather than the UK. In this regard, they have truly lost their way and do not comprehend either trade or the fact that socialism is collapsing right in front of their face.