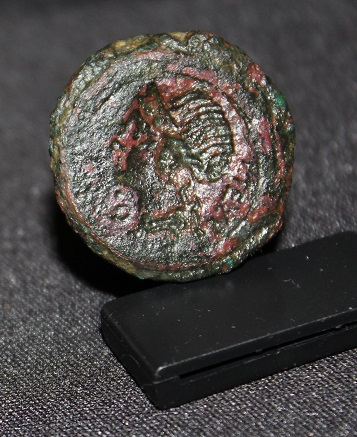 It might surprise many, nonetheless, governments have routinely spent more than they take in from taxes. In ancient times, governments simply minted more coins to fund their operations; they generally did not borrow. Some ancient Greek governments borrowed from the temples to fund wars and defaulted. However, typically, tax revenues amounted to only about 80% of expenditure. Records and dies from which coins were struck have survived. Pictured here is an actual Roman die from the Republic period. Each die was hand carved so we can distinguish between dies. Additionally, we know that the average number of coins produced before a die would break is about 15,000. Here is a coin struck from this issue that this die represents. Since we can catalogue the number of known dies, we then can reasonably estimate the annual production of money in the Roman Republic as well as the Imperial era. 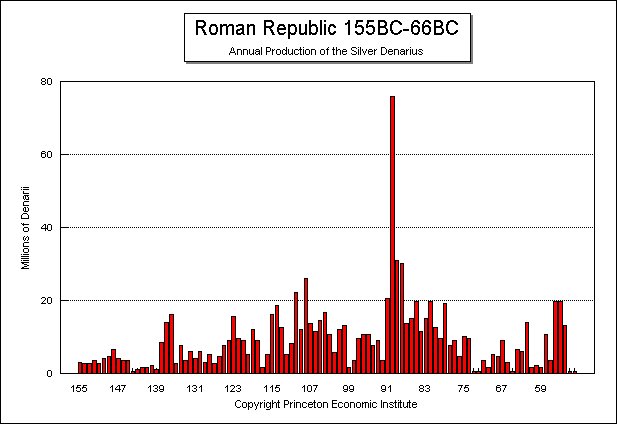 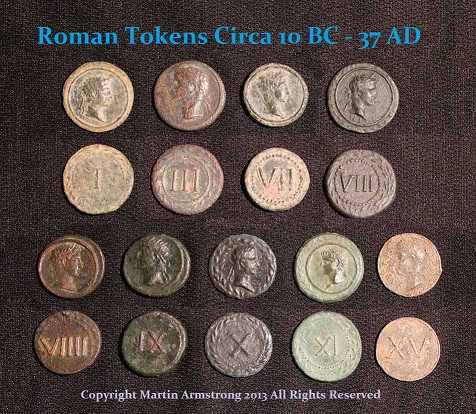 The above chart demonstrates the annual production of coinage during the Roman Republic (155-66 BC). We can differentiate periods of contraction (deflation) from inflation, and can see that some periods were clearly deflationary as a shortage of money occurred at times. The Roman Emperor Tiberius, who followed Augustus in 14 AD, was notoriously frugal. We find private coinage appearing as tokens to make up the difference for such periods of deflation.

The private token issues during the period of Tiberius (14-37 AD) are reminiscent of the Great Depression when hundreds of cities issued Depression scrip. We also find private token coinage produced during the American Civil War. They even issued postage currency whereby stamps were exchanged as money. 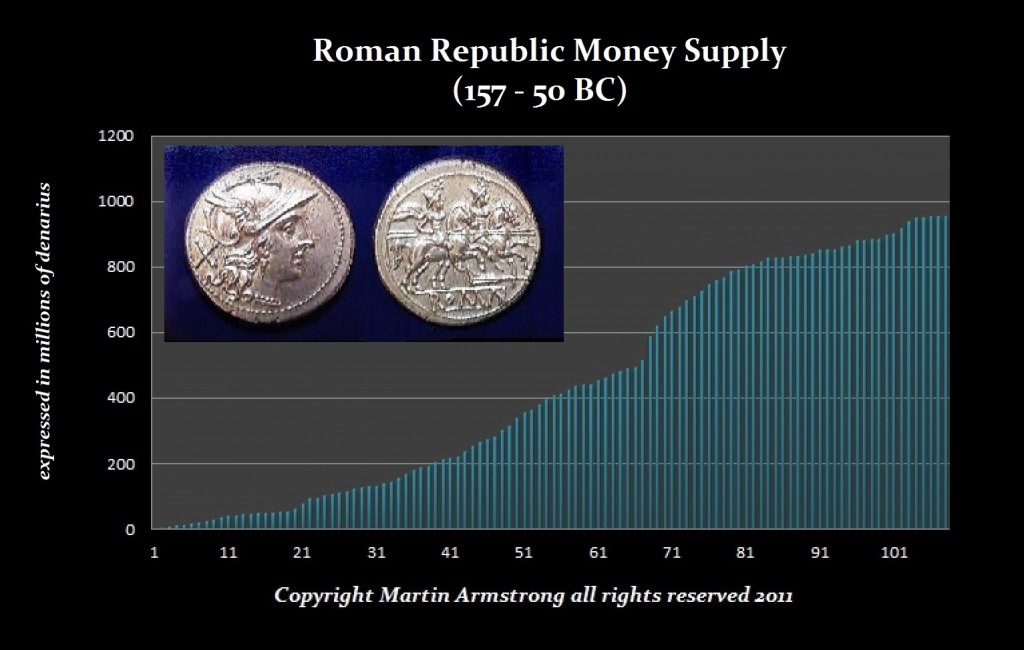 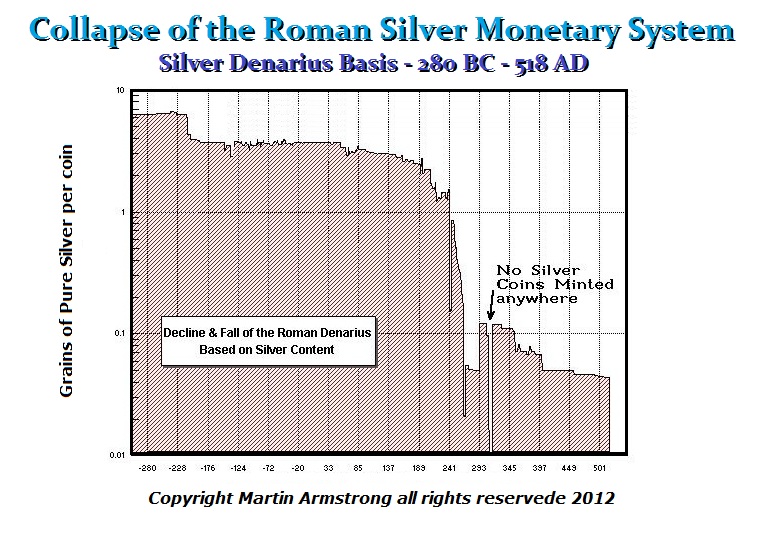 Since we can ascertain the annual production of coinage with a reasonable degree of accuracy, adding up those annual production figures will give us a look at the total money supply. We are then able to also reasonably ascertain that the Roman government collected only about 80% of its total expenditure from taxes. The rest was simply produced instead of borrowed.

Consequently, this provides the understanding as to why there would even be the practice of debasement. The fact that tax revenues fell short of expenses explains why about 20% of the annual budget was covered by new mining production. Rarely has there ever been a “balanced” budget based exclusively on tax revenue.

This further explains why coins of someone like Gordian I (238 AD), who reigned only 36 days, have survived and are currently worth around $3,000 instead of hundreds of thousands. 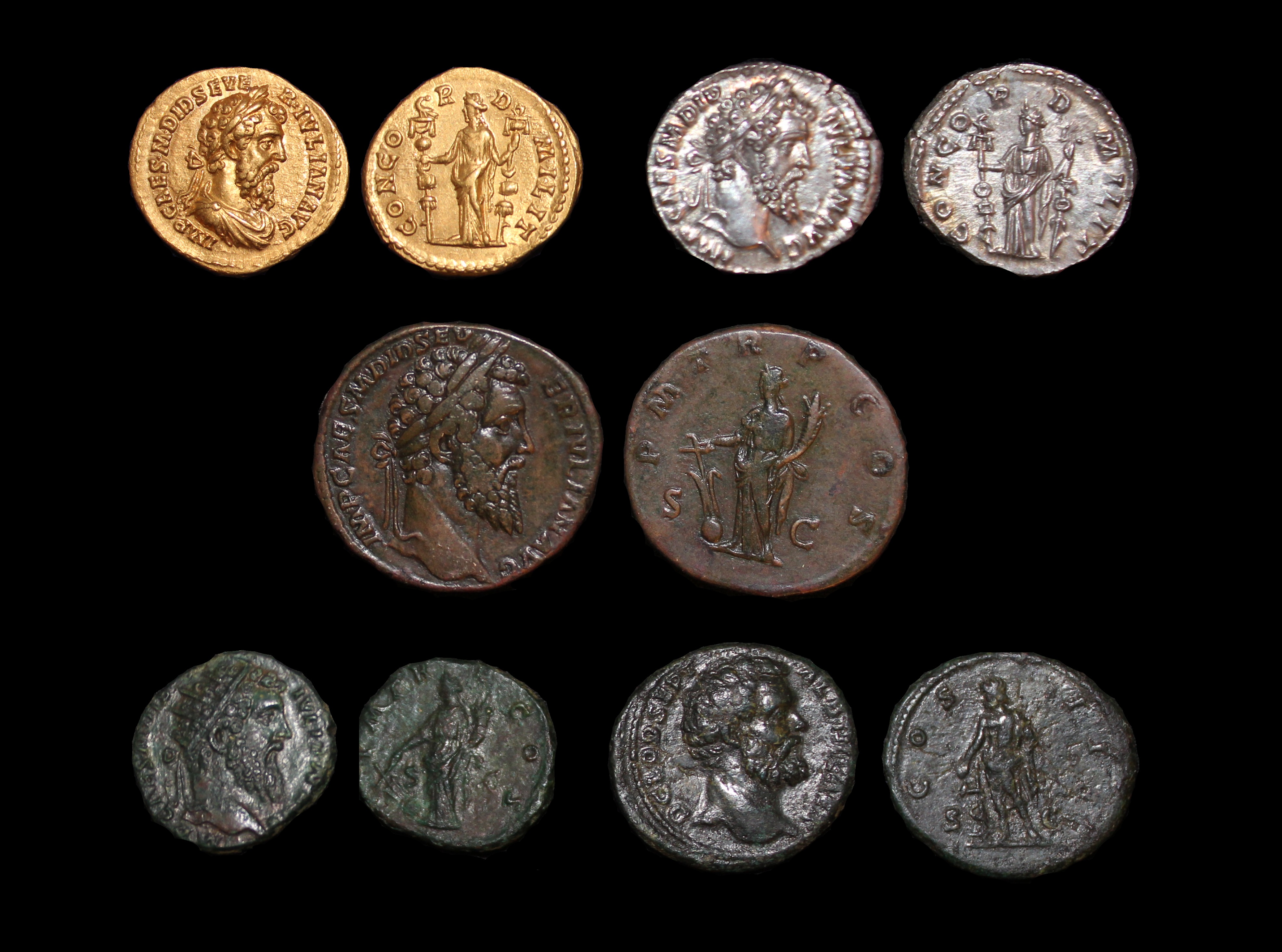 Then there is the coinage of Didius Julianus; his wife and daughter ruled for 66 days in 193 AD. The corruption had reached such levels that it was clear that the decline and fall of the Roman Empire began at this junction in time. The Praetorian Guard actually accepted bids for the position of emperor. There were two rival bidders who presented themselves – Titus Flavius Sulpicianus (father-in-law of Pertinax) and Marcus Didius Julianus. Didius’ bid was 25,000 sestertii per man, which was the highest bid, and he was duly declared emperor. This is why so much coinage has survived for someone who was in office just 66 days.

Today, to cover the shortfall, governments borrow each year with no intention of paying anything back. The Romans did not borrow; they increased the money supply to cover the shortfall in expenditure. This was the common practice and it did not cause runaway inflation. That came during the 3rd century following the capture of Valerian I by the Persians who turned him into a royal slave. When Valerian I died, the Persians stuffed him as a trophy. This resulted in a collapse in the money supply as people hoarded and feared the invasion of barbarians. This is when the wall was built around Rome by Aurelian (270-275AD).

Should we stop the borrowing and just increase the money supply as a finite percent of GDP? This makes sense when up to 70% of the accumulated national debt has simply been interest expenditures.

« The Confidence Game Has Been Around Forever
Depression vs. “Helicopter Money” »