COMMENT: The following excerpt is concerning Klaus Schwab and the Great Reset. It is taken from an article written by Paul Cudenec, entitled “Wrong Kind of Green.”
“Born in Ravensburg in 1938, Klaus Schwab is a child of Adolf Hitler’s Germany, a police-state regime built on fear and violence, on brainwashing and control, on propaganda and lies, on industrialism and eugenics, on dehumanisation and “disinfection”, on a chilling and grandiose vision of a “new order” that would last a thousand years.
Schwab seems to have dedicated his life to reinventing that nightmare and to trying to turn it into a reality not just for Germany but for the whole world.
Worse still, as his own words confirm time and time again, his technocratic fascist vision is also a twisted transhumanist one, which will merge humans with machines in “curious mixes of digital-and-analog life”, which will infect our bodies with “Smart Dust” and in which the police will apparently be able to read our brains.
And, as we will see, he and his accomplices are using the Covid-19 crisis to bypass democratic accountability, to override opposition, to accelerate their agenda and to impose it on the rest of humankind against our will in what he terms a “Great Reset“.

Schwab is not, of course, a Nazi in the classic sense, being neither a nationalist nor an anti-semite, as testified by the $1 million Dan David Prize he was awarded by Israel in 2004.
But 21st century fascism has found different political forms through which to continue its core project of reshaping humanity to suit capitalism through blatantly authoritarian means.
This new fascism is today being advanced in the guise of global governance, biosecurity, the “New Normal”, the “New Deal for Nature” and the “Fourth Industrial Revolution”.
End of Excerpt 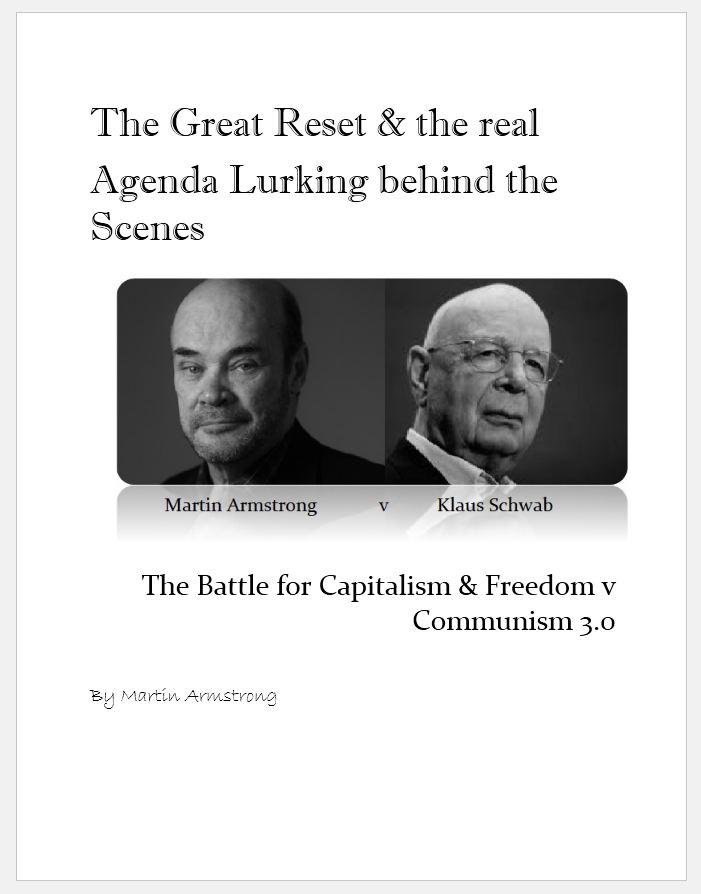 REPLY: I see Klaus Schwab as a very dangerous academic along with his buddy Thomas Piketty. I have gone over both Schwab’s “Fourth Industrial Revolution” and stakeholders economics, which is fascism, and Thomas Picketty’s books, “The Economics of Inequality” and his “Capital in the Twenty-First Century.” I have tried to address every point they make. Piketty’s research is tainted by the fact that he attempts to prove inequality rather than investigate how the economy functions. Schwab is neither a programmer nor does he have any practical experience in the non-academic world. Yet, this dynamic duo has managed to hoodwink world leaders into believing we need a new communist world 3.0.