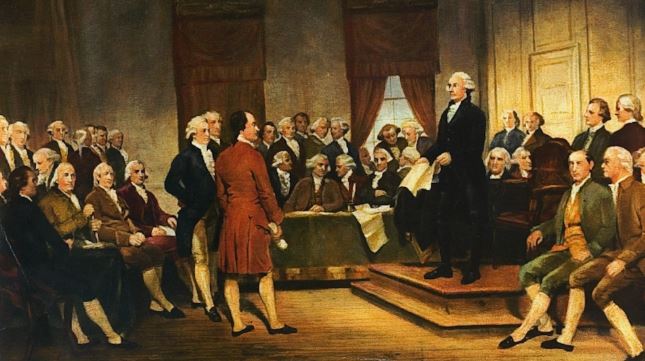 QUESTION: Hi, I am new to Socrates & will try to utilize this wonderful program. A few questions for Mr. Armstrong about the current state of political discourse:

ANSWER: Actually, a Constitutional convention is covered in Article V of the Constitution which provides that Congress shall call a convention “on the Application of the Legislatures of two-thirds of the several States.”  There is no indication that can be inferred from the Founding-era convention practice, that there is any exception suggesting that this clause is straightforward. It is unlikely that the Democrats would vote for such a convention. As such, it does not appear to be a viable option.

There really is nothing in the Constitution that allows for the states or the feds to lockdown the entire country. There have been decisions and historical precedents where those who are sick can be quarantined. But no government in 6,000 years has ever imprisoned the entire population on the theory of protecting public health.

Unfortunately, our legal system FAILS to protect people. It allows the government to do whatever it desires and then puts the burden on the people to go to court. It takes years to get to the Supreme Court, who may just rubber-stamp the government anyway. Our legal system is wholly inadequate and it encourages tyranny as we are experiencing right now.

All state pension systems are going to fail. This is why there is a push to really get rid of Trump so they can usher in major tax increases to bail out the government pensions. The Democrats are advocating the same posture as in Europe. It is the World Economic Forum which under Picketty is advocating a 400% increase in taxes in Europe.

These people are fools. Virtually every revolution throughout history begins with tax increases — “No Taxation without Representation!” The French Revolution — “Let them eat cake!” (which was the crust on pans after the aristocracy ate the pie and bread).

We must be mindful that the left will impose a Communistic-style state in Europe. People will not be allowed to freely move as was the case in East Germany. You will need permission to work and they are already imposing Basic Guarantee Income in Spain, assuming they are destroying your job, so you will be content with a minimal living standard while sitting home watching TV. They have seriously underestimated humanity and this is NOT going to end peacefully. The last time they tried this over 200 million people lost their lives fighting for freedom. Well, they’re back! Just look at the World Economic Forum which supports Gates’ vaccines, sponsored Event 201, supports Thomas Piketty’s 400% increase in taxation, and does not believe that corporations owe anything to their shareholders. One of their trustees is Al Gore and they support the entire destruction of fossil fuels and the zero CO2 agenda.

They even shut down religion under the pretense of this virus, which is the same as the Marxists before. If you make a list of everything the Marxists did before, you will see they are checking them off one by one. In the United States, governors refused to declare religion as essential.

« Is Socialism Dying?
Argentina – Our Model for the What Lies Ahead? »