Terrorism Turning to Knives, Axes & Machete rather than Suicide Bombings 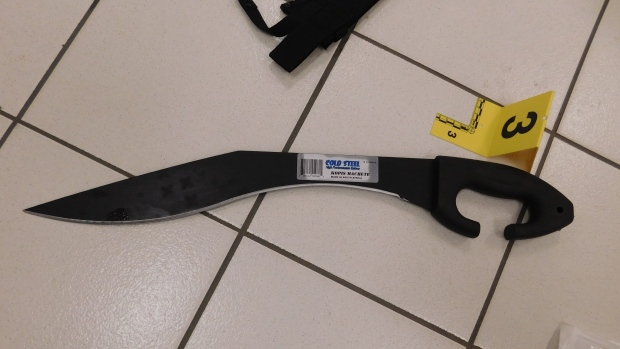 The rise of militant terrorists home-grown is much greater than people realize. No gun control will stop them because the knife, hatchet and machete have begun to replace suicide bombings. It is taking place even in Canada. A man with a machete attacked police in a shopping mall in Calgary. There was the July 18th, 2016 attack of a 17-year-old refugee who injured four people seriously, two critically. He used a knife and a hatchet on a train near Würzburg in Germany. Knife attacks have been reported also in London. Even in Israel they are using knives as weapons of terror.

Hillary blamed Trump for the recent attacks boldly claiming that terrorists are using Donald Trump and his rhetoric as an online “recruiting sergeant,” adding that “the secret is, he has no plan” for defeating them. Meanwhile, her plan is just more of the same to reach out to Muslim-American communities to apprehend troubled individuals; and intensified diplomatic efforts across the Middle East as if that has EVER done any good.

Hillary, as well as Obama, suffer from a serious lack of understanding how to deal with the rising tide of Islamic Terrorism. The Obama Doctrine if there is one, sees the underlying problems afflicting Islam are far too deep for American intervention on any military scale. Obama sees the problems actually as an internal struggle within Islam that is affecting various parts of the Muslim world that is beyond American control. This Doctrine is why he seems to be impudent unable to take any steps that stand the slightest chance of making progress.

We must also realize that Islam is a worldwide religion. In contrast, there are Middle Easterners who interject their hatred of Europe and American that has been ingrained since the fall of the Ottoman Empire. This is in sharp contrast with Muslims in Latin America, the East and Southeast Asia. This is not much different from African blacks who really dislike in general American blacks. The Middle Easterners are thinking about how to kill Americans and Europeans whereas the rest of Islam are concerned about advancing in the modern world. American policy is in danger of glossing over the stark differences.

Some see this clash with Islam as indistinguishable with the battle against Communism. But Communism was by no means embedded within various cultures. Communism was also a brief a totally alien and quite abstract ideology furthered by Karl Marx, inspired by the French, that was purely an experiment that failed for it removed human incentives to innovate. Without human innovation, the very essence of progress within society, productivity collapsed. Islam is a millennium-old religion that was embraced around the world in various cultures. It maybe poverty and economic inequality the breeds resentment behind terrorism, but this is also due to its third-world status lacking the drive of innovation.

This is not a battle that can be won by merely giving them handouts to go away and leave us unmolested. If we cannot invade, then all we can do is vet out those coming from particular countries for it is a cultural hatred, not simply a religious war.