So When Will the Yellow Vest Movement Take Hold in the USA? 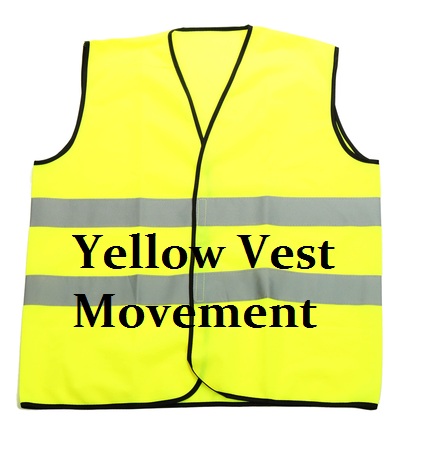 The Yellow Vest anti-government movement (#YellowVests, #GiletsJaunes) began in France on November 17, 2018, when over 300,000 people across France protested a carbon tax on fuel. President Emmanuel Macron claimed the French were leading the world in the battle against climate change. The Yellow Vest protests evolved rapidly into an all-out general anti-government movement that was supported by 70% of the French population. When Macron was forced to back out of the tax, the first thing he did was look for something else to tax to make up the difference. Then the French government had to ask Brussels for an exemption from austerity. This all proved one thing — the fuel tax was really about just raising taxes.

Now, the Yellow Vest Movement has gone worldwide, spreading at first to Belgium, where Brussels riot cops had to deal with them for week after week of protests blocking an oil depot. Then on December 8, 2018, the Belgians attempted to breach a riot barricade while calling for the resignation of Prime Minister Charles Michel, resulting in around 100 arrests. So in both France and in Belgium there are demands for the heads of government to resign.

What is conspicuously absent from the list below is the United States. Trump has rejected the climate taxes and lowered tax rates, moving directly opposite of all the other countries on the list. Nevertheless, the future for the United States is looking very bleak. The budget will force a rise in taxation as more and more government workers retire, thereby dramatically increasing the cost of government. The New Democratic Socialist Party, headed by Schumer and Pelosi, is advocating dramatic increases in taxation following the same course as the other countries on the list below. Our model shows that the Trump Tax Cuts were merely a reaction within a broader bull market trend. That means we should be looking for the next peak in tax rates in 2026. We should begin to see the Yellow Vest emerge in the USA in 2020.