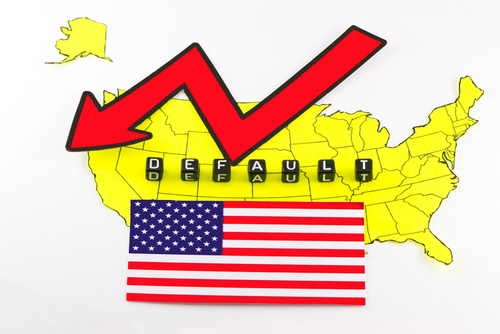 The Debt Ceiling issue is back and of course people will sell the dollar as if the USA would actually default. The bulk of the debt is owned by the government so any default would send the economy down and pension funds from Social Security to government pensions.  Nobody pays off their debts. All countries just add to it year after year.

This time the Democrats are deliberately trying to now force a default so people on Social Security are harmed because they know they have mainstream media plotting with them to destroy the Trump Administration. Why we even have a debt ceiling is absurd since it always has to be raised anyhow and there is no way the debt will ever be reduced. This is another one of those strange things nobody can answer in Washington.

The imminent default of the US government of course would not happen. If I was President, I would cut all salaries and expenses for those in government FIRST. Nobody in Congress will have 10 cents until such a budget is passed. Congress decided on Friday in the fast procedure a bridge financing that will last until the May 5th to avoid the imminent so-called “government shutdown”. But there may be a deal – no funding for Trump’s Wall, symbolic to Democrats, and the budget will pass until September.

The Congress has not yet adopted the budget for the 2017 financial year, which ends on September 30th. The Democrats want to block the plan of Trumps Republicans in to construct a wall on the border with Mexico, and they are fighting to prevent any cuts to Obamacare. They are deliberately trying to sacrifice Social Security now to fund healthcare for “undocumented” illegal aliens and help their insurance companies who have doubled most people’s premiums.

The new emergency budget in the House of Representatives until May 5th, was adopted by 382 votes to 30 votes. In the Senate, approval was given by hand.

The Democrats are trying to orchestrate a shutdown and the media will blame Trump and can be counted on to make sure they will NOT report the truth. The danger with this strategy is more and more institutions will begin to realize our models are correct – avoid government paper and shift to top grade corporate. AAA Corporates do not default and their debt is backed by the assets of the company. Government debt is backed by politicians who can never tell the truth. Once government debt loses confidence among big money, it’s not coming back so fast.