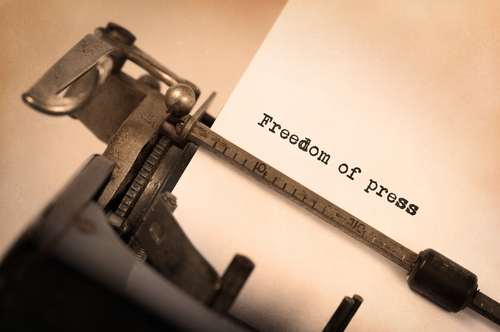 QUESTION:  Mr. Armstrong –
On 08/23 you wrote a blog entry that seems to espouse two incongruous claims: (1) That the press has distorted & propagandized its news reporting so egregiously now that the American people give little credence to what it tells them (as evidenced by the Gallup polls results you showed), and (2) That the press is yet still managing to rope-along enough gullible emotional people that they are dividing the country and will be at fault if it breaks-up. How do you reconcile these two assertions ?: Isn’t it more likely that the press is simply helping to incite those who already left-tending “true believers” as well as the deep state which is the real entity brokering all this enmity against Trump (and the real player with enough clout to foment/incite division of the country in service of its own selfish power & privilege) ?

ANSWER: I do not believe that the press is capable of altering society insofar as changing the minds of the majority. If you look at the presidential elections, only three people EVER won 60%-63% of the popular vote – FDR, LBJ, and Richard Nixon. If you look at the winning votes, you will see that most are in the mid 50% range – (usually 51 to 54%). Less than 10% of the people are independent. The bulk of the people are predisposed Democrats or Republicans. Those who watch CNN do so because they WANT to hear negative things about Trump and those who listen to Fox want to listen to negative things about the Democrats. People far too often believe what they want to believe. That is what I never try to change someone’s mindset – it is pointless. Tech ONLY those who want to learn – the independent thinkers who see life as a quest for knowledge.

The Gallup Poll shows that there is a growing majority of people who are NOT stupid and realize that the press has gone way too far on both sides preaching to their constituents. The poll even back in 2016 showed that only 32% of American trusted the press. Hillary raised twice as much money as Trump for the 2016 election. That proved above everything else that you can run all the TV ads bashing your opponent but you are only really preaching to the mindless people who will vote for their party REGARDLESS of the facts.

The press is increasing the violence factor just as Hillary has justified civil unrest. The problem is you will witness an equal and opposite reaction from the extreme right in opposition to the extreme left. Just as we have witnessed with the so-called pipe bombs that were duds. It is the Deep State who uses the press to shield and legitimize their objectives for they are there for personal power and corruption the same as you see the politicians in Britain calling to remain who have untold wealth involved in pensions from the EU at stake.

The Press is no longer “free” for they have simply become the American version of the old Soviet Pravda. They distort the facts and incite anger. They no longer report the news – they try to make it. Historically, when this takes place, it is part of the collapse in confidence that brings down the government. I went behind the Berlin Wall before it fell. The person I visited would always be looking around and spoke freely when we were alone. As soon as anyone came close, the political rhetoric came out praising how wonderful their government was. Nobody believed the media and nobody trusted the police. I have friends who fled Eastern Europe and came to America and Germany just to mention two. All say the same thing. They fled to escape the corruption and have discovered what they fled is infecting the West just as bad.

« Fake News is Unbelievable – When is Enough going to be Enough
Did Obama Throw Out Fox News? »