Will Social Security Exist in 2021?

QUESTION: Hi Martin,
You mentioned in a 2016 blog post that “We will probably see the end of this Social Security program by 2021.772 (October 9, 2021)”. Does this forecast still have a high probability of occurring? If so, won’t this be devastating to retirees, especially those with little or no retirement savings? My employer no longer offers a pension plan to employees, only a 401K plan.
Ref. “Negative Interest Rates Destroying the World Economy”, Apr 17, 2016.
Kind Regards,
DA

ANSWER: I do not see this unfolding as a default. They will have to revise the system one way or another. There is more likely to be a huge split in interest rates from the private sector compared to the public at the federal level. As I have stated before, I tried to would with Congress back in the ’90s in reforming Social Security transforming it into a wealth fund that was allocated out among managers. The Democrats would not vote for it so this is why Social Security today cannot survive. It invests 100% in government bonds. That means it does not even earn a fair interest rate. 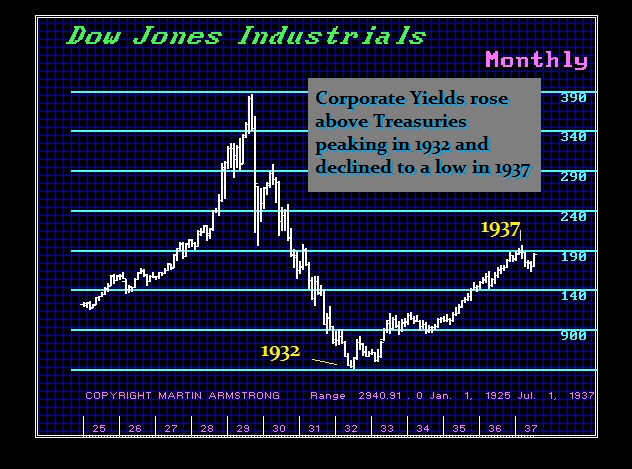 When people feared the private sector, AAA corporate rates soared peaking with the bottom of the stock market in 1932 and then declined to bottom with the rally into 1937. What we face now is the collapse of Social Security because it is restricted to buying only government debt where the interest rates are artificially maintained at absurdly low levels. Therefore, Social Security is already constantly being reduced in benefits. It cannot continue in this manner. It will have to be reformed and changed entirely. I do not believe that they will stop paying people. The way they default is reducing payments and the payments will not be enough to sustain themselves. Look at Venezuela. They honor their pensions, but what you get today will buy only a cup of coffee.

The likelihood of Social Security remaining as it is today is ZERO. Private sector rates will rise v manipulated government rates. We have entered into the Great Unknown economically. The Quantitative Easing of the Bank of Japan and the Europeans Central Bank have wiped out the free markets and ended government borrowing as a viable free market. The far more interesting aspect of interest rates will become the spread between corporate and public at the federal level.

« Finland Government Collapses & Why the Media is Silent
Swiss Occupational Pension Plan Turns Out to be a Ponzi Scheme? »