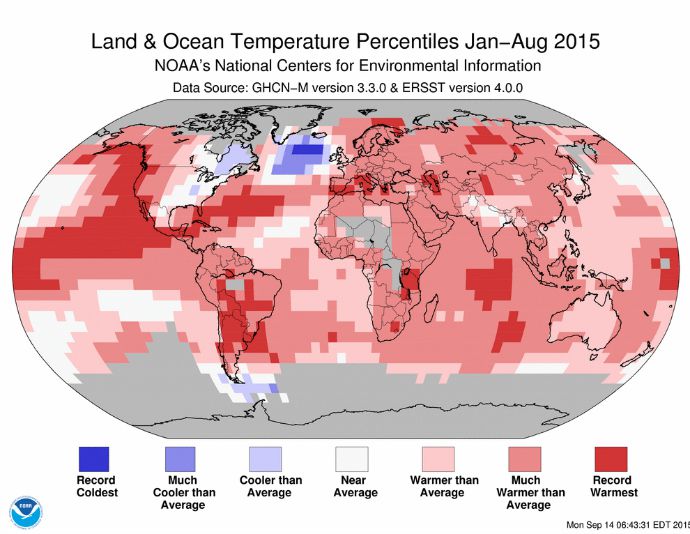 The fascinating aspect of the environment is this unprecedented bias that somehow humankind has altered the climate. Why these scientists do not try to see if such a trend is natural and extends back before 1900 is just mind numbing. A record setting area of cold water was found in the North Atlantic, which has caused some scientists to ring the alarms. The National Oceanic and Atmospheric Administration (NOAA) recently discovered this cold spot data, which is in line with our models that warn that we are in for not global warming, but a deep freeze.

The energy output of the sun is in crash mode; historically this 300-year cycle has marked the rise and fall of empires. With the invasion of people from the Middle East into Europe, there is no housing. They have filled up stadiums and most are living in tents. The winter will be very cold and many may die from exposure. Migration patterns should be south, not north. This is a serious problem from a historical perspective. This is also why we are moving our offices south. If not, the computer may leave on its own.

This trend will have a very dramatic consequence with regard to weather for Europe and North America. When the water turns cold, so does the climate. On Thursday, Washington Post reporter Chris Mooney reported a new thesis from many scientists who have pointed out a cold blob in the ocean south of Greenland and Iceland. This has confused many who focus on global warming, as the North Atlantic cold spot is not well known. The cold spot is seen below in the dark hue denoting “record coldest” temperatures.

If we just take 2015.75 and move back in time in 309.6 year intervals, we come not only to the periods when the climate turned very cold, but we also come to periods of political changes in government. The 1700s marked the start of the uprising against monarchy. The 1396 period market the beginning of capitalism with the Black Death killing about 50% of the European population. The year 777 was the start of the Saxon invasions when Charlemagne began to consolidate Europe, once again forming nation states. The previous cycle was the fall of Rome. These changes in climate have coincided with political changes. The cold climate shift places tremendous stress upon the people and starvation begins to rise.

Unfortunately, this change is not caused by man driving cars to work. We are dealing with a very serious change that is entirely natural. No amount of regulation or raising taxes, which academics and government will argue for, will reverse this trend because we did not create it. This is simply the result of a thermodynamic system we call the sun.