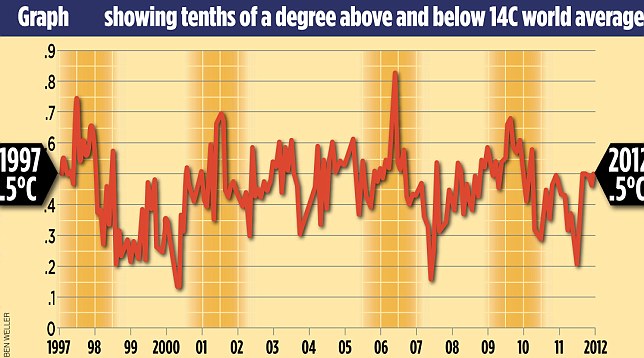 The Daily Mail released the numbers, showing all along that this idea of global warming has been just a natural cycle. London used to be horrible to live in during the summer, when the buses spewed out black exhaust. Today all the buses run on electric or natural gas, and to a large extent, the improved air quality has restored the city. However, that is distinctly different from actually altering the entire planet.

Traveling around Europe on this tour, I personally packed summer clothes but found myself needing to buy warmer things to wear, and should have brought a coat. It was unseasonably cool and did not become warm until I hit Spain. We are moving back toward colder weather, not hotter. The Daily Mail Wrote:

The world stopped getting warmer almost 16 years ago, according to new data released last week. The figures, which have triggered debate among climate scientists, reveal that from the beginning of 1997 until August 2012, there was no discernible rise in aggregate global temperatures.

This means that the ‘plateau’ or ‘pause’ in global warming has now lasted for about the same time as the previous period when temperatures rose, 1980 to 1996. Before that, temperatures had been stable or declining for about 40 years.