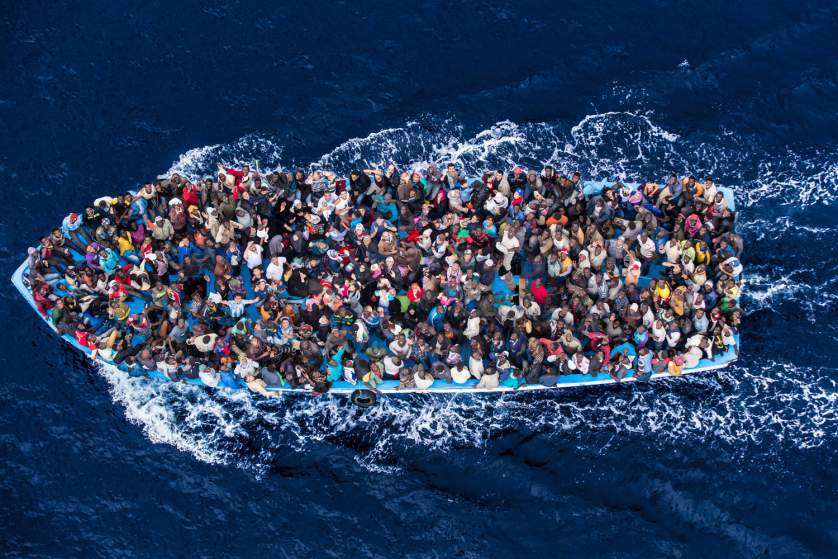 June 7, 2014 – Mediterranean Sea / Italy: Italian navy rescues asylum seekers traveling by boat off the coast of Africa. More than 2,000 migrants jammed in 25 boats arrived in Italy June 12, ending an international operation to rescue asylum seekers traveling from Libya. They were taken to three Italian ports and likely to be transferred to refugee centers inland. Hundreds of women and dozens of babies, were rescued by the frigate FREMM Bergamini as part of the Italian navy’s “Mare Nostrum” operation, launched last year after two boats sank and more than 400 drowned. Favorable weather is encouraging thousands of migrants from Syria, Eritrea and other sub-Saharan countries to arrive on the Italian coast in the coming days. Cost of passage is in the 2,500 Euros range for Africans and 3,500 for Middle Easterners, per person. Over 50,000 migrants have landed Italy in 2014. Many thousands are in Libya waiting to make the crossing. (Massimo Sestini/Polaris)

This is an illustration of how the EU is going insane with the austerity movement when they are in direct conflict with the perpetual borrowing and lacking monetary reform. Italy has cut its budget to the bone. That was the only thing stopping all the refugees pouring into Europe from North Africa, many of which are dying at sea. The Italian Navy did save many, in addition to intercepting the drug trade, but that patrol has stopped as its not in the budget. Many people are fleeing, claiming to be political refugees and thus possess no passports to even prove where they had come from. Economically this is placing a major burden on the economy, and Germany is getting flooded. You can’t turn them back without looking cruel. The whole refugee crisis is really becoming an economic crisis.

« Resurrecting the Woolly Mammoth
When it Rains it Pours Oil »