Ecuador – a Preview of What Is Coming? 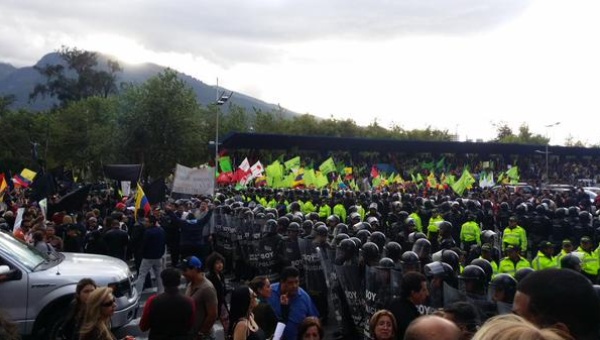 Parallel pro-government employees and right-wing demonstrations have been in protest all week in Ecuador. Large numbers President Rafael Correa supporters, who were generally government employees, gathered on Shyris Avenue to confront their rivals whose money they want to steal. Both sides remained largely peaceful for now, as extra police were drafted in to avoid the pockets of violence of the previous evening.

The people are protesting changes President Correa is set to make on Monday, where his socialist agenda is bordering on virtual communism. The protesters argue he is to impose a 77% inheritance tax on all estates, impose capital gains tax on real estate, and after raiding the social security fund, he is to confiscate 40% more. Additionally, he is to change the military charter from protecting the country and people to protecting the government.

The government has set up a website to allow you to calculate what you will owe in inheritance tax, and of course this will then capture your contact info. You will see two sets of protestors: the larger group represents the people and the smaller group is government employees. Correa forces all government employees to protest in opposition, of course many don’t comply. There are also protests and shootings occurring in the Galapagos Islands (Ecuadorian territory) where Correa has imposed a media blackout. The government is claiming that any pictures that do make it out are of Venezuela.

This is the sad direction the entire world is heading. Socialism supports sustaining government, which of course paints the picture that it is there to support the people against the evil rich. But the rich are effectively anyone with a non-government job.

« Is S&P Playing Dirty Games With Ratings Again?
The Hunt for Cash – Police Have Become Revenue Agents With Guns »