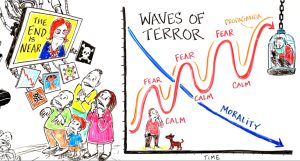 I hope you will have time to read the following about the situation in Québec and hopefully post it on your blog for the benefit of all.

What is going on in the Province of Québec currently is far more serious than the “health tax” brought up this week by Premier Legault.  We are talking about “mass formation” or “mass psychosis.”

As per Mattias Desmet, professor of clinical psychology at Gehnt University in Belgium: The global society is starting to enter a “mass formation” state, a type of “collective hypnosis” required for the rise of totalitarianism.  This formula has been deployed on the global population over the past two years.

Under mass formation, a population willingly sacrifices their freedom.  The following 4 conditions must be present for mass psychosis to happen:

Nonsensical modeling, masking, theatre hygiene, endless numerous lockdowns, school closures & remote learning, a couple curfews (the latest currently in effect), vaccine passport, cancellation of all arts, cultural, professional sport events and religion, etc. have all contributed to set the table for the emergence of mass psychosis as we witness and feel it in Québec today.

As per Desmet, “All that is needed now is a story in which the source of cause of anxiety is identified and spelled out, while simultaneously providing a strategy for addressing and neutralizing that cause.”

The story is about the damage the unvaccinated are doing to the health system!

Most Québécois believed the simi gods running the province were not taking into account the collateral damages of their measures.  In light of the last couple weeks events, with the support of their federal counterparts, it became clear that they were following a well-prepared plan designed to mind control a majority of the population while scapegoating a minority of unvaccinated.

Together, they are trying very hard to silence opposition, period!  This is disgusting in a country like ours.  They know very well what to do to instill “mass formation” and they’ve been at it relentlessly for almost 2 years now.  Undeniably, the end goal is totalitarianism.  We must wake up and quick if we want to avoid the worst for all of us today and for the generations to come.  Nonvaccinated are not criminals.  We must reject any form of induced discrimination based on freedom of choice!

I have this message for my fellow Canadians of the other provinces.  The same “treatment” is waiting for you right at the corner. Recap how things unfolded in your province over the last 24-months and you will see you embarked on a similar journey dictated by emergency orders powers and the accompanying decrees, too many of them very questionable on their impact on the plandemic.

Socrates predictions are unfolding “as planned”!

Reply: I believe more people are finally waking up to the true agenda, but there are many who remain fixated on the initial news. After years of fear-mongering on a 24/7 news cycle, many people are traumatized. All the criteria to put society into a state of mass psychosis have been achieved. However, part of the global population refuses to admit that government and health agencies lied to them for years due to cognitive dissonance, defined as the state of having inconsistent thoughts, beliefs, or attitudes, especially as relating to behavioral decisions and attitude change. Society has been in a confused panic for so long that many cannot fathom the truth — COVID was a scam. Even the New York Times reported that half of Americans still would like to wear masks, despite the CDC and other health agencies admitting they are ineffective.

The site Very Well Mind notes three common causes of cognitive dissonance: forced compliance, new information, and decisions. Forced compliance to COVID laws has ruined lives, but many were left with no other option than to comply for fear of losing employment or even the ability to participate in the public. The health agencies in charge constantly provided the public with new and conflicting information over the years, aimed to confuse and scare us into compliance. The deciding factor was poised as a moral obligation to protect the public despite the fact that the vaccinated can contract and transmit the virus too. People, including world leaders, openly judged and vilified “the unvaccinated” and deemed that they have no place in society.

After years of blind compliance, people are deeply disturbed once they learn the truth. This is leading people to hide their true feelings, justify their behaviors, and seek out information that aligns with their predetermined conclusion. You stayed in your home for months, maybe years. Your children have fallen behind in school, extracurricular activities, and crucial socialization. You missed weddings, birthdays, holidays, and funerals. You took all the shots and boosters and administered them to your children. Was this all for nothing? It is hard to stomach that the answer to the question is YES. 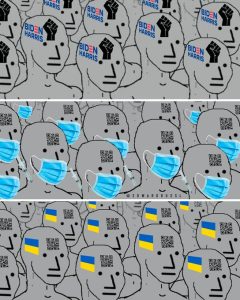 I have reported that there is hope — we are building a herd immunity to fear. The fast-spreading omicron variant helped many to see the light when a growing number of people directly contracted COVID, survived, and realized, “Hey, that wasn’t so bad!” I also stated, “Perhaps the cognitive dissonance will begin to pass; the masses need to become outraged to resist the authoritarian restrictions that have reshaped the global society.” As we have seen with ongoing protests throughout the world, people are indeed waking up to the larger agenda and are not willing to lose any additional freedoms. The only reason some lawmakers are choosing to repeal some restrictions is because they have been met with strong opposition from the people who put them in power. Resistance is not futile. Hold the line.

« Study: Pfizer mRNA Vaccine Integrates Into Our DNA
Klaus Schwab – The Most Dangerous Man in the World »