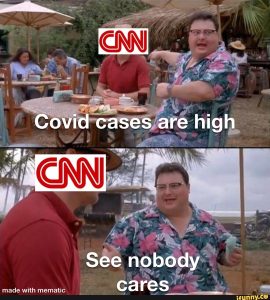 The CDC and NIH refuse to recognize the important role that herd immunity could play in combating COVID. Yet, one thing that they failed to consider was herd immunity to fear. A recent poll conducted by Axios and Ipsos shows that 88% of Americans personally know someone who has contracted COVID. The poll conducted at the beginning of the month marks the highest percentage of respondents who said they personally knew someone who had the virus.

In March of 2020, the public perception of the virus was that anyone who contracted it would surely die a horrific death. The since-deleted videos of people dropping dead in the streets of China and countless images of people struggling to breathe on ventilators took over the media. People were sanitizing their groceries, changing their clothes at the door, and shunning their own family members.

The fear-mongering worked for a long time, and while some stubbornly hold onto those beliefs, a larger number of people are realizing that COVID is simply a virus. As I previously noted, a growing number of people are directly contracting COVID, surviving, and realizing, “Hey, that wasn’t so bad!” Perhaps the cognitive dissonance will begin to pass; the masses need to become outraged to resist the authoritarian restrictions that have reshaped the global society.

Scientists at John Hopkins have said that it would take an infection rate of around 70% to achieve herd immunity. The video was filmed in September 2020, prior to vaccines becoming available and the illusion of vaccines being safe and effective shattering. Fact: the vaccine does not prevent infection. These mRNA vaccines for COVID cannot be compared to a vaccine for an illness such as polio, where eradication is actually possible. The professor in this video admits that the virus will NEVER be eradicated, and that is information the science community has always known. Nearly one in ten people now know someone who has had COVID, and under this pretense, we should have achieved herd immunity by now. COVID is here to stay, and we need to learn how to live with the virus instead of halting our former way of life indefinitely.