False Flags – Not the Fringe Conspiracy but Reality 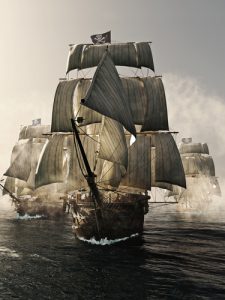 QUESTION: Are false flags by governments part of the end of this cycle or a modern practice? And why is it called a false flag?

ANSWER: No – they are very real. Politicians have made false allegations to start wars and prosecute people politically since there have been politicians. The term “false flag” was coined because it was a ploy used by pirate ships that would fly flags of a friendly country as a disguise to prevent their victims from fleeing or preparing for battle. They would hoist the pirate flag at the last minute. The eventual maritime law by 1914 was that a ship MUST display its national flag before an attack. The Oxford English Dictionary traces the term “false flag” to 1569, albeit figurative: “a deliberate misrepresentation of someone’s affiliation or motives; something used deliberately to misrepresent in this way.” There are many modern false flag events that governments have admitted carrying even against their own people. So false flags are not always some fringe conspiracy.

One of the earliest known false flag events took place in Rome on the night of July 19, 64 AD, when the Great Fire began near the Circus Maximus. The flames were whipped by a strong wind and rapidly engulfed the city. The fire burned uncontrollably for five days; four of the 14 Roman districts were burned to the ground and seven more were severely damaged. Nero blamed the Christians, and many blamed Nero claiming he secretly wanted to build his grand palace. In Germany, during 1933, just a week before general elections, the Nazis set the Reichstag on fire and blamed the Communists to get Hitler in power. The list is far too long to even repeat here in this blog post right down to Dick Cheney’s false flag on Iraq “Weapons of Mass Destruction” to invade Iraq.

Even in American politics, presidents have been directly involved in creating wars with false flags. In the 1840s, the James K. Polk administration wanted to expand slave-holding territory. They needed to expand the borders of the United States in the southwest at Mexico’s expense. They needed Mexico to attack to justify the war. Polk reasoned engineering a Mexican attack was critical. He sent General Zachary Taylor to deploy a force into territory claimed by both the U.S. and Mexico between the Nueces River and the Rio Grande. This disputed territory invoked the Mexicans to attack the Americans. Abraham Lincoln was a first-term congressman who used the incident to become famous himself. Lincoln introduced a series of resolutions demanding that Polk declare whether the “particular spot of soil on which the blood of our citizens was so shed” was American or not. Thereafter, he acquired the nickname  “Spotty Lincoln” which they still called him when he became president.

Even Pearl Harbor was a false flag incident for the US knew well in advance of December 7, 1941, and moved many of the big ships out of the harbor. On January 27, 1941, Joseph C. Grew, the U.S. ambassador to Japan, wired Washington that he’d learned of the surprise attack Japan was preparing for Pearl Harbor. Grew secretly cabled Washington with information gathered from Ricardo Rivera Screiber, the Peruvian Minister to Japan. “Japan military forces planned a surprise mass attack at Pearl Harbor in case of ‘trouble’ with the United States,” he noted in the information that was finally declassified 12 years later. Grew also stated, “There is a lot of talk around town to the effect that the Japanese in case of a break with the United States, are planning to go all out in a surprise mass attack on Pearl Harbour. Of course I informed our Government.” On September 24th, a dispatch from Japanese naval intelligence to Japan’s consul general in Honolulu was deciphered. Washington chose not to share this information with the officers at Pearl Harbor. They knew that only a surprise attack would allow them to enter World War II (“Papers Show Joseph Grew Saw Possible Jap Attack,” Frederick Post, August 4, 1953, p. 2.; “Peruvian Envoy Gave Tip On Surprise Raid Plans”. The New York Times. November 24, 1945. p. 12.). 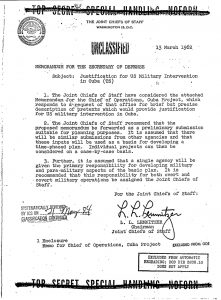 Every single war we have entered from World War I to Vietnam and the invasion of Iraq has all been predicated upon false flags. President Johnson commented privately: “For all I know, our Navy was shooting at whales out there.” Or how about the declassified Operation Northwoods memorandum March 13, 1962, where they proposed killing Americans to justify invading Cuba.

Despite the mountain of evidence, the press endorses war, often instigates it, and then pretends they knew nothing.

« Goldman Sachs Control the SEC
Is Google – not Russia – Manipulating US Elections? »