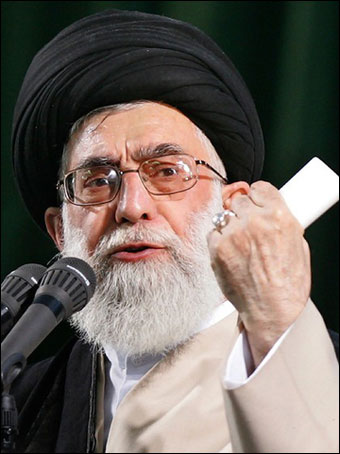 Iranian Supreme Leader, Ayatollah Ali Khamenei, has come out and told the world that two American officials threatened military action against Iran if there was no resolution to the nuclear deal talks. He states that Iran will not succumb to U.S. threats and he will not press forward with negotiations with Western powers under the shadow of threat.

The most fascinating aspect of American military oppression has been their consistent lies to the American people. This has won them the ability to wage every single war up until the Obama attempt to invade Syria. Even Johnson commented that he knew Americans were shooting at whales that night and Vietnam never attacked the USA.

Even the sinking of the Lusitania is very disturbing. The U.S. was smuggling arms to Europe on passenger ships, putting civilian lives in harm’s way for political reasons. The Germans even took an advertisement in the NY newspapers warning civilians DO NOT TRAVEL on the Lusitania. When they sank that ship, the U.S. turned and said how cruel the Germans were to attack a passenger ship.

Then there is the Operation Northwoods which was a proposal of the Department of Defense. The Joint Chiefs of Staff would involve CIA operatives to commit acts of terrorism against American civilians. They would then blame the Cuban government to justify a war against Cuba. The proposals were rejected by the Kennedy administration and has long been part of the reason people support the theory that the CIA is responsible for the killing of Kennedy.

Obama, who has made a mockery out of the Nobel Peace Prize, attempted the standard lie to invade Syria, but the American people rejected it because they became tired of the lies. There were no weapons of mass destruction in Iraq, and Iraq had nothing to do with the 9/11 attack even in fake allegations. The failure of Obama to “sell” the Syrian war to the American people noted the shift in confidence from Public (trust everything) to Private (trust nothing).

Wherever there is military action involved, there are lies to further another agenda. The benefit of a Private Wave is that people begin to distrust government. However, the war cycle turns up and that warns of a rise in civil unrest that can even go as far as a new age of revolution if government does not stop trying to manipulate the people for nonsense.