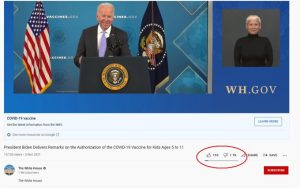 YouTube announced it is removing the public “dislike” button count from their website, coincidentally, following a slew of dislikes on Biden Administration videos. Creators may still see the number of dislikes their videos generate; however, it will not be public knowledge. Although YouTube has been considering removing the feature for a few months, they abruptly pulled the trigger at a suspicious time. One video of the Fauci documentary trailer received 79K downvotes compared to 7.3K upvotes. “Let’s Go Brandon” related videos have gone viral in recent weeks. Numerous videos from the White House were downvoted into oblivion as well. We the People would like to be heard, but the powers that be are censoring our voices. They do not want the public to know that most people are also questioning the current administration, which would hurt the ongoing agenda. The silent majority has been silenced once again.

« The Health Monopoly
The Gates Interview »