Why Climate Change is a Fraud

This is one of the oldest methods to brainwash a population known to ancient history. The high priests had discovered the cycle of the heavens. They would pretend to turn the sun dark, for they managed to calculate the cycles when an eclipse would take place. They would call the people together and tell them what they will do, and they watched the moon block out the sun and believed that the high priest could control the heavens. Today, astrology really comes from the Babylonians who conducted a massive correlation study to predict the future. 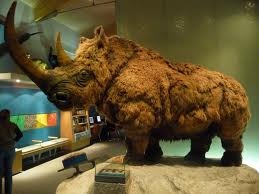 There is a cycle to everything. The climate ALWAYS changes, and there are warming periods and cooling periods. These charlatans are no different than the Babylonian high priests pretending to block the sun with the moon on their command. Science was turned on its head after a discovery in 1772 near Vilui, Siberia, of an intact frozen woolly rhinoceros, which was followed by the more famous discovery of a frozen mammoth in 1787. You may be shocked, but these discoveries of frozen animals with grass still in their stomachs set in motion these two schools of thought since the evidence implied you could be eating lunch and suddenly find yourself frozen, only to be discovered by posterity.

The discovery of the woolly rhinoceros in 1772, and then frozen mammoths, sparked the imagination that things were not linear after all. These major discoveries truly contributed to the Age of Enlightenment, where there was a burst of knowledge erupting in every field of inquisition. Such finds of frozen mammoths in Siberia continue to this day. This has challenged theories on both sides of this debate to explain such catastrophic events. These frozen animals in Siberia suggest strange events are possible even in climates that are not that dissimilar from the casts of dead victims who were buried alive after the volcanic eruption of 79 AD at Pompeii in ancient Roman Italy. Animals can be grazing and then freeze abruptly. Climate change has been around for billions of years — long before man invented the combustion engine.

Even the field of geology began to create great debates that perhaps the earth simply burst into a catastrophic convulsion and, indeed, the planet was cyclical — not linear. This view of sequential destructive upheavals at irregular intervals or cycles emerged during the 1700s. This school of thought was perhaps best expressed by a forgotten contributor to the knowledge of mankind, George Hoggart Toulmin, in his rare 1785 book, “The Eternity of the World”: 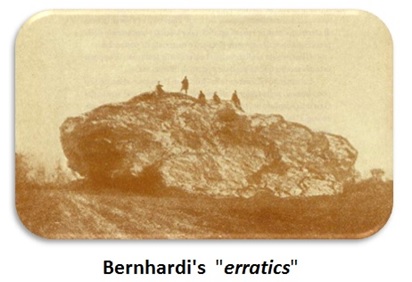 In 1832, Professor A. Bernhardi argued that the North Polar ice cap had extended into the plains of Germany. To support this theory, he pointed to the existence of huge boulders that have become known as “erratics,” which he suggested were pushed by the advancing ice. This was a shocking theory, for it was certainly a nonlinear view of natural history. Bernhardi was thinking out of the box. However, in natural science, people listen and review theories, unlike in social science, where theories are ignored if they challenge what people want to believe. In 1834, Johann von Charpentier (1786-1855) argued that there were deep grooves cut into the Alpine rock concluding, as did Karl Schimper, that they were caused by an advancing Ice Age.

This body of knowledge has been completely ignored by the global warming/climate change religious cult. They know nothing about nature or cycles, and they are completely ignorant of history or even that it was the discovery of these ancient creatures who froze with food in their mouths. They cannot explain these events nor the vast amount of knowledge written by people who actually did research instead of trying to cloak an agenda in pretend science. 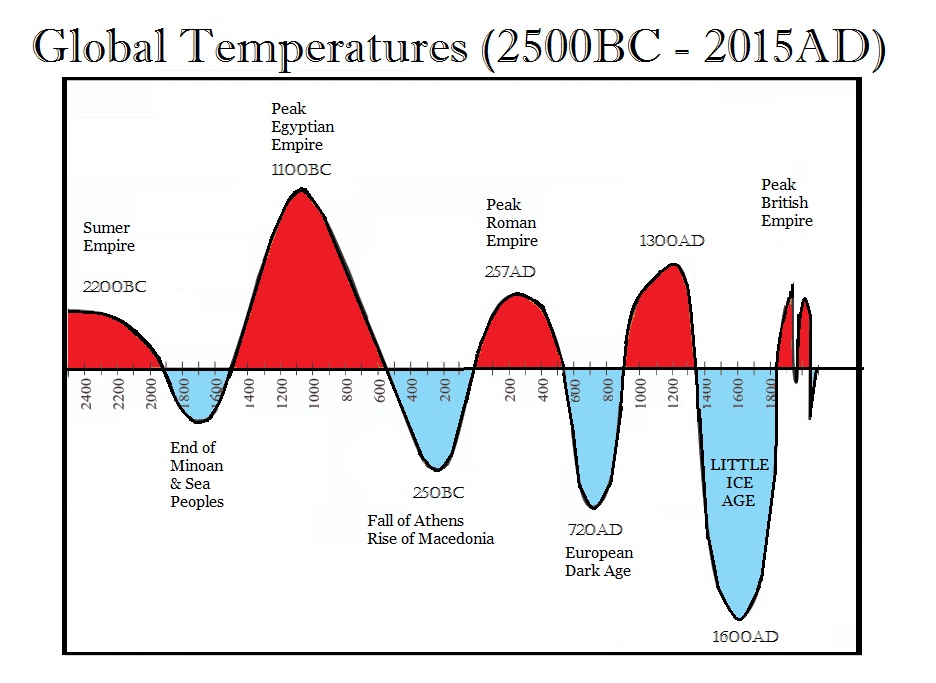 Our model has projected we are entering another “grand minimum,” which will overtake the sun beginning in 2020 and will last through the 2050s, resulting in diminished magnetism, infrequent sunspot production, and less ultraviolet (UV) radiation reaching Earth. This all means we are facing a global cooling period on the planet that may span 31 to 43 years. The last grand-minimum event produced the mini-Ice Age in the mid-17th century. Known as the Maunder Minimum, it occurred between 1645 and 1715, during a longer span of time when parts of the world became so cold that the period was called the Little Ice Age, which lasted from about 1300 to 1850. 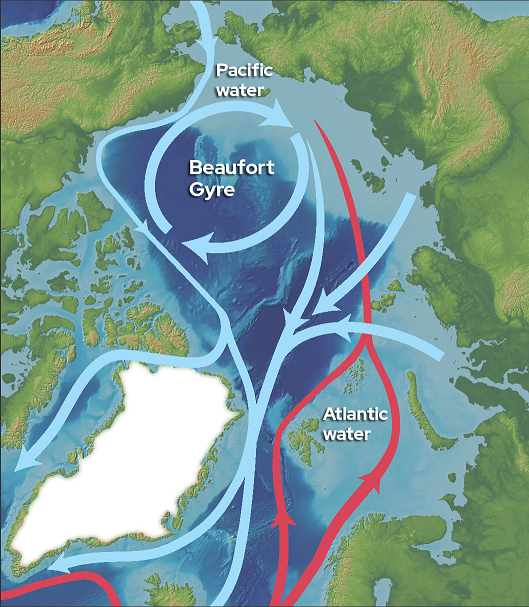 Most people have NEVER heard of the Beaufort Gyre, a massive wind-driven current in the Arctic Ocean that actually has far more influence over sea ice than anything we can throw into the atmosphere. The Beaufort Gyre has been regulating climate and sea ice formation for millennia. Recently, however, something has changed; it is not something that would create global warming but threatens a new Ice Age.

There is a normal cycle that appears to be about 5.4 years, where it reverses direction and spins counter-clockwise, expelling ice and freshwater into the eastern Arctic Ocean and the North Atlantic. The 5.4-year cycle is interesting for it is two pi cycle intervals of 8.6. The immediate cycle has suddenly expanded to two 8.6-year intervals, bringing it to 17.2 years as we head into 2022.

Now, think of the Beaufort Gyre as a carousel of ice and freshwater. Because it is now spinning both faster and in its usual clockwise direction, it has been collecting more and more freshwater from the three main sources:

Indeed, Yale has warned that this current could “Cool the Climate in Europe,” which is precisely what we are witnessing. Cyclically, the Beaufort Gyre will reverse direction, and when it does, the clear and present danger will be the natural expulsion of a massive amount of icy fresh water into the North Atlantic. Remember now, freshwater freezes faster than saltwater. 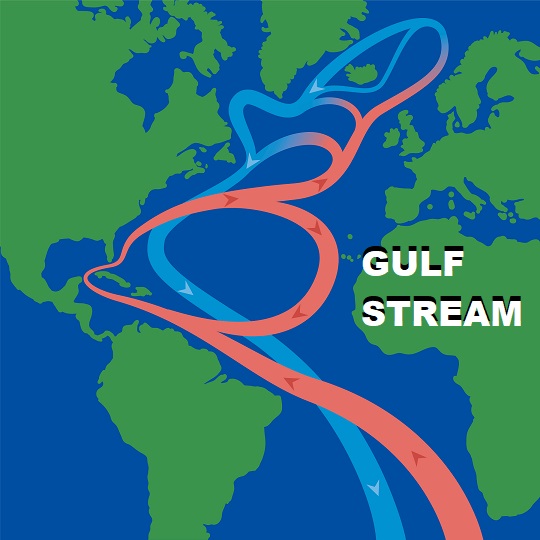 This is not a theory. We have previous records of reversals in this cycle of the Beaufort Gyre from the 1960s and 1970s, where there was a surge of fresh Arctic water released into the North Atlantic that resulted in the water freezing. There has been a lot of work done on this subject, which, of course, is ignored by the climate change agenda that only seeks to blame human activity. Nevertheless, AAAS, of which I am a member, states plainly:

“Arctic sea ice affects climate on seasonal to decadal time scales, and models suggest that sea ice is essential for longer anomalies such as the Little Ice Age.”

Socrates has been given just about every possible database I could find over the past 50 years. Because of the extended 17.2-year cycle in the Beaufort Gyre, the risk that a larger-than-normal expulsion of freshwater into the Atlantic can disrupt the Gulf Stream, which is the sole reason why Europe has been moderate in climate. But that has NOT always been the case. We know that the Barbarian invasions into Rome during the 3rd century were primarily driven by a colder climate in the north. The invasion of the Sea Peoples ended the Bronze Age, and those from the north migrated into the South, storming Mesopotamia and Northern Africa.

It is just not created by humans.

Perhaps we are now at the tipping point, and they cannot keep saying that the extremely cold winter is also caused by CO2 and global warming. The collapse of the gulf stream has nothing to do with CO2. This may result in a major confrontation that these people have been seriously wrong and what they are doing to the economy in trying to shut down fossil fuels at this point in time could result in tens of millions of deaths if the gulf stream collapses.