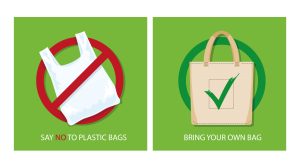 COMMENT: The grocers near me have banned plastic bags. Off timing. Grocery bills are more than I’ve ever seen ..ever. I wont buy as much if theres a few bags per trip. We are lucky to own our homes. Climate change or the food crisis? I see it as a new distraction since they talked of banning them for a long time .. so why now?

REPLY: It is not a far-fetched theory to wonder whether the push to eliminate plastics goes beyond the climate change agenda. Grocery stores have begun banning plastic bags at a time when food inflation is in the double-digits, and the supply chain stalemate has dampened availability. Think about it – the typical American will fill up their grocery cart with food. In other nations, they purchase the ingredients they need for a few days instead of going on major grocery hauls. Limiting American consumers to the bags in their possession could lead to fewer items purchased. This would lower the visibility of inflation and overall consumption.

Over the pandemic, Americans became more self-reliant and began cooking at home 49% more, according to the US Grocery Shopper Trends report. The powers that be, such as Bill Gates, have been pushing for a major change in grocery trends by requesting that first-world nations refrain from eating meat. Gates also cites climate change and not his massive investments in farmland and meat alternatives.

The Environment Agency of the UK released a report in 2011 that found reusable cotton and paper bags have a higher carbon footprint than single-use plastics. A cotton bag, for example, would need to be used 131 times to lower its impact on the environment. While no one is saying plastic bags are ideal for the environment, the rush to ban them is not entirely due to climate change concerns. I believe they are also aiming to change consumer habits at the grocery store.