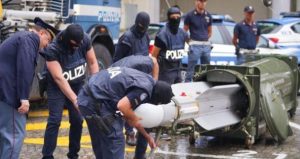 The tensions in Europe continue to rise as the entire refugee issue has led to a major polarization within Europe. In Italy, the BBC reported that an anti-terrorism police unit in northern Italy seized an air-to-air missile and other sophisticated weapons during raids on far-right extremist groups who were combat ready. The missiles belong to Neo-Nazi propaganda groups and they originated from the Qatari armed forces. The civil unrest that our computer has been forecasting on a global scale is here to stay and is heating up as we head into 2024.

Some have tied to link this to pro-Russian forces in Ukraine. Whether this is remotely true is highly questionable. It does seem that any event is being turned into some justification for war. It just seems that we are headed in that direction and this is also part of the agenda to get rid of Trump who opposes any war.