Why Did the Dollar Rally Only After the 1929 High? 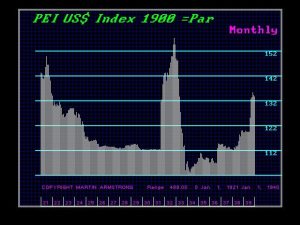 QUESTION: Hello, I am having trouble understanding how capital flows into the US, which helped the Dow double from ’27-29 didn’t move the dollar. Instead, the dollar moved up abruptly when inflows collapsed. It doesn’t make sense to me. Can Marty cover this at the WEC or help me understand in an email or blog response. 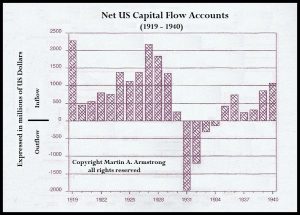 ANSWER: This period was when there was a fixed exchange rate so you will not see the change in the dollar. The capital flows turned out as the crisis took place in Europe and they needed to repatriate capital to cover losses at home.

However, 1931 was the Sovereign Debt Default, which meant the fixed exchange rate system collapsed. This is when the dollar really rose for this was the true value of the dollar during the 1920s due to capital inflows, but it was fixed and sort of like what happened with the Swiss peg. 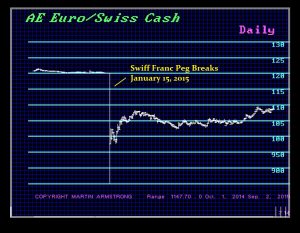 Applying this understand to Japan for the Bubble 1989 top, we see the combination of the rise in the Nikkei in proportion to the decline in the currency which was orchestrated by the Plaza Accord in September 1985. Confidence in Japan was not in question politically. However, the 1987 Crash was a currency move where the fear became whether the dollar would fall another 40%. This caused the Japanese to sell US assets and repatriate their capital home, which then was causing the Nikkei to rise WITH the currency.

If you look closely, you will see that the Nikkei rallied more in US$ than in yen going into the 1989 Bubble top. This is the same pattern currently of how the Dow has rallied from 2009 into 2019 leading the S&P 500 and NASDAQ because it was rising more in euros than in dollars. The 1989 Bubble top in Japan was so severe like 1929 BECAUSE it had attracted capital from around the world which intensified the rally. But when the foreign investors sold, Japan crashed and burned because nobody understood the consequences of capital flows.

Even when the CIA came to us and wanted me to build this model for them and I declined, they understood we invented capital flow analysis and it was the key to the rise and fall of nations.

« Can the US Government Really Force the Dollar Lower?
Capital Flow & War »