Will Big Tech Replace all the Banks? 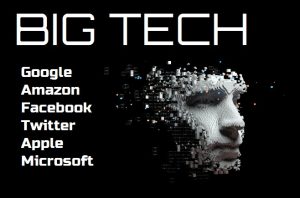 It’s now so obvious…but no one has more to gain with the lockdown(and more to lose with its lifting) than Big Tech.

The lockdown destroyed small and medium sized business, especially those that are in private hands. These were the real target of the lockdown…private property….collapse these businesses and you go at the heart of capitalism…private ownership. Once these were closed by government edict, the agencies then took control and put in place procedures that ensured these companies could never cope with the cost and layer of compliance required…lacking scale and financial resources, many simply closed for good. That was the goal all along. And remains so until only large businesses remain, those that will bend to the will of Government and profit from this reduced competition. And large tech companies are in a unique position to exploit this vacuum because they can become the single source providers of everything…and dictate time and price, point of sale…everything.

Which explains why they have the most to lose from lifting the lockdown, because now everything has been priced into their stock…and their CEO’s are not useful idiots but willing accomplices of this dark arrangement with those working in bureaucracy to further their push into everyone’s life…so, if you want to travel, get used to testing, tracking and vaccines…these carriers took money from govt and now the govt calls the shots…whenever you take money from govt, they own you. Same with big tech…now they are locked in tight to ensure that everything reported by the media via Twitter and Google states that the virus is here to stay and people nee to get used to it…the election gives them a perfect opportunity to trial run so many new initiatives that require we stay locked in and vote by mail…next comes electronic voting from an ap controlled by Apple.

This is pure evil. And why Tech must be broken up.

REPLY: There are a lot of people beginning to question that Big Tech has been conspiring with this Great Reset assuming they will fall within Klaus Schwab’s Fourth Industrial Revolution so they will be fine. They will certainly make fortune from tracking devices, swapping to digital currencies where they hope to replace the banks for if you OWN nothing, you will also have no bank account and banks will no longer be lending and since governments will adopt Modern Monetary Theory, they will no longer need the banks to sell their debt since there will be none.

When we look at the major bank stocks, the ONLY one to peak with the Dow in 2020 was J.P. Morgan. When we look at Deutsche Bank and HSBC, they peaked back in 2007 reflecting their problems. Goldman Sachs peaked in 2018 reflecting its problems in Asia. Behind the curtain, there is pressure not to bail out the bankers again. This is especially true in Europe. This leaves the idea of Schwab as very, very attractive, and therefore crushing the economy and forgiving all debt to banks so you will also OWN NOTHING. Forgive all outstanding debt and property ownership, Piketty’s top recommendation, and you then just rent the place where you live from the government. There are major holes in this theory, but those aside, this explains why Big Tech will replace the banks. They fail to connect the dots that if you also own nothing, they that would apply to shareholders. Does that mean that the Big Tech CEOs simply rise to the top like Russian oligarchs and the companies become their personal wealth?

Big Tech has a lot at stake and they are censoring everything to try to push Biden into the White House so they can cash in on their chips. The mainstream media is also on board and they even forced Glen Greenwald to resign. The media has been also taking grants from the greatest philanthropist/manipulators in history – Bill Gates. That did not happen even with Snowden. If the media took grants would there have ever been a Watergate story?

I recommend you watch the movie Snowden to provide some background of what was at stake when Greenwald broke that story.