Thank you for all the material you post on your blog! I wish I had come across your writings 40 years ago instead of just recently. Does your model include data and predictions for Iceland? Did it predict the collapse in 2008? What is the outlook for the next few years here? Is the worst behind us or yet to come?

Keep up the good work!

ANSWER: Yes. Iceland was the first to go. What I have learned from the study of the GLOBAL economy rather than DOMESTIC theories, has been fascinating. This is why I say the US will be the LAST to fall. Britain abandoned the gold standard on September 19, 1931, when speculative attacks on the pound forced Britain entirely off the gold standard. As soon as that took place, Britain immediately began to recover. This was noticed by George Warren. He was ridiculed as the “farm economist” to somehow discredit him as not being a “real” economist. However, it was that British recovery that enabled Warren to convince Roosevelt to devalue the dollar in 1934 when his entire Brain Trust was against the move.

The difference I have learned from correlating the entire world has been that it is NOT all simultaneous. This is a huge complex system of interconnections and you push on one and you can then see the trend in motion. Iceland was first, which people tend to dismiss and just isolated. Then Greece goes in 2010 and we begin to see how then capital looks around and saw Portugal, Spain, Italy and even France.

The way my forecasts have been so correct or so many things is not because of some luck or unusual gift of opinion. It is simply realizing that everything is connected and the trend in motion will sweep through everything in due course. Gold had to decline from the 2011 high because the cycle was turning and stocks had to reverse and rise.

People do not understand the forces of DEFLATION and INFLATION. Warren saw it in his mind’s eye. Why is there DEFLATION? It is this shift away from Private Assets and the sudden rise in demand for cash. The purchasing power of money then rises and assets must then fall. INFLATION is when the purchasing power of money falls and the valuation of assets rise. It is simply wrong to define INFLATION as a rise in the quantity of money for that is purely a primitive understanding that is isolated to a closed economy purely from a domestic viewpoint. The increase in money supply of the Fed produced NO surge in inflation. As long as people keep defining INFLATION and the rise in the supply of money, they will never understand the economy. INFLATION can unfold even without an increase in money supply if the people lose confidence in government and thus that will transfer to money. 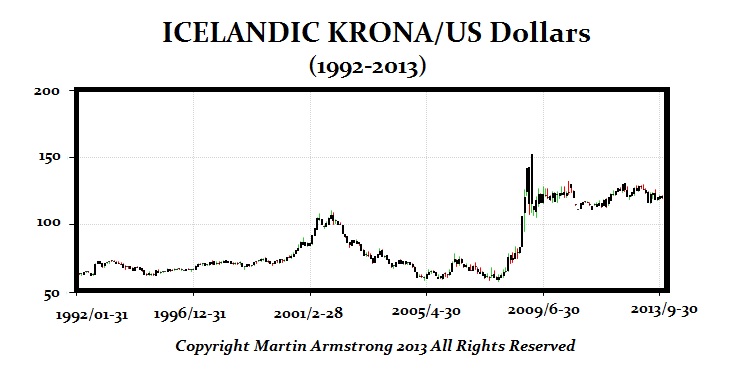 The financial crisis of 2008 was devastating no doubt. In 2008, with the EUR/ISK rate surged from 90 krónur to the euro in January to 305 krónur to the euro in October 2008. This impacted the liquidity issues of Iceland’s three large banking groups — Glitnir, Kaupthing, and Landsbanki. In November 2008 the Icelandic Parliament passed an act amending the Foreign Exchange Act of 1992, granting the Central Bank of Iceland the authority to issue new Rules on Foreign Exchange. On November 28th, 2008, the Central Bank of Iceland (CBI) issued new Rules on Foreign Exchange, replacing them on December 15th, 2008 by a second set of rules.

As for Iceland, you will be the first to rise economically being the first to fall. You did imprison two bankers – the first to do so, But your mortgage structure presents problems. Taking mortgages and indexing them to the rise and fall of the currency on world exchanges did not help for long-term stability. This transfers the risk to the people where their mortgages can rise in real terms.

As far as its debts because of the banks, it should simply default. If no one would lend to the country, that would be fantastic. It would force fiscal responsibility. But that is not what happens, Spain and France were serial defaulters. Yet people still kept lending again and again. So I would not worry about that. Default and walk away. The world will then look at you from a fresh start.