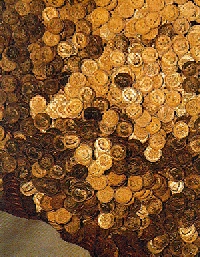 QUESTION: If gold is a hedge against government, then that would explain why gold rose from 2007.15 to 2011.45, a period which your model shows lower confidence.

If confidence in government is now rising, as predicted by your model, regardless of the inflation, people have confidence in QE, etc so will feel less need to hedge against government with gold.

Presumably, we may see interest rates starting to crack in 2015.75 if that is the case, and confidence in government policy will decline for five years, with gold rising that period.

ANSWER: The Yearly Bearish in gold is well below the market under $700. So it is not in danger of moving into a bear market long-term. Reactions are 2-3. Short-term bear markets last 5 years. After that, then you are into a 12-13 year event and the 19-20 year event. However, move beyond that you go the full boat 23-26 years. There appears to be no danger of that in the case of gold or even the share market.

Insofar as price is concerned, technical support is typically the previous high, which in this case is 1980 and that would be $875. So we see this more as a water-boarding torture event with the sensation of drowning only. There is so much bullishness out there concerning gold (bearishness on the dollar) that it is more likely to be a fight all the way down until the towel in thrown in at the low as was the case in 1999 and 1985.

We are in the process of some serious economic evolution. It will take time before the majority wakes up and sees the global economy. The central bankers saw it in 1927. But they could never articulate that to academics or government. It took George Warren, a farmer-economist from the lunatic fringe to convince Roosevelt to devalue the dollar. Roosevelt’s entire “Brains Trust” who were his academic team was opposed to any devaluation just as they argue for austerity in Germany today.

« Welcome to the New International Currency – the Dollar
Shifts in Pensions »