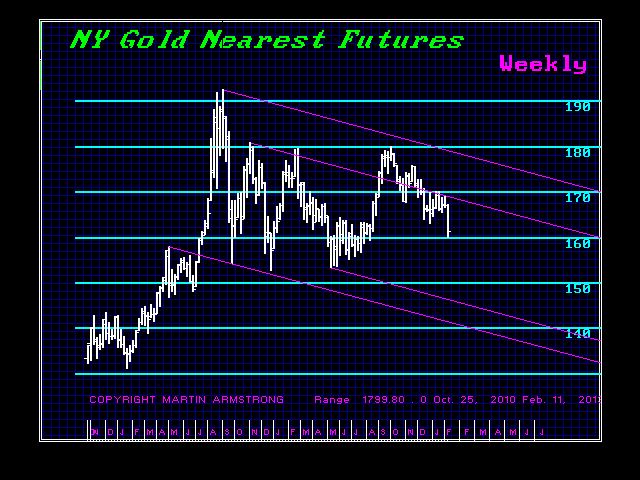 The key support on the weekly level in gold lies at 15795. A weekly closing below that will  eventually be followed with a test of the 14100 to 14600 level. This is the bottom of the channel where gold should eventually test. The time for a rally in gold remains after 2015.75. This has been a lot of hype, but in “real” terms adjusted for inflation, gold has yet to breakout above the 1980 high whereas the Dow has. Eventually, gold will come into its own. However, it is just a question of time. That is what our computer is damn good at.

The golden rule about fundamentals is they are interpreted according to the trend. When everything is bearish, good news is interpreted as “not good enough” and when the trend is bullish, bearish news is always ignored. It is not the news, it is always, and without exception, the sentiment that counts.

The next Golden Rule is the majority MUST always be wrong. This is the actual mechanism that drives the market trends. When the majority are caught on one side, panic strikes for they have to shift direction and there are few on the opposite side to absorb the trade. Thus, like Japan, everyone was long the Nikkei. The market could not rally for 23 years because the weak longs were always there to sell rallies. Flash crashes take place because everyone who is LONG tries to sell and there is no bid. It is not shorts.

Consequently, shaking the weak longs out of the trees is healthy for a market for it is renewing the future buying capacity and removing those who will be selling rallies. The Sovereign Debt Crisis Conference in Philadelphia March 16th, is going to be very important for the average person to understand the nature of the beast that we are confronted by. As Hoover wrote: