Germany is obsessed with hyperinflation just as the US is obsessed with reliving the Great Depression. Neither one even understands their own history. This interesting aspect is that despite all the press at the time, FDR did not follow the austerity advice of his Brains Trust who were lawyers. It was George Warren who saved the day and it was not STIMULATION of increasing the money supply that turned the tide, but the devaluation of the dollar. 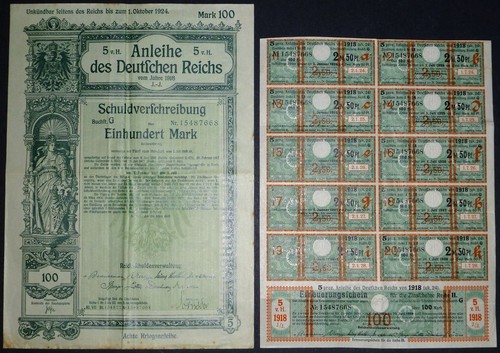 Germany, on the other hand, simply remembers the hyperinflation. It’s view of history is so distorted it is as if it assumed that because someone eat a carrot and died, then that was the cause. They completely miss the point that it was a revolutionary government that INVITED the communists from Russia to come in and take Germany. The revolutionaries defaulted on all previous government debt as this 8th issue 1918 German War Bond and nobody in their right mind would put money in a bank or buy bonds from a bunch of zealot thugs. Hence, all they could do is print and they lived in a dream world where communism would create a perfect society and thus the state could just print whatever it needed as if it were money from above. There was NO concept of even how to run an economy. Grover Cleveland said it best during the Panic of 1893 from observing the consequences of fiscal mismanagement. Capital can refuse to invest, move offshore, and hoard. But the average person cannot hoard his own labor and survive. Attack capital and you destroy the economy – what is so hard to understand about this?

Only after the collapse of the Wiemar Republic did Germany sell tens of thousands of bonds to American investors in an effort to recover financially from World War I and the chaos of hyperinflation caused by the revolutionary nut jobs. Later, Adolf Hitler used some of the money raised by those bonds to build the powerful Nazi war machine that would ravage Europe during World War II. Then that debt was defaulted on again.

The German fear of hyperinflation is just crazy. No mainstream government has EVER expired in such a manner. The danger of mature economies is deflation as government needs money, increases taxes, and sucks the lifeblood out of everything. How exactly is austerity going to create jobs for the 60% unemployed youth? You cannot oppress capital in such a manner for it results in precisely what Europe is experiencing – the collapse in economic growth. Mature economies die by their own hand – it is always suicide.

The German high court will rule on the ECB policy of stimulating and whether or not it is within their legal authority. It is not. So this is going to be interesting as to how Europe shakes out. The flight to quality has people shifting to German bonds on the assumption that the collapse in the Euro will mean they get Deutsche marks.

« German tourists to be protected by German Police in Greece!
Euro Forecast »